Before reading, take a look at this.

This is just one of the reasons for why Juan Agudelo is tipped to be one of USA’s most promising prospects at age 20.

Agudelo, the Colombian-born American, looked to have finally got the chance to show off his talent on the European stage with a move to Stoke City looking to have  been secured. The transfer broke down on the 20th November after his work permit was turned down with there being no option to appeal the decision. It looks as though for now, Agudelo is to remain at New England Revolution where he was expected to be playing for the Revs for just three months after his trade from Chivas USA on August 5th. Agudelo tweeted out after the hearing: ‘God has a plan I know it.’ What could that plan potentially involve?

It’s a bitter pill for Agudelo to swallow. The 2013 season has been Agudelo’s most productive season yet with 9 goals in 20 appearances (14 for New England, six for Chivas) and has shown a far greater level of consistency than in previous seasons. His dribbling ability and close ball control can be mesmerizing at times while his ability to do the unexpected can leave supporters drooling. His one v one ability and off-the-ball movement can also be a joy to behold. Yet again though, injuries have prevented the American from reaching new heights. Injury prevented Agudelo from being part of what culminated to be a trophy winning Gold Cup Squad in the summer which, if he played and performed well, may have placed him firmly in contention for the World Cup squad.  Injury also deprived the striker of netting more goals, a goal per game ratio of 0.58 and shot conversion percentage of 30% (leader of all players under 24 in MLS) suggests a player on an increasingly steeper upward trajectory.

It is also worth noting that Agudelo has alternated between playing the lone striker role and the right side of the midfield in Jay Heaps’ fluid 4-1-4-1 formation, scoring vast number of goals from right midfield is far from easy. 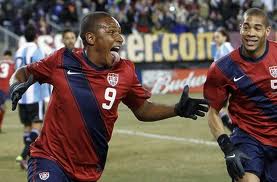 Stoke City chief executive Tony Scholes’ summarised his feelings when the hearing reached its conclusion -‘bitterly disappointed’ and that himself and Mark Hughes were ‘’left amazed that our application for a work permit for Juan has been rejected when you compare his talent and ability to players who have been granted a work permit on appeal in the past”. A statement hard not to disagree with.

Agudelo’s rise to prominence ultimately began after a goal on his debut against South Africa in November 2010 where his solo goal made him the youngest USMNT goalscorer in their entire history at the age of just 17. An equaliser against South American titans Argentina in the friendly in March 2011 further elevated his status and reaffirmed his ability. At the time, Agudelo was competing with an individual titan, Thierry Henry, to try and break into the New York Red Bulls first XI. Chances were hard to come by but Agudelo was still able to net six in 27 appearances (12 starts). 2012 was a disappointing year for the US international though as he scored only three goals for Chivas USA, making his chances to return to the national team far more limited.

Agudelo’s move across to England may not have been a success anyway. The closest comparison to make to Agudelo is Brek Shea, the tall, promising young winger who went from FC Dallas to Stoke City in the hope of taking his career to the next level. Thus far, the transfer doesn’t look to have worked out with only two appearances to his name. Shea looks likely to be loaned out to a Championship club in the hope he can put in enough impressive performance to merit getting into Stoke’s first team. Jozy Altidore is another who has been struggling in his first few months at Sunderland; however, the New Jersey native has shown glimpses (and has the credentials) to suggest he has what it takes to become an established Premier League striker.

2013 had been excellent for Agudelo and the timing of the Stoke deal looked to be perfect. With the move broken down though, what should he do now?

Agudelo would undoubtedly have options in Scandinavia, Belgium, Portugal etc. Perhaps the most fitting move could be to go to the Eredivisie. Altidore had experienced great success with his time at AZ Alkmaar, notching 39 goals in 67 appearances. The Eredivisie is renowned for being a stepping stone for some of the world’s most prolific goal scorers (think Luis Suarez). It’s unsurprising when you consider that the Eredivisie records the highest average goals per game in any major top tier division in Europe at 3.43 goals a game. Fellow Americans Jozy Altidore and currently, Aron Johannsson, have done extremely well in Holland in the past and present. Agudelo could well do the same.

Agudelo’s best alternative may be to not move at all. The striker has performed excellently since arriving in Boston and has thrived with exciting young talent around him such as Diego Fagundez, Kelyn Rowe, Andrew Farrell etc. New England broke into the MLS play-offs for the first time since 2009 in 2013, why break up a team which looks to be evolving into formidable competitors? Perhaps in a few years New England could match the ambitious expectations of Agudelo and win an MLS Cup. The American would be almost certain of retaining a first team slot, perhaps a DP contract as well. Remaining with the Revs could see some consistency in Agudelo’s career where he has already moved three times in the space of two years.

Agudelo’s transfer to Stoke looks to have completely broken down, a knock-back for sure but now means the 20-year-old has a wealth of opportunities open to him after a successful 2013 season. This could be a blessing in disguise and, as Agudelo may put it, may all be part of God’s plan.