Italy has the largest number of cases of the virus in Europe and, as a result, many schools and colleges have been closed in Milan – though the local transport system is still operating.

Inter were one of four Serie A clubs to postpone their weekend game due to the measures implemented by Prime Minister Giuseppe Conte’s administration. Talks then took place between the club, government officials and UEFA on Monday, after which the 600-plus Ludogorets fans planning to travel from Bulgaria for the game at San Siro were informed that their tickets were now invalid.

Some 30,000 home fans had also paid to see Inter attempt to seal progress after a 2-0 first-leg win. However, the home tifosi will not be left out of pocket, as the nerazzurri hierarchy have since indicated they will all be reimbursed.

Ludogorets players wore medical face masks and gloves upon their arrival in Italy on Wednesday, as it was also announced that Sunday’s much-anticipated derbi d’Italia – between Inter and Juventus – would also take place without fans present.

So, with fans travelling far and wide across the continent and the virus threatening to reach pandemic proportions, could future European fixtures be in jeopardy of postponement or cancellation? Of course, this is hardly the first concern of the besieged World Health Organisation, but the upcoming summer of football could very well suffer disruption and delay as a result of an increasingly globalised crisis.

Fortunately, no other games have been affected by such precautions as yet and the last 16 will be decided on Thursday night.

Glasgow giants Celtic and Rangers prepared for their games in the knowledge that their first leg efforts not only put both in a good position to make the next round, but had also secured Scotland two Champions League places for the 2021-22 season.

Although these national co-efficients are seemingly indecipherable to mere mortals, they are essentially based on the results of each association’s clubs in the five previous Champions League and Europa League seasons. In fact, Scotland is – somewhat unexpectedly – currently the 6th ranked nation for coefficient points gained so far this season. 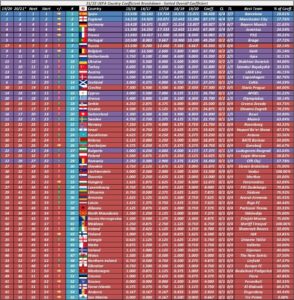 Celtic now host FC Copenhagen, after Fraser Forster saved a late VAR-awarded penalty at the Parken Stadion to secure a 1-1 first-leg draw. However, the perennial Scottish champions will rue a host of missed opportunities and their repeated denial by the heroics of Forster’s opposite number Karl-Johan Johnsson.

“I thought we had good control of the first half. (Then) we gave away a poor goal and it gave Copenhagen a huge lift psychologically. On the counter-attack we had great chances in the second half as well, so I’m disappointed we haven’t come away with more goals.”

The Bhoys’ European knockout stage winless run away from home may now have been extended to ten but they must still be favourites to progress, even if skipper Scott Brown limped out of the first leg and subsequently missed Sunday’s 3-1 win over Kilmarnock. James Forrest and Oliver Ntcham were also unavailable, so Lennon could be without all three – plus Ryan Christie, who is out after being given a one-game suspension for a booking picked up last week.

Ståle Solbakken, long-serving Copenhagen coach, will again be without several significant squad members, including ex-Ajax man Viktor Fischer and Nicklas Bendtner, formerly of Arsenal and Juventus (yes, that really did happen). Jonas Wind and Nicolai Boilesen are also expected to miss the trip from the Parken to Parkhead.

For their part, Rangers enjoyed a breathtaking come-from-behind victory at Ibrox, as midfielder Ianis Hagi reaffirmed his vast potential in scoring a brace to help his side come from two down to beat Braga – recent conquerors of both Porto and Benfica. In Wednesday night’s return fixture, their 1-0 win sealed another taste of European action for the formidable Ibrox faithful.

In Amsterdam, Ajax will need to lean heavily on the inimitable atmospherics of their Johan Cruijff Arena – and the fast-fading memories of last year’s improbable Champions League heroics – when hosting La Liga overachievers Getafe. Less than a year since reaching the semi-finals before a cruel elimination on away goals by Tottenham, the Eredivisie champions could now exit the Europa League at the last-32 stage after going down 2-0 in Madrid.

Though they currently top the Eredivisie standings, Erik ten Hag’s side struggled for fluency last week: failing to register a single shot on target despite having 65% possession. As if to demonstrate their travails, the ball was actually only in play for less than one half (42 minutes and 36 seconds) of the game. Jose Bordalas’ flawlessly-drilled Getafe sit a scarcely credible third in La Liga and goals from Brazilian duo Deyverson and Kenedy gave them the first-leg edge, as Ajax failed to notch a valuable away goal.

There may well be bad blood seeping into the return match too, after controversy arose throughout last week’s game. When former Watford defender Allan Nyom rolled around on the ground following a challenge from Ryan Babel, the ex-Liverpool and Fulham man was booked for a high tackle. Bizarrely, Babel then threw himself to the ground and rolled around, mocking Nyom’s supposed overreaction. Following that and a further round of handbags with his adversary, the 33-year-old forward somehow avoided a second booking, though was later censured by his angered manager.

And, in an incident which may have more far-reaching implications, after Deyverson had given Getafe the lead last Thursday, the loanee from Palmeiras celebrated in front of the Ajax fans – being particularly keen, for some reason, to show them a tattoo on his thigh. Like Nyom, he went to ground, though apparently after being struck by a lighter.

Ajax have since confirmed that UEFA have seen images of objects being thrown, while several seats were also damaged. They now face possible sanctions, as their fans have twice caused disturbances in the Champions League already this season, against Chelsea and Valencia. A decision is due on Thursday, when any negative verdict could prove a double blow because, as one of the most tightly-organised defensive teams on the continent, Getafe must be favoured to grind out a result away from home.

Elsewhere across Europe, sides including Wolves, Frankfurt, Sporting, Basel, Arsenal and Roma should also be fancied to advance after fruitful first legs, while several other ties remain delicately in the balance.

The draw for the last 16 takes place on Friday, at noon. Those ties are scheduled for Thursday March 12 and March 19, though the dread hand of a global health crisis may yet intervene.