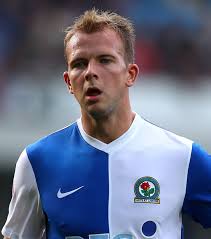 Before you read this article, you must know that I am an avid Blackburn fan, and although I will try my hardest not to be biased about the best striker to play at Ewood Park since Alan Shearer, I no doubt will be.

I mean that claim by the way. Jordan Rhodes is the best striker Blackburn Rovers have had, since that incredible title-winning 1995 in which the Premier League’s all-time top scorer Alan Shearer donned the blue and white of the Rovers. A bold statement to make, but one that many fans of the Lancashire club will agree with. The 24-year-old Scotsman is a revelation.

It has been a tough few years for Blackburn. Off the pitch controversies involving Blackburn’s barmy owners, the millionaire chicken farmers from India otherwise known as the Venky’s, have caused a terrible turn in the on-the-pitch fortunes of the former Premier League winners. Rovers were relegated soon after the idiotic Indians took over, and mismanagement of the club has caused financial turmoil and in-fighting between the executives and board members.

Three managers came and went in Blackburn’s first season in the Championship, and a poor lower-half finish in the second tier means that one of the founding members of English football are in real trouble, both economically and in football terms. It is a sorrow time for us Rovers fans. But there is one positive to come from all this. The silver lining of our dark, dark cloud, you could say. And that is Jordan Rhodes.

The young forward was brought in from Huddersfield for a club-record fee of £8m at the start of Blackburn’s first Championship season, which was a bold move considering the financial losses a Premier League relegation brings. Fortunately for Rovers, it paid off. Big time.

The Scotland international hit the ground running at Ewood following a sensational spell at Huddersfield, that saw him win the League 1 golden boot and attract huge attention from a whole host of not only Championship, but Premier League clubs, and without his firepower up front in that debut season, there is a high chance that Blackburn would have suffered double relegation to League 1.

Us Rovers fans owe a huge amount to the young man, and we are proud to say that arguably the most prolific British striker for generations is a Blackburn player.

Of course, we must now talk about the player himself. He first impressed as a teenager at Ipswich, but it was after he joined Huddersfield that he gained major media attention, and it was Blackburn who won the dogfight for his signature. Inevitably, comparisons with Blackburn legend Shearer were drawn up, and the two strikers do undeniably share characteristics.

Rhodes is not the quickest striker you will see, but this lack of pace by no means stops him excelling when he plays. He has a brilliant change of pace, and he is a great target man. It is not easy to hold the ball up and battle in the air with some of the centre-backs playing in the Championship, because they are often brutal. Most strikers are swallowed up by the aggressive, solid approach of these players.

There is one forward, however, that these defenders dread coming up against; Jordan Rhodes. His strength and ability to hold onto the ball when all sorts of tackles are flying in is unmatched in most strikers, even at the highest Premier League level, and this makes him a feared opponent. Rhodes embarrasses and demolishes defences all by himself.

All these skills are a major part of the Scotsman’s game, but we have not even touched upon his greatest talent; goals. And lots of them. Rhodes is the complete goal-scoring package. He is a predator in the box, always in the right place at the right time, and when the ball falls to him he consistently converts. He can score with his head, he can score tap-ins, and he can dribble from the half way line and find the top corner from 20 yards. You name it, he can do it.

No player has a better talent inside the box, and it is almost an impossible task to stop the young man from finding the net. Since joining Blackburn, he has converted 43 times in just 70 appearances, a phenomenal record at any level. Before that, he scored an equally impressive 73 times in 110 games for Huddersfield. These are goal-scoring feats unmatched anywhere in England.

Inevitably, form like this is bound to attract attention from bigger clubs than Blackburn. Many Premier league teams have been linked, including Fulham, West Ham and even Liverpool, and Championship side Bolton also showed an interest.

Blackburn are in massive financial trouble, with their debts reaching as much as £50m and net losses of huge figures being reported, so why has Rhodes not been sold? A large sum of money would be received, and a cheaper replacement found. But there is a simple reason why he is still a Blackburn player, and that is the fact that he is just too good to lose.

Rhodes’ goals effectively saved Rovers from relegation last season, and they are funding a charge for the play-offs in this current campaign. Selling Rhodes would be a huge, possibly fatal step back for the club, however much money the club receives for his services. He is not just a crucial goal-scorer, but a leader, a player that will inspire the rest of the team to victory. The fans adore him, too.

What is even more impressive about Rhodes is that he has all this talent, all these attributes, at the tender age of 24. It feels as though Rhodes has had an incredible career already, considering his club and international achievements, but he still has his whole career ahead of him.

Surely better things are to come from Rhodes at the highest level, be it with Blackburn, or a top, top club. He is a crucial part of Rovers’ team, and the club would be at a stand- still without him. He is a shining star in a modestly average squad. He is bound to be a legend at Ewood should he stay.

Mark my words, Rhodes will play at the very highest level, and I wish him all the luck in the world. Maybe his performances will be enough to take Rovers back to where they belong, the Premier League. Believe me, he’s good enough.

One thought on “Jordan Rhodes: The next Alan Shearer?”