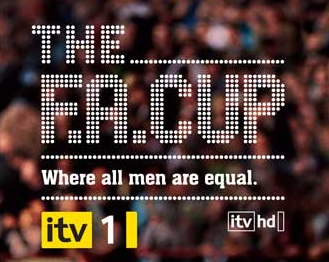 Is football boring you? Do you wish there was a little bit more to a match than one team playing another? Yes? Good, then ITV’s FA Cup coverage is just for you!

Football doesn’t really need any stories, in fact it can survive perfectly fine by itself due primarily to the 90 minutes of action it involves called football. From first to last whistle stuff happens. Occasionally people score goals. Some people like that bit, others get a bit angry. Then some person from another team will score a goal. Some people like that, some others get angry. When people aren’t scoring goals, other things happen. Sometimes people do a spot of cheating. Some people decide to hurt other people. If all else fails, a universal hate figure – clad in black and jogging round like a headmaster – pops in and does something to anger everyone. At the end, everyone is suitably overjoyed, angered or just plain tired.

But that is not enough. Not according to the brain trust at ITV who have taken it upon themselves to launch ‘Adrian Chiles’ Football Stories’ on the nation, masquerading flimsily under the banner of ‘FA Cup Football.’ Now, ITV football coverage is awful. It always has been and, seemingly, always will be. However, their usual shitefest – Champions League Football – does not require the narrative forced upon us with their FA Cup coverage. With the Champions League, ITV can just rely on jingoism, as swashbuckling John Bull takes his brand of ‘up and at them whackaball’ from the ‘best league in the world’ and shoves it straight down the throats of an assortment of Johnny Foreigners until, finally, they submit and lose to our all conquering heroes. On the (frequent) occasions that this does not materialise, then rest assured the experts at ITV will luckily turn to their stereotypes and come up with a reason for the shock defeat. Maybe the Italians did a bit of pushing and shoving in the penalty area. The Eastern Europeans no doubt profited from the (almost certainly) illegal backing of a rich oligarch, while the Spanish sides are just ‘technically better.’

ITV football coverage, therefore, is always bad, but you do not realise how bad until the FA Cup rears its head. In many ways, this makes their coverage much like having a shit on a train. You know it’s going to be awful, you’ve seen the toilets enough in the past, but how awful only becomes apparent when you actually need to do the deed. As you walk in you’re confronted with the unflushable, bland, murky toilet (Adrian Chiles). At his side is a functional sink but nevertheless one you don’t really want to get to close to (Gordon Strachan). There’s the new, supposedly flashy toilet lock (Gareth Southgate) – the lights are on but nothing is working, and then there’s the new recruit (Lee Dixon) – a soap pump with the best intentions but, ultimately, empty when needed to spring into action.

The FA Cup on ITV is that shit you’ve been dreading. The toilet is bad at the best of the times, but now is just awful. Unfortunately (for ITV) the FA Cup does not allow the pesky foreigners to enter and, subsequently, they can not get away with favouring one team, at least not explicitly. As such, they need a story to latch on to. Hey, they don’t want, for example, the underdogs to win per se but who could deny little Billy, the ex-plumber (now on a comfortable wage at a top league one side) from getting the goal of his dreams (before handing in a transfer request to earn more money elsewhere)?

Sometimes a story comes along quite easily – recently sacked manager faces old employers, team of part timers travel to league champions, idiot manager signs stranger on internet who scores with collar up. Sometimes, they have to be crow barred in so jarringly that all is missing is a car door flying through the coverage from some flaming wreckage and Phil Redmond’s name in the opening credits. Take this Saturday for example. Oldham play Everton and it is your bog average FA Cup ‘top division side plays a slightly rubbish side’ tie. Not much more else to it all. Except, wait! Oldham have sacked their manager since their last FA Cup exit and, yes! Yes! He’s in the studio! Tonight! The actual Paul Dickov (although, on looks alone, he may have actually been Alvin the Chipmunk at a Mad Men convention). ITV’s story here wasn’t exactly clear. All they had managed to do was acquire a man deemed not good enough to manage Oldham to come in and talk about what he would do if he had actually been good enough to manage Oldham. Which he hadn’t been. Throughout the match we were treated to bizarre, lingering shots of Dickov watching on, like a jilted fiancée trawling through pictures of his ex on Facebook. The introduction of emotional music at any one of these junctures, and you could have been mistaken for thinking you were watching a bedside vigil from a scene in Home & Away as a guilty hit and run driver looks on at his hapless comatose victim.

When it didn’t seem like the Dickov angle would yield anything, the focus switched briefly to Oldham’s talismanic (hey, he was really tall!) forward Matt Smith. Matt Smith who had, as Clive Tyldesley boomed, heroically managed to lift himself from the depths of the dreaded Conference to the dizzy heights of League 1 in just, get this, two years! Luckily for ITV this story had a happy ending as Smith rose to nod home a late equaliser in what was actually a dreadfully boring game.

But the actual entertainment and quality of the match didn’t matter; ITV had given you a story. The dubious nature of the two goals scored by the story’s good guys didn’t matter either, as Head of Elite Development Gareth Southgate informed us – the rules are just that bit different in the FA Cup. (Keep a keen eye on Gareth at some point screaming that all ‘we’ want from referees is ‘consistency across the board’). A story is a story, and no matter how shite or irrelevant the beginning and middle had been, ITV had given you the end you didn’t necessarily want. And definitely didn’t need.

Now isn’t that a lot better than just watching some football?