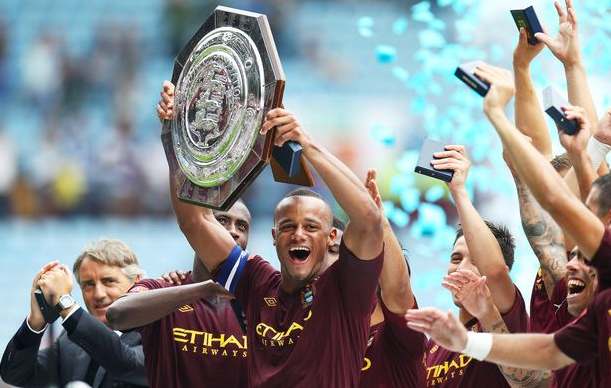 A slightly longer answer: yes, but complacency, the terrible yet terrific two (Tevez and Balotelli) and the inconsistency of Samir Nasri and Edin Dzeko are going to be defining factors in the forthcoming season. After a disappointing start to their pre-season which saw City lose 1-0 to Al-Hilal and draw 0-0 with Dynamo Dresden, they turned it round with three successive and impressive wins against Besiktas, Arsenal and Malaysia. July was over and the Community Shield was final less than two weeks away, the league champions completed their warm up with 2-0 and 4-0 wins over Wolfsburg and Limerick respectively. With the pre-season complete, a confident performance saw Man City beat a 10-man Chelsea in the Community Shield final last Sunday, and now they look to take next season by storm.

The Community Shield, that’s one trophy in the bag. What next? Well the next possible trophy is the Carling Cup, but last season, despite fielding fairly strong teams in each round and getting to the semi-final, they were largely disappointing. They narrowly defeated a young Arsenal side whilst City themselves fielded the likes of Agüero and Nasri who are regular first teamers. They then lost in the semi-final to a below-par Liverpool side. Obviously the Carling Cup isn’t important but avoiding complacency is.

As fantastic as their team is, there is still room for improvement. It could be argued that new signings aren’t necessary for City to grow and progress as a team, simply because of the sheer quality of their current squad, but Mr Mancini would beg to differ. I think a change of mind set should be made the main priority, not a new star signing.

Although, signing a model pro like they did with Pizarro last season could do them a world of good. Jack Rodwell aside, there have been no fresh (first team) faces joining since the short-term loan singing of the David Pizarro in January – but that could all change with the transfer window still open.  The complacency still lies in the minds of these egotistic league winners, and Mancini has a tough job ahead keeping their feet on the ground.

However, the Italian has he’s proved he’s more than capable, handling the likes of Tevez and Balotelli very well in the last six months. The bottom line is, the complacency needs to be handled, which I believe Mancini is capable of. But should he fail to eradicate the problem, then, as has already been mentioned, Mancini should reconsider the signing of a Pizarro-like player. Professional and affordable.

The terrible yet terrific two

Or Carlos Tevez and Mario Balotelli as they’re better known. Tevez is an invaluable asset to Mancini’s men, as is Balotelli. The 20-year-old Italian notched up 13 league goals last season including that vital last minute spot-kick against Tottenham Hotspur which arguably kick-started the two horse race between City and United.

Tevez on the other hand wasn’t as involved last season due to disciplinary issues with the club. However, the Argentine played a vital role in City’s end of league run in (the last seven games), scoring five goals and racking up two assists in that period. A reminder of what the former captain is capable of. In the upcoming season, both Balotelli and Tevez will be vital to Man City.

With Dzeko not living up to expectations (even though he scored one more than Balotelli in the league last season) it seems the pair are entering a battle with one another to lead the line for City alongside Sergio Agüero. Whoever Mancini picks (providing it isn’t Dzeko) should make a lethal partnership with Kun Agüero, presuming they line up in their typical 4-4-1-1 formation with Agüero behind the main striker (or vice-versa). It seems the most likely, and effective, attacking combination [1-1] next season for City will be Tevez behind Agüero. The pair, both representing Argentina at international level, have a very good understanding of each other on the pitch. Agüero is better when further up the pitch, leading the line, and Tevez has the work rate and the raw talent to link play from midfield to the front line.

“I’m very happy because this year Carlos has worked very well in pre-season and his form is better” – Mancini said this the day after City’s Community Shield victory, it seems as Tevez will be in the Italian’s plans this season.

Nasri has declined significantly as a player since his arrive at The Etihad, this is mainly down to David Silva being twice the player of him and playing in Nasri’s preferred role. That being said, he has still managed to be a regular figure in Mancini’s side – and that doesn’t look like changing.

Edin Dzeko has a similar story; he hasn’t lived up to all the journalists waxing lyrical about him before his move to Eastlands in 2011. Unlike Nasri, he was played in his preferred position last season and managed – by one goal – to be City’s second top scorer, yet he still didn’t impress. And with the return of Tevez, the Bosnian looks set to fade into the background for City. But that needn’t be a problem for Mancini as it once again highlights the defending Champions’ strength in depth.

To sum up, Nasri and Dzeko are the two most inconsistent regulars and are bettered by others in the side, and to be quite frank City can do a lot better. Nevertheless, the pair could walk into the first teams of nearly every side in the league. They have an interesting season ahead.

Manchester City will win the league as a team. Last season they were a squad of extremely talented players. But now they’re looking more and more like a football team. They already play good football, and if the pre-season/Community Shield is anything to go by, the players all seem to be on the same level.Obviously there are still complacency issues to sort out, and at times the big egos of players like Balotelli will get in the way, but many people remain confident they’ll defend their title.

Tevez has a huge part to play in City’s title defence, as does the ever improving Joe Hart. Kompany has been doing a sensational job as captain, much better than Tevez ever did. I think these three – as a spine – will be City’s key to victory next season. Yaya Touré and David Silva are the two best midfielders in the Premier League and with these two working the midfield, City can expect some more silverware next season.

I’ll leave you with this controversial quote from Roberto Mancini:

I think United start as the favourite team this year, said Mancini. We are maybe second, third or fourth position.

Roberto and his mind games, eh!

I think City start as favourites. They can do it.

4 thoughts on “Is there a silver season ahead for Man City?”