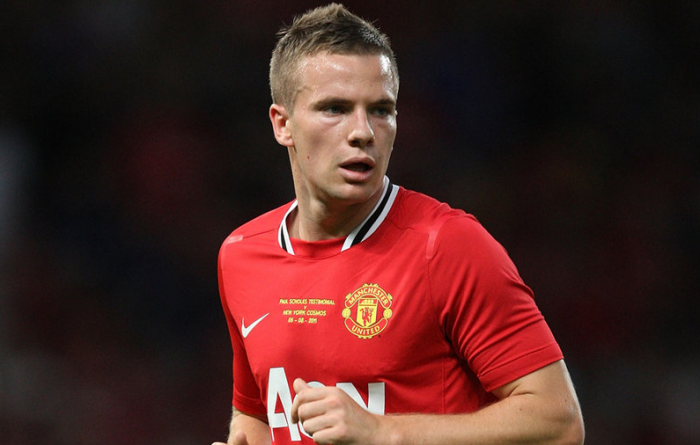 Tom Cleverley’s performance against Ajax on Thursday highlighted the confusion surrounding his Manchester United future. In what was largely a bright performance that encouraged some vibrant attacking play in the first half, Ferguson felt it necessary to sacrifice Cleverley after an hour to shore up an increasingly porous midfield. Cleverley’s attacking qualities are evident but this seems to be at the expense of the team’s defensive solidity.

Clearly the player described by former United youth coach Eric Harrison as “the best young player since Giggs, Scholes & Beckham” has a bright future. He was credited as the reason for the club’s victory in the Community Shield, in which they came from 2 goals down to win 3-2 following the midfielder’s half-time introduction, and subsequently started the first 4 games of the season before going off injured after 8 minutes against Bolton. To date he has played in 7 domestic games for United, including Manchester City, Arsenal and Everton, and has been on the winning side every time.

Since getting injured, Sir Alex Ferguson has struggled to find the necessary balance in the centre of midfield to inspire the fluid attacking play from earlier in the season. Attempts to solve the problem have seen Wayne Rooney and Phil Jones moved from their familiar positions and Paul Scholes called out of retirement. In Cleverley’s absence, his stock has risen at an improbable rate.

But Cleverley himself poses United a dilemma. While Roberto Martinez at Wigan and Stuart Pearce with the England Under-21s preferred to use him out wide, Ferguson has identified him as a central midfielder  capable of setting the team’s tempo and providing movement and creativity. Within a 4-4-2, or variation of, Cleverley performs this role alongside a solitary midfield partner who, at times this season, has found himself horribly exposed by Cleverley’s attacking intent.

One of the features of United at the start of the season, with Cleverley at the heart of the team, was the number of shots they were conceding. Michael Cox discussed this in an article for Zonal Marking, and considered the lack of a midfield screen as a possible cause. Ferguson has paired Cleverley with Anderson and Darren Fletcher in the league, both energetic players but neither of whom is good enough positionally to effectively shield the defence. As Michael points out, the player most suited to this role is Michael Carrick.

Carrick seems to have been the main beneficiary of Cleverley’s injury, having regained his place in the side as well as his form, and his introduction to the midfield has helped United become much stronger defensively. However, Ferguson’s apparent preference to partner Cleverley with a more energetic player (Ji-Sung Park featured in the second leg against Ajax) may suggest he feels the gaps Cleverley leaves in the team can only be plugged by a player with a high work-rate.

Carrick and Cleverley were selected together against Ajax in the first leg and played well, although the opposition were nowhere near as threatening at home as they were at Old Trafford. Whether Carrick and Cleverley can be as effective against stronger opposition remains to be seen, as there seems a possibility that while one moves forward and the other looks to stay back, United will be left with a void in the middle of the pitch.

Ultimately United’s dilemma lies in their formation. Ferguson has always favoured width, and with Nani, Ashley Young and Antonio Valencia in the squad it is unlikely he will move away from playing wingers anytime soon. This means that he can either play a variation of 4-4-2, or select a 3-man midfield and a lone striker. A player like Cleverley would be much more suited to a 3-man midfield where he would have the freedom to attack in the knowledge that there were players to cover him. In a 4-4-2 he would either be required to play a more disciplined role in the middle or play further forward as a second-striker.

The problem here is Wayne Rooney, United’s talisman and star player. Rooney plays as the second-striker in Ferguson’s preferred system, and even if Cleverley were to reach a level where he could challenge Rooney for his position, a more advanced role may not really be suitable. If Ferguson attempted to switch to a 4-3-3 to accommodate Cleverley, Rooney would be forced to play the lone striker role that he has repeatedly spoken out against, despite performing well there in the past (most notably during the 2009/2010 season). Also, United’s other forwards, and particularly Dimitar Berbatov and Javier Hernandez, are far less suited to a lone striker role.

Some people make the comparison between Cleverley and a young Scholes, and would likely argue that Scholes was extremely successful within the same system as United play at present. However the comparison is flawed, as they are slightly different in their movement with the ball. Scholes would look to stay in the centre of the pitch, moving the ball from flank to flank and making runs into the opponent’s penalty area. In contrast Cleverley is constantly moving wide, occasionally swapping positions with the wingers, and thus leaves more holes in the middle of the pitch. It is also worth noting that Scholes played in an era when far fewer opponents played with a 3-man midfield and that he had a world class defensive partner in Roy Keane.

There is no suggestion that Ferguson is close to changing formation to accommodate a player that has only played 9 times for the club, but after United’s pursuit of Wesley Sneijder and Samir Nasri in the summer it is possible that it has come under consideration. Both Sneijder and Nasri are even less suited to a central midfield role than Cleverley and would surely require a more advanced role.

Cleverley has shown enough quality in his brief Manchester United career to suggest that he will play a major part in the club’s progress for years to come. However, it will be interesting to see whether he adapts his game for the benefit of the team, or whether United decide they have a player worth changing for.