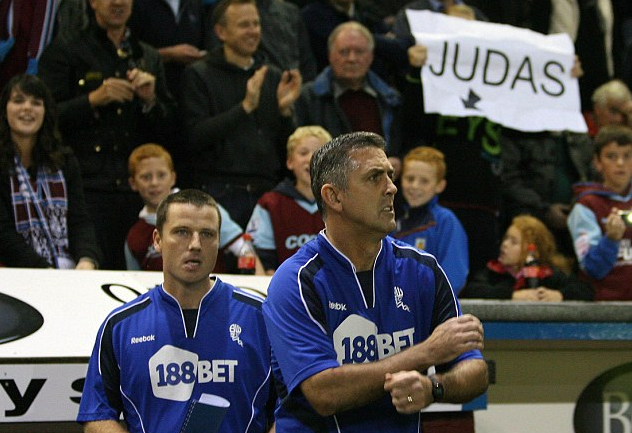 Since the departures of Steve Kean and Eddie Howe from Blackburn Rovers and Burnley respectively, the arch-rivals have been taking their time in appointing their manager. For both, this is an obviously important step and there have been plenty of suitors speculated about but would either side be brave enough to appoint Owen Coyle?

There are some candidates for both jobs, with Ian Holloway being the bookies’ favourite for both, understandable considering his continued success creating an aesthetically pleasing and entertaining Blackpool.

Both sides are an attractive opportunity for many. Blackburn have, aside from Junior Hoilett to Queens Park Rangers, retained many of their key players including Paul Robinson and Grant Hanley, whilst added experienced midfielders Danny Murphy and Dickson Etuhu as-well as young starlet Jordan Rhodes upfront, who has already scored a dozen this term. The new Burnley boss would acknowledge the power of Turf Moor to be an intimidating fortress and would possess Britain’s most prolific striker of the moment, 17 goals in 14 appearances, Charlie Austin, (though if he continues scoring in this vein could find resisting the Premiership in January rather tricky).

Blackburn’s owners, Venkys, are more likely to flex their financial muscle in their pursuit for a new appointment, with Manchester United legends Ole Gunnar Solskjaer and (allegedly Turkey-bound) Roy Keane both touted for the job.  Harry Redknapp has also been linked. As Steve Kean was, arguably harshly, so viciously derided at Ewood Park, the owners will be eager to hire someone popular with the crowd. Consequently, playing heroes of the past have been targeted. Paul Dickov, of Oldham Athletic, and Garry Flitcroft, of Chorley, may find the step-up to Rovers one too high, whilst Billy McKinlay would have to take the jump from being assistant manager of Fulham.  Tim Sherwood seems too comfy in the stands at Spurs, whilst the attempt to lure Alan Shearer away from his high-paid studio job, masquerading as a pundit when really he is just copying what the other analyst has said but in an even less articulate manner,  is far too ambitious.

Burnley are keen to find someone in the mould of Howe, whose surprise retreat to Bournemouth for personal reasons was a shock. The Clarets want someone young, fresh and affordable, with Sean Dyche, Steve Davis, Michael Appleton and Keith Hill all realistic contenders. The phrases ‘sexy football’ and ‘Mick McCarthy’ are never likely to feature in a sentence but he would be a wise appointment considering that Burnley are conceding just as many as Austin is scoring.

Or both could be brave and controversial and appoint recently sacked Owen Coyle. Arguably, Coyle was unlucky to be sacked by Bolton Wanderers, who like plenty of teams before them, (Leeds United, Manchester City, Sheffield Wednesday, Charlton Athletic) have struggled to adapt to the Championship via relegation.

Enthusiastic and keen on entertaining football, Coyle had created an attacking Bolton side, with youngsters such as Chris Eagles, Mark Davies and most notably, Gary Cahill, thriving alongside dependable influences, Kevin Davies and Martin Petrov. His Bolton side fell apart, causing their relegation, through the departures of Cahill to Chelsea and the retired Fabrice Muamba, whose cardiac arrest would have had a psychological impact on his team. Coyle is also clever at using the loan system, recently with Jay Spearing and Stephen Warnock from Liverpool and Aston Villa respectively, and most successfully with Jack Wilshere from Arsenal.

For Blackburn, Coyle’s capture would be the biggest insult to their neighbours. If Blackburn were to enjoy any success it would be hard to bear for Clarets fans but even more painful knowing that the Scot was a contributing factor. He also has the recent experience to cope with players used to Premiership level, such as Robinson and Murphy, and almost brought Bolton FA Cup success, until they were thrashed 5-0 in the semis by Stoke City. Prospects, such as Rhodes and Ruben Rochina, could enjoy someone who trusts youngsters in the first team.

For Burnley, it would be an almost improbable u-turn, from Jesus to Judas and back to Jesus. This is a very rare move and has obvious limitations, a confused crowd being one thing and there would be a need to rebuild relationships. Harry Redknapp did guide Portsmouth to the FA Cup despite previously leaving them for Southampton, so it has been done before. But, Coyle is the only manager who has guided Burnley to the Premiership and since their relegation, caused only by his departure (proving the great effect he had on the team), they have never threatened to return. He has the know-how to guide Burnley to promotion.

For both sides, Coyle is unlikely to be appointed but it is undoubted that he would be an interesting appointment who would provoke some form of reaction from players and fans, a reaction that could become a catalyse for promotion.

2 thoughts on “Is either East-Lancashire side brave enough to appoint Coyle?”