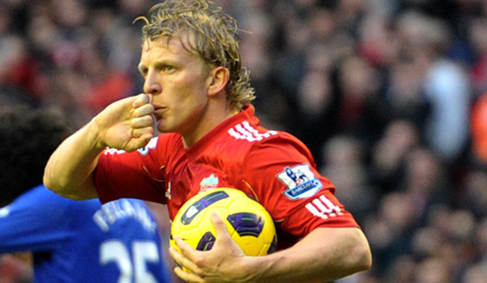 Take your minds back to Saturday 6th March 2011. A lunchtime kick off at Anfield between bitter rivals Manchester United and Liverpool saw the Merseyside team run out 3-1 winners thanks to a hat trick from striker Dirk Kuyt. This was Kuyt’s first hat trick for the club and came at a time when goals were flying in for the Dutchman. Kuyt’s good run of form last season saw him score 15 goals for the club, equalling his best total of goals for the club in a season.

Kuyt is now currently in his sixth season of being a Liverpool player and under the reign of Kenny Dalglish, the striker has become a regular on the substitutes bench this season. With the arrival of new strikers Luis Suarez and Andy Carroll, as well as the return of Welshman Craig Bellamy, Kuyt has not played as much as he will have want to. The Dutchman has not been helped either with the arrival of Jordan Henderson who has been played on the right side of midfield, a position Kuyt has occupied for much of his Liverpool career.

Kuyt has only scored one goal this season, in the Carling Cup match away at Brighton. With the team currently struggling to find the net, Kuyt’s lack of goals has not helped. It has been seen in the past that Kuyt’s goals have been valuable to the team on many occasions. His run of goals at the end of the 2010/11 season helped Liverpool to a strong finish to a disappointing campaign. He may not be a 20 goal-a-season striker, but fans of Liverpool will tell you his goals have had important significance.

But currently, Kuyt is not finishing chances that a year ago he was putting away with ease. One of the most recent games at home to Stoke, Kuyt was standing six yards out from goal. Jose Enrique’s cross fell to Kuyt who somehow managed to head horribly wide with the goal at his mercy. Any Liverpool fan would expect him to finish that sort of chance, especially considering Kuyt scores a lot of his goals in the six yard box.

It now comes to the time where fans are looking at Kuyt now and thinking his time may have come to leave the club and start afresh elsewhere. With £35million man Andy Carroll more likely to start ahead of him, Kuyt has to fight with Bellamy and Suarez for the other front position. Dalglish may go in for another centre forward in the summer and Kuyt would be the player to make way if this was the case. There have already been rumours during the transfer window of possible suitors for the Dutchman so this may be the last season we see Kuyt in the Premier League.

With the club so close to a cup final and a chance for silverware, Kuyt will be sure to work hard and fight for his place in the team. With goalscoring an issue at the moment for Liverpool, Kuyt needs to take any chance he gets to play and to start scoring otherwise it will be more likely he will be shown the door.

2 thoughts on “Is Dirk Kuyt’s time up in Liverpool?”