Perth Glory today announced that striker Andy Keogh has signed on with the club for a second time after an unsuccessful stint in Thailand.

The 29-year-old, who has 30 Republic of Ireland caps to his name, left the West Australians at the end of last season having been at the centre of a salary cap scandal that saw the club kicked out of the A-League Finals. 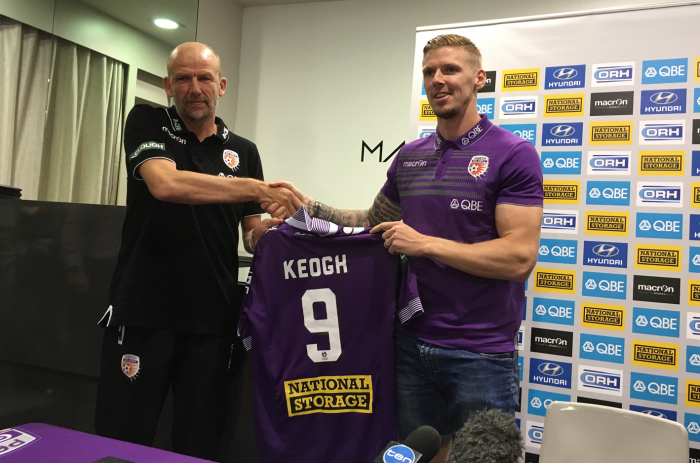 Despite signing on until 2018, Keogh may not be able to take the field until the start of the 2016/17 season as Glory already have the maximum amount of foreign players (five) in their squad.

One of those would either need to leave or be placed on the long term injury list by the close of the transfer window at the beginning of February after Football Federation Australia (FFA) denied a request to allow Keogh join as a ‘Guest’ player.

I’m committed to helping Perth Glory become a powerhouse in the A-League and pledge to do my best to see it return to its glory days.

Club CEO Peter Filopoulos stressed that Glory were keen to get Keogh, who netted 12 times in 27 A-League games last season, on board irrespective of the uncertainty over when he can play due to interest from other A-League clubs.

“We’re consolidating our position from last season, and we’re rebuilding the club block by block,” he said.

“It’s going to take some time, and obviously this is the first of many announcements we would like to make over the coming months.”

First team coach Kenny Lowe believes that tying Keogh down to a deal for 206/17 and 2017/18 was a no brainer, and is of the opinion that the number 9 can be an influence around the club even if he can’t play competitively.

“When he first arrived he brought something into the club, he changed the training regime of certain players because of the way he went about his business,” said Lowe.

“They actually looked at what he did and went ‘wow, I want a bit of that’, and some of those players have benefitted from that. He brings a winning mentality into our workplace.”

Keogh’s spell at Thai side Ratchaburi lasted only a matter of months, and the Dublin native admitted that it wasn’t the experience he expected.

“Going to Thailand was a good opportunity for me to get some security for my family and myself after the season that we had,” he said.

“I didn’t enjoy it as much as I thought I would and it didn’t meet what I expected of football so I took the decision to step away from a good contract to come back to Perth where my family are.”

Glory have endured a poor start to the season and sit bottom of the A-League with just one win and four points from their eight games so far.

They have also struggled badly for goals, scoring just once in the last five games, and would no doubt be happy to get Keogh on the park at some point during the current campaign.