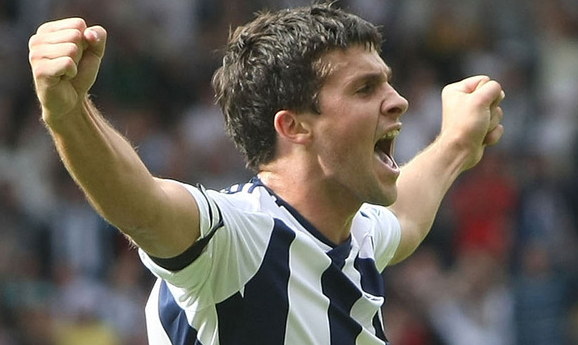 However there was some good news from an Irish perspective with ex-UCD midfielder Paul Corry playing the majority of the match for Wednesday, only leaving the field with seven minutes remaining to be replaced by late substitute Danny Mayor.

Corry’s opportunity to make his home debut in central midfield came about after Rhys McCabe was ruled out with a thigh injury.

Republic of Ireland Under 21 player Aidy White was again in Neil Warnock’s side as was ever-present goalkeeper Paddy Kenny.  Paul Green’s return from injury continued on the substitutes bench for the second game in a row, having not featured for Leeds since the seasons opening day.

Fulham continued their decent run of form with a home win over Paul Lambert’s Aston Villa at Craven cottage thanks to a late Chris Baird winner.

There was no Damien Duff or Stephen Kelly for Fulham but Stephen Ireland made a return from injury for Aston Villa to play three quarters of the match before being replaced by Charles N’Zogbia.  Richard Dunne and Ciaran Clark were missing from the Villa defence through long-term injury and suspension respectively.

Shay Given’s presence on the Villa bench is now an apparently long term fixture and a move away from Villa park could be required if he wishes to regain first team football.

Brendan Rodger’s will be relieved to have won his first league match with Liverpool at Anfield.  The visitors, Reading, is where Irish interest lay.  Alex Pearce will be hoping his season hasn’t peaked too early with a run of first team performances resulting in his debut for Ireland.  But after scoring in the Oman victory, Pearce has slipped down the pecking order and has begun to look a familiar face on the bench for Brian McDermott’s side.

Noel Hunt will have been disappointed to miss out through injury after two goals in his last two league games for the club.  Former Irish Under 21 international Jay Tabb was replaced in the Reading line up by Mikele Leigertwood who returned from injury.  Unfortunately for Ian Harte, despite his contribution to Reading’s promotion and his early season appearances, he has for now lost his place to Nicky Shorey.

Marc Wilson finally made his competitive debut for Ireland on Tuesday night, scoring in the 4-1 victory over the Faroe Islands.  And such was the competence and ease with which he fulfilled the left back role HaHHit is rather difficult to see how he won’t remain there ahead of Stephen Ward.  Wilson started, as is the norm, for Stoke in their 4-2 reversal at Old Trafford and was joined in the starting line up by Jonathon Walters, who also contributed to the Irish victory in Torshavn.  The injury that saw Glen Whelan miss the Irish qualifiers continues to keep him out of the Stoke side.

It was James McCarthy’s assist in an unorthodox goal by Emmerson Boyce that gave Wigan some hope in their away game to Swansea.  However Michael Laudrup’s side held out for a 2-1 victory.  McCarthy, Ireland’s man of the match against the Faroese, is an ever present in the Wigan midfield and as he grows into the role at international level, that could also prove to be the case at international level.

Irish Under 21 midfielder Rob Kiernan is due to return to Wigan next Sunday after his loan move to Burton Albion ends.

Shane Long must struggle to understand why Giovanni Trapattoni won’t start him competitively for Ireland.  It’s a struggle he shares with many; but there’s not much more he can do then to continue in this same vein of robust performances, typified again in Saturdays defeat to Manchester City.

James Milner sacrificed his place on the pitch when Long was through on goal, bringing him down to earn a straight red card.  Long went on to give the home side a 67th minute lead, only for Edin Dzeko to score twice in the final ten minutes to secure victory for the visitors.

Steven Reid has yet to recover from a hamstring injury and did not feature for the Baggies.

Despite positive news on his hamstring injury, Joey O’Brien did not feature in West Ham’s comfortable 4-1 victory at home to Southampton.  Twenty-four year old Dubliner Stephen Henderson, joined Championship side Ipswich Town on a three-month loan deal on Tuesday of last week and made his debut in Saturdays defeat at Hull City.

Damien Delaney headed in Crystal Palace’s second goal in this London derby, that the home side will have felt they should have won, but ultimately settled for a draw.  Owen Garvan also started in what might be Dougie Freedman’s final match in charge if his switch to Bolton Wanderers materialises.

Keith Fahey was a late substitute for Birmingham City in their 1-1 draw with Leicester City.  Cork man Colin Doyle was the home sides reserve goalkeeper.  Stephen Carr is out until the new year with a knee injury.

Sean St Ledger remains unavailable with the same injury that kept him out of Ireland’s world cup qualifiers and similar to their opponents, Leicester City’s goalkeeper was also Irish; Donegal man Conrad Logan.

Caretaker manger Jimmy Phillips saw struggling Bolton garner a much-needed three points in their home win over Bristol City.  However Keith Andrews will be disappointed to have only been an unused substitute.

Gary Dicker was also an unused substitute, this time for Brighton in their 1-0 home defeat to Middlesborough.

Twenty six year old Dublin midfielder Stephen Dawson continues to impress in the Barnsley  midfield and put in another tidy performance in a 1-0 away victory over Charlton, which sees them climb to seventeenth position.

Former Irish Under 21 defender Richard Keogh and Dubliners Jeffrey Hendrick and Conor Sammon all started for Derby county in their 1-1 draw with Blackburn.  The impressive Irish contingent didn’t end there with nineteen year old  and former Cherry Orchard defender Mark O’Brien on the bench alongside back up ‘keeper Saul Deeney.  The twenty nine year old Derry man has two caps for the Irish Under 21s from 2005.

The 2-1 victory for Huddersfield over Wolves saw the involvement of Anthony Gerrard for the home side.  The two other Irish players at the McAlpine stadium, Sean Scannell and Alan Lee, were both unused substitutes.

The visitors had Steven Ward, Kevin Doyle and Kevin Foley all in the fold; Doyle returning after the injury that forced him to miss out on linking up with the Irish squad last week.  Stephen Hunt remains on the long-term injury list.

Hull’s decent start to the season continued with a good 2-1 victory over Ipswich Town.  After spending much of the early season on the bench, Paul McShane returned to the Hull defence.  Clondalkin man Stephen Quinn also started.

The afore mentioned Stephen Henderson made his Ipswich debut, while Daryl Murpy, himself on loan from Celtic, started again up front for the visitors.

Mark Yeates was a very late substitute for Watford in their 1-0 victory over Peterborough.  Under 21 midfielder Sean Murray didn’t get the same opportunity to appear from the bench.  However there was a start for Under 19 centre back Tommie Hoban who has been recently lauded by manager Gianfranco Zola.  Kane Ferdinand started for the struggling visitors.

Christopher McCann, the Dublin born captain of Burnley led his side to a 1-0 victory over Blackpool.  Keith Treacy’s dip in form has cost him his place with only one league appearance this season.

Celtic look in rude health going into this week’s meeting with Barcelona after a comprehensive 5-0 victory over St. Mirren.  However it will have been an afternoon to forget for Dubliner David Van Zanten and St. Mirren’s Waterford captain Jim Goodwin.

Dundee United’s struggles continued, as they could only manage a 1-1 draw at home to Aberdeen.  There was a strong Irish presence in the Dundee line up with Seán Dillon, Gavin Gunning, Willo Flood and Jon Daly all starting; Richie Ryan was a second half substitute.

Oughterard centre back Joe Shaughnessy was an unused substitute for Aberdeen but Dubliner Jonny Hayes did make a second half appearance from the bench.

Ross County’s first home win of the season came at the expense of Pat Fenlon’s Hibernian side that went down 3-2 at Victoria Park.  Twenty Four year old Dubliner Eoin Doyle started up front for Fenlon’s side.  Irish veteran Alan Maybury, who started his career with Home Farm before a Leeds move that brought him to prominence, started at full back.

Cillian Sheridan started up front for  Kilmarnock but could not get on the score sheet and prevent a defeat with a last minute goal, however earlier in the game he had come close for the visitors when his shot struck the St. Johnstone post.  Wicklow striker Paul Heffernan was a second half replacement.

John O’Shea and James McClean were part of the Sunderland team that looked to have lost all three points at home in their North-East derby clash with Newcastle, before a late Demba Ba own goal secured a point.

McClean looked rusty at times following his recent injury but did improve in the second half.  Keiren Westwood continues to deputise to Simon Mignolet, while David Meyler was an unused substitute.

In the second premier league match of the afternoon Everton and QPR played out a 1-1 draw; Seamus Coleman starting again for David Moyes side with Shane Duffy on the bench as cover for centre backs Sylvain Distin and Phil Jagielka.  Darron Gibson remains out through injury.

Hearts full back Danny Grainger mustered enough time and space to score with a 30-yard effort and beat Bray’s Darren Randolph in the Motherwell goal to secure a 1-0 home victory.  The victory sees Hearts move to eight place, a point and two places behind Motherwell.

Aiden McGeady looks set to miss out on Spartak Moscow’s home Champions League clash with Benfica this week.  His loss through a foot injury, which will keep him sidelined for at least a fortnight, will be a large loss to the Russian side who must defeat their Portuguese opponents to have any chance of qualifying to the knock out stages.  McGeady picked up the injury in Ireland’s victory over the Faroe Islands.