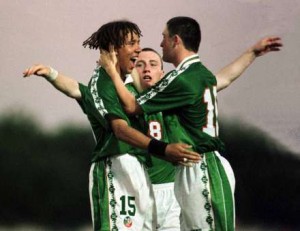 The late 90’s were an exciting period for youth football in Ireland. Despite  the senior squad watching France 98 from their living rooms, European success for the U16 squad was swiftly followed by the U18’s making history, clinching the UEFA U18’s European Championships in Cyprus, Ireland’s first and, to date, only successes on the international stage.

Brian Kerr’s men celebrated following a 4-3 victory on penalties against Germany,  but  for some, that night in Nicosia would be the most fruitful of their careers, such are the contrasting fortunes of the modern footballer. Robbie Keane may have progressed onto some of football’s most exhilarating landscapes with London, Milan, LA and erm, Coventry under his belt, but how have the rest of Ireland’s once-young hopefuls fared? Here are the Ireland U18 starting eleven from that night.

The London-born shot stopper saved two penalties in the deciding penalty shoot-out to help hand Ireland the championship, but failed to raise any eye-brows at West Ham, before having spells at Bristol Rovers and Northampton Town. Following a career of sporadic appearances at clubs across the non-league universe, O’Reilly’s last previous club was Thurrock of the Conference South. Perhaps O’Reilly’s most notable post-98 highlight was with Harchester United of Sky One’s Dream Team, playing the role of the team’s ‘keeper Alex O’Mare. A claim to fame if there ever was one.

Heary broke through the youth ranks at Huddersfield Town and worked the backline in the lower-echelons of English football until 2003, before heading back to Ireland to turn out for Bohemians, alongside his brother and current club captain, Owen. He has since had stints at Galway United and his last club, Limerick.

Keith Doyle was the sole member of the 1998 European Championships-winning squad to spend his entire playing career in Ireland, notably a steady, if uneventful, number of years at Shamrock Rovers, before leaving the game in 2006.

Although it’s hard to imagine the increasingly weather-beaten Richard Dunne as a fresh-faced teen celebrating success for Ireland’s U18’s, Dunne, alongside Robbie Keane, is the only star of 1998 to go on and establish himself as a respected and constant force in the Premier League with Everton, Manchester City and Aston Villa.

In the past five years, Dunne has established himself as Ireland’s finest defender, exemplified recently by his herculean performance in the 0-0 draw away to Russia, which Irish legend Paul McGrath described as the best Irish centre back performance he had ever seen. Even if his squad number was drawn on his back with a biro borrowed from a nearby bookies.

Gavin spent seven years on Middlesbrough’s books, for the most part out on loan to an array of lower league clubs, before he headed home for shifts at Shamrock Rovers, Drogheda United and St. Patrick’s Athletic. Now 31, Gavin is enjoying a spell at Stirling Lions in the second tier of Australian football.

Once christened ‘the new Liam Brady’ by George Graham, McPhail was part of the exciting young Leeds team of the late 90’s, before embarking on a career in the chaotic world of the Championship. After periods at Nottingham Forest and Barnsley, he was snapped up by Cardiff City in 2006, captaining the side that lost to Portsmouth in the 2008 FA Cup Final. McPhail was diagnosed with lymphoma in late 2009, but defied the odds and returned for Cardiff, incredibly just three months after doctors gave him the all clear. Since the 1998 triumph, McPhail has gone on to make ten appearance for the senior national side, earning himself a recall to the first squad for friendly ties against Serbia and Colombia in May 2008 after a six year exile.

The Belfast-born midfielder was seen as a future starlet of Irish football and his then-club Celtic, earning a call up to Mick McCarthy’s senior side shortly following his success at U18 level. Despite initial promise, a career of obscurity was to follow; Crossley was last plying his trade in the Northern Ireland league.

Quinn would go on to make five appearances for the senior Irish side following U18 success in Cyprus, selected whilst turning out for Coventry City, where he made his debut in a 2-0 to defeat at Manchester United. Following his release, Quinn made 193 appearances for Oxford United in the basement of League 2 and the Conference, before being released in 2009.

Richie Partridge spent five years on the books at Liverpool, but failed to make a single appearance, but became Michael Owen’s brother-in-law along the way. Yet another of the 1998 wunderkids-turned-lower league journey men, Patridge enjoyed his best football at Chester City, picking up a reputation as a lively winger with an eye for goal in League Two. After a stint in Wales with The New Saints, Partridge called it a day due to persistent knee injuries in 2011, and is now a physiotherapist at Liverpool.

The man on this list who needs the least introduction, Robbie Keane is undoubtedly the standout name of Ireland’s 1998 European conquest. Having already earned a first team cap (against the Czech Republic in March 2008) before the success in Cyprus, Keane’s flourishing international career was set, and with 51 goals in 111 appearances, Robbie is Ireland’s all time leading scorer, 30 ahead of second placed Niall Quinn.

The man who converted the winning penalty to seal victory in the 1998 shoot-out burst onto the scene at Luton Town as a promising forward in the last 90’s/early 00’s, but has since been the definition of a journey man, with just shy of 20 clubs on his footballing CV. A brief stint in the North American Soccer League with the Atlanta Silverbacks preceded a return to the pitiless surroundings of English non-league football, last signing for Barton Rovers in 2010. 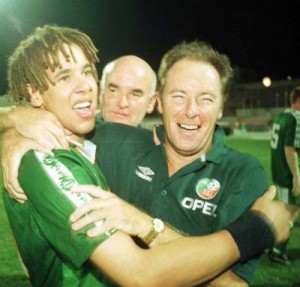 Following Kerr’s success in Ireland’s youth set up, which extended beyond the U16 & U18 successes in 1998 through moderate achievement in the World Youth Championships in 1999 and qualification for the 2003 tournament, there was an air of inevitability that he would one day manage the senior team. His appointment in 2003 was greeted with initial optimism, but things didn’t transpire the way they perhaps should of, and Kerr’s contract was not renewed in October 2005, leading the way for Steve Staunton’s reign of ineptitude. In 2009 he was appointed manager of the Faroe Islands, and will lead the tiny nation’s posse of semi pros into qualification for Brazil 2014, where he can potentially come up against former protégés Keane and Dunne, 16 years after it all started.