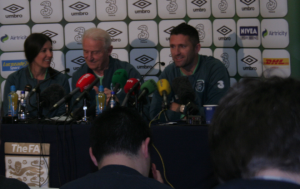 At Tuesday’s eve of England v Republic of Ireland press conference, the ever animated Giovanni Trapattoni said that he had always wanted to manage against England and his good friend Roy Hodgson while captain Robbie Keane said that a game against England at Wembley had been “too long in the making.”

Fresh from an eight hour flight, Keane stated his as ever enthusiasm for international football and that he has “come across players who were not enthusiastic in playing for their country but I can’t understand that.”

It was a press conference which as ever left much to the imagination in terms of what exactly Trapattoni was talking about. The Italian was his animated and bombastic self with the typical hand gestures and references to former great players (Platini, Pelé etc).

The show (it’s always a show with Trapattoni in tow) came to a climax when Trap referenced a “70kg player against a(n) 85kg player” before proceeding to almost knock translator Manuela Spinelli across the room with a shoulder barge.

Irish captain Robbie Keane meanwhile was in fine fettle himself, saying he remembered the last time Ireland played England as he was a 14 year-old in the Lansdowne Road crowd when the 1995 fixture between the two countries was abandoned following rioting by England fans.

Keane is not the only Irish player to have made a long journey for this game with Darren O’Dea having travelled from Toronto to make the game in London while being set to depart for a return flight across the Atlantic on Thursday morning.

It was the captain who was to keep the assembled press corps entertained however when asked what this game would mean to him in terms of career highlights, the 32 year-old stated (with an obvious reference to some England players):

“This is a big game in my career, I might even get to write me own book now!!”

On the pitch, there is no starting place for Stoke’s Marc Wilson who has been ruled out with a hip injury. He’ll be replaced by Reading’s Stephen Kelly who appears to be back in Trapattoni’s good books following their much publicised previous disputes.

Elsewhere there is no major surprises as David Forde continues in goal while John O’Shea and Seán St. Ledger will play in the centre of the defence with Séamus Coleman on the right defensive flank.

Jonathan Walters starts on the right wing with Aiden McGeady opted for ahead of James McClean on the opposite flank with the much sought after James McCarthy partnering Glenn Whelan in central midfield.

Up front Shane Long partners Keane. Whilst the Tallaght man’s commitment to the cause is admirable, one wonders how long he can continue this Atlantic hopping as kick off at Wembley will be less than 36 hours after he arrived in London.