Alan Flood reviews Ireland’s showdown with Wales, ahead of a hugely important week for the Irish national side. 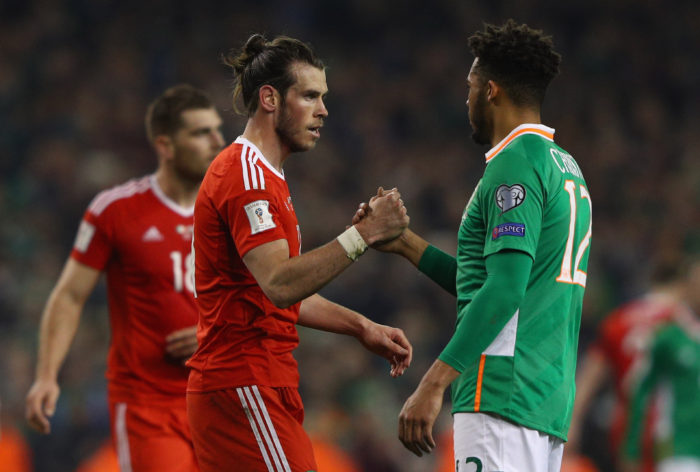 ‘McClean on the run. Here comes James McClean and an opportunity for Ireland… And McClean makes it 1-0!’

Though from where we sit now, it may as well have been a nostalgic piece of commentary, from an historic qualifying campaign, 2001 perhaps, and what is likely to remain Ireland’s sole successful World Cup qualifying attempt, this century.

That is despite the news this week that Gareth Bale is set to miss the probable play-off decider between Wales and the Republic of Ireland in Cardiff on Monday night, news that has been greeted in Ireland with nothing short of elation.

An intervention from the gods surely, up there with Valeri Qazaishvili’s timely winner for Georgia against Scotland toward the twilight of our last qualifying campaign.

This, a similarly unlikely shade of luck flung toward Martin O’Neill’s team at their nadir.

The relief of Irish fans to learn that one of the best players on the planet will be absent from this affair is totally palatable. Bale is vastly superior to any player that will take to the pitch on Monday night and therefore his absence can only be a positive for the Republic of Ireland.

To capitalise on that positive however, Martin O’Neill’s team will need to show an ability to sniff out a goal that was painfully absent against Serbia last month, and has been for much of the calendar year.

A phrase that was repeated again and again following that bitterly disappointing result was that of, ‘it is in our own hands.’ As if this was some new found advantage. It was never more so in ‘our own hands’ than that night in Vienna of course, when Ireland sat on top of Group D, with a two point cushion.

McClean’s goal against Austria was something of an anomaly really. It showcased the kind of clinical finishing that has eluded Ireland since Robbie Keane’s retirement, and has done so particularly in the four qualifiers this year, in which Ireland have earned three points, scoring two goals. Both of which, had decent cases for being disallowed.

It was generally agreed that against Serbia in Dublin, Ireland gave an encouraging first half display. With Wes Hoolahan in the team, we played some good football, stringing together a number of impressive passing moves, though with little in the way of goal scoring opportunities.

Serbia had in their ranks many recognisable, quality players. A combined eleven of Serbia and the Republic of Ireland would be heavily weighted in the Eastern Europeans favour.

In both games against Ireland however, they were neither impressive nor intimidating. In the corresponding fixture in Belgrade last year, the Serbian defence proved themselves to be a chaotic outfit, gifting Ireland an equaliser late in the game.

When Nikola Maksimović was sent off in the second half in Dublin last month, Ireland had nearly a half an hour to find a goal against ten men, and never looked like coming close. Instead, our World Cup hopes staggered in a solemn haze of terrible crossing and repeated pot shots hit from ridiculous positions.

Ireland face Moldova in Dublin this Friday night. The Moldovans sit bottom of Group D with two points, both of which were collected against second bottom Georgia, and have so far conceded twenty goals in eight games of qualifying. So Friday evening presents Ireland with an opportunity to sharpen their goal scoring touch.

If goals continue to elude Martin O’Neill’s team against Moldova, then we can take solace in the fact that we truly don’t deserve to be at the World Cup finals in Russia next summer.

If the goals do flow against the Moldovans, and Wales pick up the three points Ireland failed to get against Georgia in Tblisi, then a play-off decider is perfectly poised with a Baleless Wales on Monday night, Ireland knowing only victory will suffice this time.

With the absence of the Real Madrid star, once again it feels like this Ireland team have been thrown a life line just when they need one most. Yet to capitalise on the absence of Bale, Ireland must show a goal scoring acumen which has been absent so far this year.

If they can do that, they’ll have given themselves an unlikely shot at a play off.

If not, then the absence of Bale is just a red herring.