We recently befriended journalist and author Iain Macintosh on Twitter, who has taken to the social media site like a duck to water. He has written a series of guidebooks to educate you (and your loved ones) on various sports in an easy-to-understand manner – and he’s kindly given us two to give away to our readers.

But first, we had a few words with Iain …

How did the idea for the EYEWTKA series of books come about, and how have they been received by newbie sport fans?

It was my publisher’s idea actually, the wonderful Charlotte Atyeo. She wanted to produce a series of easy-to-read sporting guidebooks for normal people, people who didn’t want to get blinded by science and jargon. Given that I couldn’t write a difficult sentence if my life depended on it, she decided that I was the natural choice to take on the job. Only time will tell if she was right, but the initial feedback is promising. It’s selling quite nicely in Waterstones and on Amazon and, only the other day, I overheard my mum explaining the offside trap to one of her friends. For that conversation alone, I’m glad I wrote them.

The “Football” guide must be on everyone’s (WAGs?) reading list this summer with the World Cup approaching?

I have had a lot of people tell me that they’ve already bought it for their girlfriends, but I’ve also had a few girls tell me that they’ve got it as last-ditch attempt to convince their husbands to follow football, which is fantastic. The books are written in a weird style and it’s not one that’s been tried before. If I took you down the pub and explained, from start to finish, all about football and how it works and why it’s so wonderful and compelling, then this book reads like a verbatim recording of that conversation. It’s very chatty, it’s very silly and it is so simple that it’s unlikely ever to be chosen as a GCSE set text.

You’ve done one on football, rugby, cricket, and golf – which was the most difficult to write?

Funnily enough, it was the football book. I knew a fair bit about the other sports having played them all at one lowly, unimpressive level or another, but football is my over-riding passion. It’s actually a lot more difficult to explain the things that you’ve taken for granted for almost all your life, and it’s practically impossible to do it without filling it with your own personal prejudices about the game. In the end, I gave up wrestling with objectivity and just kept it natural. This is why there are several rants in there about UEFA, FIFA and stupid football fans. Sorry about that.

First Football Fables, and now this series – do you have any more books in the pipeline?

Not so far. I finished the EYEWTKA books three months before I got married and as soon as I’d recovered from that experience, the World Cup suddenly appeared on the horizon. When that finishes I plan to go on holiday and have a good, long think about it. I’m torn at the moment between more football books, some easy-to-read guides to history, a labour of love focusing on Championship/Football Manager or some short stories about a very naughty mouse called Lionel. It’s a tightrope, this book business.

On a personal level you’re working for Singapore’s TNP, how do you find life away from the UK but still writing about its football?

Actually, it’s the other way round. I’m based in London and I divide my time between Stamford Bridge, The Emirates and White Hart Lane, with the occasional trip to Upton Park as well. I’ve been over to Singapore a couple of times for visits, but they have me stationed out here on my own, watching as much football as I can and emailing my articles over. It’s a ludicrous job and I wake up every single morning worrying that someone’s going to suss me out and take it all away. You support Southend, who are slowly but surely making their way up the English leagues. Will they be heading up to the Championship any time soon?

Up the leagues? If bloody only. We’re in the 4th Division after a rollercoaster ride up to the second flight and back down again. We beat Manchester United and gave Chelsea a fright on the way, but it’s all over now. I’m afraid we’re in a lot of trouble. We almost got wound up on about eight occasions last season, we’ve only got a handful of senior players and there’s more money down the back of my sofa than there is in the transfer kitty. These are dark days.

The question that’s on everyone’s lips this summer – who will win the World Cup?

I really don’t know. It’s hard to see beyond Brazil and Spain, but you know what these tournaments are like. It’s the team with the momentum, the good fortune and the odd refereeing decision in their favour who always win. Look at Euro04. That was England’s tournament but, in the space of 120 minutes we had to deal with Rooney’s toe exploding, Sol Campbell’s perfectly legitimate goal being disallowed and the ball, the effing ball, moving off the penalty spot as Beckham went to hit it. The best preparations in the world can’t prevent luck like that. I’ll stick a tenner on Holland, because 14/1 is silly odds for a team who qualified with a 100% record, but that’s more of a punt than any kind of expertise.

What nations would you like to see do well, and who are you hoping don’t?

I’ve always loved an underdog, so I’d be delighted for New Zealand to get at least a point. Who I do hope fails? Well, I’m still bitter about 1986, so I’d enjoy watching Argentina crash out in the group stages. Maybe then I’ll be able to let it all go and learn to love again. That cheating bastard.

There’ll be plenty of quality players on show, who do you think will stand out?

I’m looking forward to the hidden gems more than the established stars. I’ve heard lots about Christian Eriksen of Denmark and people keep telling me about this Nicolas Lodeiro character from Uruguay. Of course, the best ones are the players who appear from nowhere.

You’ve joined the Twitter revolution like many journalists before you, is this the future of football journalism as we know it?

I love Twitter. It enables writers on every rung of the ladder to disseminate their work and watch as it spreads around the world on an entirely meritocratic basis. It doesn’t matter if you’re 14 years old and clattering the words out on your Dad’s laptop. If it’s good, if it’s funny, if it makes people think, there’s more chance than ever before of it being noticed. That’s going to enable a lot of talent to rise up from non-traditional backgrounds and that can only be a good thing. 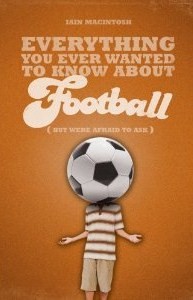 Do you think Twitter and the internet is changing the way we read and watch football – especially this summer?

It’s certainly giving people more options than they used to get from the established media. Websites like your own, like Zonal Marking, like Soccerlens, they’re all able to approach the subject from different angles with different perspectives. It’s also a great medium for passing on the best of the traditional media and it’s interesting to see the journalists who have embraced the new technology flourishing. Oliver Kay, Daniel Taylor, John Cross are all regular Tweeters who reply to sensible messages. None of them are quite in the royal circle of football journalism, but they have seen their profile rise considerably. Others, who haven’t yet figured out that the door swings both ways, have found themselves the subject of satire and scorn.

Thanks Iain! Follow him on Twitter @iainmacintosh, you won’t regret it. You can also buy his book on Amazon.

Iain has given us two issues of his book to give away, to enter email comp@backpagefootball.com with your name, address and the answer to the following question:

Who does Iain support; Southampton, Southend or Northampton?