Ricardo Manuel Pinza Álvarez is Fuenlabrada’s new coach for the women’s Juvenil A team for the season ahead. Ricardo has coached various youth teams around Madrid and Spain – but this is the first time he will be coaching a Juvenil team.

He comes to Fuenlabrada after a year coaching the cadete squad of CD Canillas, an important northern Madrid team. 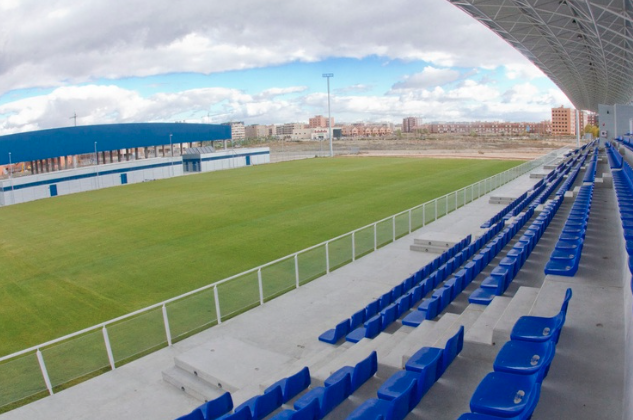 This isn’t his first time coaching a women’s side – he was the senior head coach of Oroquieta Villaverde for the 2015/16 season.

In this interview, I asked him about what got him into football coaching and his journey so far – a journey that started when a friend needed help…

When did you make the decision to pursue football coaching and what motivated you to do so?

I have always liked football, I have practiced it since I was six years old but I had never considered being a coach.

One day a friend told me if I could give him a hand with his team, that he needed someone to help him. I did not think twice and I embarked on the adventure. He had to stop training the team for a month, for work reasons, and I was in charge. Since that time, I have not stopped training and training in different categories – both male and female.

How would you describe the education you took to become a head coach? Do you think it prepared you for the challenges ahead?

In addition, I attend lectures and conferences of different trainers to continue the training. A coach has to be constantly learning, he can’t stagnate! It has made me ready and willing to take on new challenges.

What were the first thoughts in your mind when Algete CF’s offered you a position in 2012 as coach of the cadetes (14-15 year olds)?

As I said before, I started helping a friend. For reasons of work, he had to leave the team and from that moment I take charge of the team. I was very motivated but nervous, since it was the first time that I was going to train like head coach to a team.

The nerves left within five minutes of the first training and there I discovered that I loved and wanted to continue training.

What were your responsibilities there and how would you describe your time there and at C.D.M Arroyomolinos’ juvenil side in 2013?

When I finished the territorial football coach course (level 2), I had to do six months of practice with a national coach and who better than Miguel Angel García Domínguez “Miguel 1”, who had been professional player in teams like Betis, Sabadell and Espanyol, even playing in the final of the Europa League.

His methods of training, his way of leading the games and the costumes, seemed fascinating to me, and I learned a lot with him.

A year later, Puerta Bonita offered you a position as head coach of the prebenjamín category – how different was it coaching six-seven year olds compared to 16-18 year olds? Was it difficult to adapt?

It is very different to train six-seven year olds. The majority have never played football and must be taught from scratch. But they are not taught only technical questions like controls, passes, strikes with different surfaces, or tactics such as placement in the field, explain the different positions and try them on all, physical improving of their coordination, speed, flexibility, but also different rules to be part of a team, such as respect to fellows, collection of material, showering at the end of training, training assistance …. Coaches are their mirror, their idols, whom they want to please at all times.

What were the first thoughts in your mind when a women’s football club, Oroquieta Villaverde, approached you?

Puerta Bonita created a women’s team which they called Oroquieta Villaverde, and was looking for a coach. I offered because it seemed a very interesting challenge and I wanted to see with my own eyes if there really were differences between men’s and women’s soccer.

Female football has always been on a second stage with regard to male football, but we see that this trend is changing because the desire, the passion, the motivation, are the same and even superior in women’s soccer.

Is there a different methodology in coaching a women’s team? Any thoughts on the resources available at a women’s football team compared to a men’s team?

The methodology I try to use is the same as in men’s football, especially tactically since there are almost no differences here. The four zones: goal, defense, half and attack and above all I attach importance to the transitions, both defense-attack and attack-defense.

The players are disciplined and know what they have to do in each moment. However, where the most noticeable difference is in strength and most goals are achieved after collective play. With that, I put more emphasis on it.

Congratulations on being appointed the head coach of the Fuenlabrada women’s Juvenil A side! How excited or nervous are you, and what are your goals for the season ahead?

I am very excited and looking forward to starting the season. It is a very nice challenge and in one of the most important clubs in Madrid. They contacted me, they explained the project, which I found very interesting and here we are. The goal is to upgrade, difficult but possible.

Given that you worked within what some would say is grassroots football, how well do you think experience in these leagues prepares players for higher level football, and how would you compare it with going through a top club’s youth academy?

I start from the basis that the best coaches had to be in grassroots football. It can’t be that many clubs, put a youth player or someone inexperienced to train the smallest, since in the early years, is where most technical skills are acquired. It is essential that clubs realize this.

Top clubs take this into account, and have magnificent professionals in all categories, starting from the base.

What advice would you give to anyone trying to enter the football coaching arena?

My advice is to train as best as possible and to look at coaches that you know and do well, given that you will have a group of people under your responsibility since you will be a teacher, psychologist, motivator….

My short-term plans are to try to move up with the youth. In the long run … who has not dreamed of being a professional trainer and fully dedicated to it?

In my free time I try to spend with the family. My wife Alejandra, our 2 year old son Ricardo, and our dog Eric. Also, I watch a lot of football on television both alone and with friends.