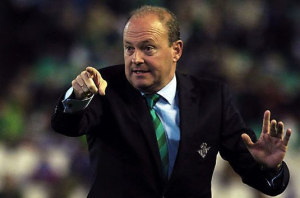 After Steve Clarke was let go by West Brom after a run of four consecutive defeats in the league, it took a while for the board to appoint a new manager. Keith Downing took over on a temporary basis and picked up draws against Hull, Spurs and West Ham as well as a big win at home to Newcastle on New Year’s Day.

After the team had some breathing space, it was last week former Real Betis manager Pepe Mel was appointed as the new Head Coach at The Hawthorns whose achievements include guiding Betis to seventh place in La Liga last season.

Mel watched from the stands in Albion’s dismal display at St. Mary’s on Saturday and realised the tough task he has on his hands. The Baggies only lost 1-0 but were completely outplayed by Southampton and an opening for Adam Lallana was calmly slotted into the net.

The loss to The Saints leaves them just three points above the relegation zone, giving Mel limited time to regroup and discover who he wants in his XI when he takes charge for the first time in a televised match against visitors Everton on Monday night.

As the team is assessed, all players will be out to impress in this large and decent squad Mel has to chose from. Players such as Nicolas Anelka and Morgan Amalfitano have done good for the team this season but have been largely inconsistent in recent times. This is a chance for an outcast like Graham Dorrans  to impress in training and return to the side as the Scotsman hasn’t made a League appearance since September 1st against Swansea.

Wingers Zoltan Gera, James Morrison and Scott Sincalir will all be looking to cement a more regular place in the team as well, the latter having a nightmare of a loan spell so far having been niggled by injuries throughout. The case is the same with Anelka, Mel has choices of Saido Berahino, Matej Vydra, Victor Anichebe,  Shane Long (if he stays an Albion player) and Anelka himself as strikers. All can do a good job and score goals but with the amount of strikers in the squad, the players have been limited to cameos from the bench as there is usually one spot up top with Stephane Sessegnon in the hole.

Pepe Mel hasn’t got it easy so far, an in form Everton side as a first game wouldn’t be good for any manager in charge of any side. When The Baggies visited Goodison Park in August they managed to hold Everton to a goalless draw but this time Everton have since added Gareth Barry, James McCarthy, Gerard, Delofeu and of course former West Brom loan star Romelu Lukaku who has been just as successful in Merseyside as he was last season at The Hawthorns. More recently, Everton dived into the market and signed Aiden McGeady who could make his debut on Monday.

That’s not to say Albion haven’t added more threat to their side since, having added Stephane Sessegnon and Amalfitano who have bolstered their attack and on their day can be a real threat. England U-21 Saido Berahino has had more of an impact on his team’s season than anyone could have called, scoring important goals against Man United, Crystal Palace, West Ham and Newcastle. A man The Toffee’s should fear coming up to this fixture.

New man Pepe Mel needs to bring his own style to the table and it needs to work immediately. Albion fans need assurance that they will stay up in the Premier League and Mel will need to hit the ground running against Everton with games against title contenders Liverpool and Chelsea coming up in February. This is winnable for West Brom and they just need to hit their stride with the new man in charge now.