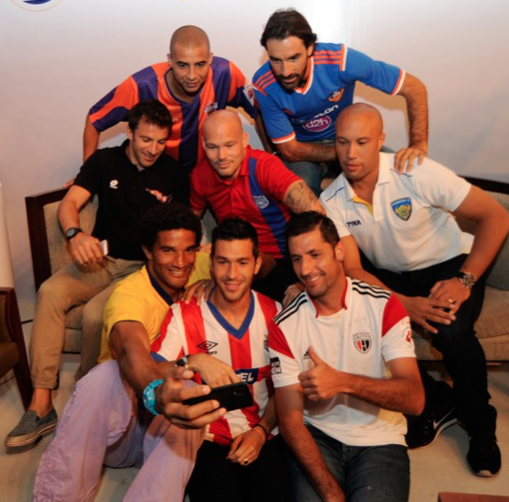 I watched on as the boys screamed tactics at each other and got into a 5-5-4 formation – which is the standard for 15-a-side. The captain of team Messi – Abhishek – then handed me the ball and instructed me to blow my whistle as it was time to get on with the game.

When I signed up to become a sports coach in Kerala in summer 2013 I was prepared to brave the monsoon for cricket and hockey. A few weeks into the scheme I realised even when the weather was perfect, the only game that the boys wanted to play was football. Having grown up around multiple games of street and park cricket in Mumbai this was not the India that I had remembered or expected.

Fast forward a year from my summer in Kerala and the landscape of Indian football has dramatically changed. The I-League – the country’s primary football competition – has been trumped by the creation of the new Indian Super League.

Legends of the game such as Alessandro Del Piero and David Trezeguet have been signed as marquee players by teams, experienced managers Zico and Peter Reid have been recruited and clubs have also established links with major European teams such as Atletico Madrid and Fiorentina.

In total eight franchises have been created in a similar set up the Indian Premier League – a cricket tournament – in a bid to capture the footballing hearts of the nation.

Geographically and politically speaking India, alongside Brazil, Russia and China, is an emerging superpower. Yet it remains a mystery to me how both India and China – which have excelled in so many sports throughout time – have never fully unlocked their footballing potential. China at least qualified for the World Cup as recently as 2002, yet India’s national team have never taken part at the finals of any World Cup. For a nation with over one billion people this is a very surprising fact.

How can it be possible that a country with so many people can not produce a squad of 23 individuals good enough to take on the world’s elite? I of course know that in football terms it is not that simple as quality is far more important than quantity. Yet if a nation the size of India is not coming close to qualifying for World Cup’s then there must be something wrong with their system. This is where the Indian Super League comes in.

The ISL has publicly stated their mission is for India to qualify for the 2026 World Cup. For this to be possible the ISL will have to become a strong, stable league which also improves the quality of grassroots football across the country. None of these are easy tasks especially in a sport which has had problems at the highest level before.

In 2007 the I-League was formed in an attempt to create a league with a higher level of competition in India.  In the 2008-09 and the 2012-13 seasons the I-League was won by Churchill Brothers of Goa yet the two-time former champions will not be present in the 2014-15 I-League for failing to pass the club licensing criteria. Even in the very successful IPL cricket league, teams in Pune and Kochi have disbanded since their inception showing that problems are still rife in maintaining high level club sports in India.

For the ISL to succeed it will have to factor in these potential issues and look to become a sustainable, marketable and interesting league that produces high quality football from start to finish. To achieve this famous team owners such as Bollywood superstar Salman Khan and cricket legend Sachin Tendulkar have attempted to assemble squads full of homegrown heroes, legendary names and stalwarts of professional football.

The eight franchises must feature one ‘marquee player’, seven additional foreign players and 14 Indian players of which four must be local to the city that the team is based in their squads. With the squad being made up of a minimum of 22 players – 14 Indian and eight foreign – the hope is that the Indian players will learn and improve playing regularly against a higher calibre of players from across the globe. The marquee player of each team will be trusted by the owners to captain and guide the domestic players in an attempt to better them as individuals.

However a criticism of the ISL has come from sceptics suggesting the marquee players are all semi-retired ageing former professionals potentially seeking one last lucrative pay day. That criticism is countered by the fact that a three month tournament taking part between October and December in the height of the European domestic seasons was never going to attract current stars of the game. Therefore having teams led by former World Cup winners speaks volumes for the ambitions of the ISL and this should be applauded not criticised.

The ISL is a brand new tournament which has been able to successfully recruit big name players with nothing to prove such as Robert Pires. The money for these players will be very good but the chance to be part of something which could potentially lift-off football in India would have been a key factor in persuading the players to come. All eight teams will hope their foreign stars will have a positive impact on their local teammates which can be carried forward into the Indian national team.

Despite being in its infancy the ISL has already pulled off some relatively major coups. The signings of Greece’s 2014 World Cup captain Kostas Katsouranis alongside former Premier League stars Nicolas Anelka and Elano by Pune, Mumbai and Chennaiyin respectively will bring solidity, flair and creativity to the league. Players like this are so important to the competition as my personal experience in Kerala will demonstrate.

The children I coached had access to watch the two best players in the world in Lionel Messi and Cristiano Ronaldo. If supporters are more accustomed to seeing Champions League superstars in regular action on television then they could easily choose to turn their backs on the ISL if the standard of competition is not to their liking.

However this issue can only be judged after the inaugural competition has finished. The future transfer plans of ISL teams will be shaped firstly by how well the competition does on the whole, and secondly how well their own side performs. Anelka, like all the other big names in this years competition, was mobbed by a huge crowd of fans on arrival in India and he will surely be mobbed again should he fire Mumbai to the title.

A good tournament for all the foreign stars could lead to a new wave of bigger stars in 2015. Yet a poor tournament with underperforming marquee players and dwindling crowds could see the tournament abandoned after it’s first edition.

The ISL represents a serious investment in attempting to restructure Indian football. Eight teams with eight big stadiums will attempt to create long-lasting memories for the Indian public from the opening match between Kolkata and Mumbai on October 12 to the grand final on December 20. India will hope the ISL can springboard their national team from a lowly 158 in the FIFA World Rankings to much higher up in years to come.

To unlock India as a footballing nation something major has to be done and the ISL is certainly a good starting point. Now it is up to the ISL to take centre stage and as the tournament motto proclaims: “Come on India! Let’s football!”

The eight franchises with their marquee players (MP) and managers (M):