With the Indian Super League ready to kick off this Sunday, here’s a look at all the teams and how the teams stack up. 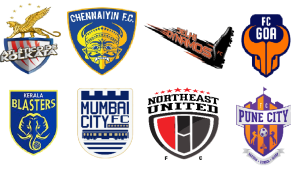 It is the most expensive franchise of the league, and has the largest stadium of all the teams. The team being based in the football mad East Indian state of Kolkata will ensure they will have no problem filling up the 120,000 capacity Salt Lake Stadium.

Kolkata also hosts the fiery derby between East Bengal and Mohun Bagan and has the most raucous supporters in all of India. The way the hysterical Bengalis greeted the arrival of Diego Maradona is an indication of the way they revere their football gods. Current Spanish champions Atlético Madrid have a stake in the team along with one of Kolkata’s favorite sons, the former cricketer Sourav Ganguly.

Indian players to watch out for: Gouramangi Singh, Jeje Lalpekhlua

The team based in south Indian state is owned by Indian cricket captain Mahendra Singh Dhoni and Bollywood actor Abhishek Bachhan supported a coterie of backers.

South India loves its cricket but has an appreciation for other sports too, which will ensure that the team led by the controversial Marco Materazzi wouldn’t be short of spectators creating an atmosphere like they do in the cricket version of the league. Along with foreign stars of the past like ex-Manchester City Elano, and ex-Manchester United Silvestre they have one of the brightest Indian youngsters in Jeje Lalpekhlua.

Indian players to watch out for Steven Dias, Francis Fernandes

The team based in the capital city managed to attract the biggest player in the inaugural league in Alessandro Del Piero. The Italian World Cup winner and Juventus legend had two successful years in the Australian league before embarking on this Indian adventure.

Dutch outfit Feyenoord hold a stake in the franchise primarily owned by the cable company, DEN Networks. India’s capital being a melting pot of diversity with people from across India calling it home will ensure the team will have a heterogeneous fan base.

Indian players to watch out for: Clifford Miranda, Jewel Raja

Goa is one of the very few Indian states which can proudly proclaim that cricket is at best their second favorite sport. The former Portuguese colony has a very proud history in Indian football and hosts four of the most successful and well run clubs in the ten team I-League first division.

The franchise pulled out a major coup by appointing the Brazilian legend Zico as their manager. It is owned by the Indian cricketer Virat Kohli among a host of businessmen. Filling up their 25,000 capacity home stadium will not be an issue for this team based in a football adoring state.

Indian players to watch out for: Mehtab Hossain, Renedy Singh

The team based in God’s own country doesn’t look the strongest on paper with it not having the most high-profile foreign imports and also failing to attract biggest names in Indian football but discounting their chances in the inaugural league will be a mistake that their rivals shouldn’t make.

The team will be led by vastly experienced former England Number one David James who will be taking up the player-manager mantle after playing a similar role at the Icelandic club IBV. Englishman of Indian origin, Michael Chopra, formerly of various English second division sides is another player acquired by the franchise. The club owner being the most loved Indian cricketer of all, Sachin Tendulkar might just make them everyone’s second favorite team.

On paper the franchise based in the West Indian city of Mumbai looks the strongest of the lot. The team has appointed former England manager Peter Reid, who brings with him vast experience both as a player (more than 500 appearances in the English league) and as a manager.

In their marquee signing Nicolas Anelka they have a player who can still play at a fairly decent level having appeared for West Bromwich Albion as early as last season. The Mumbaikars will be looking at him to make the difference on the pitch. In Lalrindika Ralte they have one of the brighter prospects in Indian football.

Indian payers to watch out for: Robin Gurung, Aiborlang Khongjee

NorthEast United FC as the name suggests represents the entire north-east region of India which comprises of eight states. The whole region has a massive football following where it is more common to find youth discussing Championship, or Spanish Segunda division than the cricket score.

The masses love their football and most of the clubs in the region play in packed stadia. Indian film actor John Abraham and the I-League outfit from the region, Shillong Lajong are the major stake holders in the club. Spanish World champion Joan Capdevilla will lead the side.

Indian players to watch out for: Lenny Rodrigues, Joaquim Abranches

FC Pune City is the second club based in the state of Maharashtra; the fast growing city has acquired the French legend David Trezeguet as its marquee signing.

Hindi film stars Salman Khan, and Hrithik Roshan are major stake holders in the outfit which also has the Italian club Fiorentina FC among its owners. The vastly experienced Italian Franco Colomba will take up the reins of the side and has brought with him a clutch of Italians to the team.

Freelance sports writer with special love for football. Devours football books with relish. Quizzing and food connoisseur who aims to finish a triathlon some day.