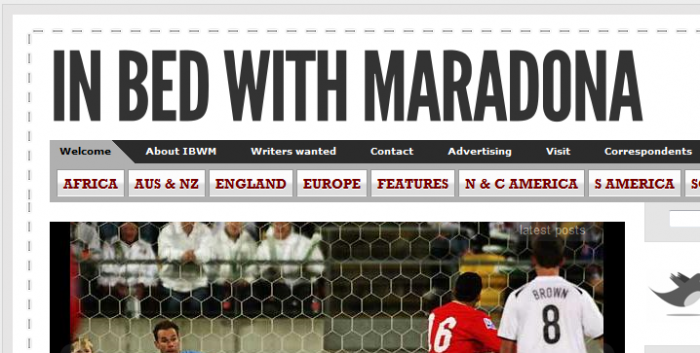 As more and more football blogs continue to crop up and become mainstream media outlets for fans the world over, Back Page Football takes you into the minds of some of the people who have crossed the divide into the 2010 football blogosphere. Today, we begin with Jeff Livingstone who concoted his uniquely titled blog In Bed With Maradona.

What led you to create the blog, and how did you come up with such a unique and entertaining name?

The run up to the World Cup just did for me.  I just couldn’t face the wall-to-wall bullshit (can I swear on here, is that ok? – of course) that the English media specialise in.  The jingoistic flag waving, don’t like it up ‘em, ‘this is our year’ rhetoric wasn’t for this pilgrim, so I decided to start IBWM.  Originally, it was just going to be a diary following El Diego, but we got a good following going and world football is my bag.

The name?  It’s like this; I’ve got a tiny little netbook and was lying in bed watching a stream of one of Argentina’s World Cup qualifiers, I forget which.  Anyway, the good lady wife turned to me and said “you spend more time in bed with Maradona than you do with me”.  Priceless.  Businesses give marketing companies millions for that sort of branding, and here it was, lying next to me.  She’ll come back one day.

What do you hope to cover on the site over the course of the season and why should we be hitting the subscribe button?

There’s a subscribe button?  I don’t think it works.  Why?  I like something different, I like to hear about new players and read articles that are off the beaten track.  I’ll quite happily listen to someone talking about the finer points of Didier Drogba’s game, but I’m likely to fall asleep.  Tell me about some kid breaking goalscoring records in Honved’s youth team, or some loon in Iceland that celebrates goals by punching a linesman, and I’m all yours.

I read the background on a new website this week that boasted a team of writers ready to change the way we look at football.  It looked good, but the first 12 articles were all about Chelsea and Manchester United.  That’s not different at all is it?

There’s a whole world of football out there, not just the top clubs.  I like to think IBWM’s a bit different in our approach and I hope that appeals to our readers.

You’ve built an impressive team of writers at IBWM, was there much scouting involved?

Some I’ve asked to write, others have been in touch and I’ve loved what they do.  I’ve been very lucky to have the support of hugely talented writers like Sam Kelly, Jack Lang and John Dobson from the start, who all agreed to help.  In addition, we’ve added other brilliant writers like Ben, Radu, Michal, Gary, Fer and loads of others who have bought in to the whole IBWM idea.  Feel shit that I’ve not named them all.  They know who they are.

How do you promote your blog and build it from its earlier grassroots level?

I was a complete twat on message boards in the first few weeks and got banned from a few; luckily, Sam followed me round picking up the pieces and making apologies for my car crash marketing.  I wouldn’t recommend that approach though as you’re more likely to piss people off.  I’m good at that.

I think NewsNow is a good way of getting your site noticed, but there’s always a risk that you lose a little integrity in among the sites that are just chasing ads.  It’s still a good resource to use though.

There’s no plan for IBWM, there never has been.  Keep writing, I guess, and hammer Twitter………Jesus, like I would know.  What a conceited twat….you should have got David Speedie; I’m not interview material, am I?

You yourself seem to have had a major interest in football for a number of years now. What leagues do you like to keep updated on and what interests you most in football these days?

I’ve been a football fanatic since I was a kid.  My first game was Newcastle v QPR in 1980; I was 6 and remember Mick Harford scored.  I just enjoyed the noise and the smell of tabs.  It’s been a love in for me ever since and I’ve been lucky enough to travel, write, coach, scout and just enjoy football at all levels since.

I enjoy the Premier league but I’ll watch anything.  Non-league, Europe, Asia, South America, anywhere if I’ve got the time.  I’ve really been quite taken with the CONCACAF Champions league lately, which you can watch free from their website, which is pretty good.  There’s some real talent in there and some good football.  Alistair does some great coverage on IBWM.  Sorry, that was uncalled for.

Totally.  I know that Facebook has its merits but there’s real community thing on Twitter now.  You’ve got really great bloggers mingling with the best journalists and it’s created quite an eclectic mix.  I’m going to christen it as a scene, right now, right here!  Indie football! IBWM is the Hacienda!

Some top journalists have found their way onto Twitter recently where interaction has brought them closer to bloggers and fans. Is this good or bad for football writing?

I think it’s been great, as it goes.  You’ve got excellent journo’s like George Caulkin, Kay Murray, Iain Macintosh and Dan Brennan who have really embraced it.  It’s clearly worked really well for several bloggers too with Zonal Marking, Danny Last and Ollie (Who ate all the pies) becoming part of the mainstream, all well deserved, they’re all excellent.

If you get a RT off Marcotti or Sid Lowe then that just makes your year, doesn’t it? Like you know what you’re taking about – a rare feeling for me. It works both ways though; journo’s are able to get a feel for topics and their audience too.

Football blogging is an ever-strengthening niché. How do you view this new era, where you can get opinions of any league, match and news story in seconds?

How do I view it?  I’ve got one of those posh phones…..that’s not what you meant is it?  I think it’s brilliant, I really do, and to my mind, it’s energised football writing.  When I was a kid, if you missed the tail end of Grandstand you had to wait until a guy knocked at the door with a copy of ‘The Pink’ just to get the scores.  Opinion was Jimmy Hill and whatever the press wanted to trundle out, totally unchecked.  Now you can get any info you like, at any time, which has to be a good thing.  We’ve all become news junkies anyway haven’t we?

Are there any other blogs you keep an eye on (other than yours truly of course)?

There are dozens that are really close to my heart and I don’t want to miss any out so I’ll duck that one!  Any of the blogs/sites that the IBWM writers run – there are always links at the end of their articles – and Back Page Football is pretty damn good!

Over the last week, I’ve really enjoyed reading larubiasmerengues – @WhiskyCarlsson on twitter – she’s got a real edge to her writing that you don’t see everywhere.  She’s going to be doing some stuff with us soon.  I also really like what Barry is doing with his coverage of Shinzu S-Pulse from the J-league at UK Ultras.  Again, something different, right up my street.

Thanks for your time Jeff, best of luck for the seasons ahead.

4 thoughts on “In the Blog: In Bed With Maradona”