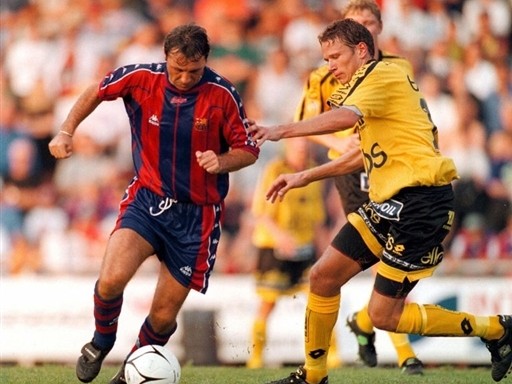 Charasmatic, fiery and unbelievably talented, Hristo Stoichkov, who turns 45 today, will most likely never be overtaken as the biggest name ever in Bulgarian football. Willy Gannon explains why.

“There are only two Christs; one plays for Barcelona, the other is in heaven,” so said Hristo Stoichkov before collecting his award for European Footballer of the Year in 1994.

With Hristo directly translating as Christ, you could be forgiven for thinking he was joking and that it was a play on words…but you’d be wrong. Stoichkov had three massive elements to his person, a God-given skill, a God-sized ego, and a Devil of a temperament.

Starting his career as a mere 16-year-old with local team Hebros, Stoickov quickly became the bright young star of Bulgarian football. Even then, his technical skills stood out. As a left-sided winger, he terrorised teams with his pace and precision and it came as no surprise to see CSKA Sofia, the biggest team in the country, come in for the young prodigy. Within a year of signing for CSKA, they began to realise that this precocious talent also had a wild temper, and in 1985 he instigated a brawl in the Bulgarian Cup Final against Levski Spartak. The game had become a wild affair with both sets of players guilty of X-rated assaults.

Although CSKA Sofia won 2-1, Stoichkov and six other players were suspended for three months each and both teams were formally disbanded in disgrace after the game. CSKA Sofia had their name changed to CFKA Sredets and our young Stoichkov returned to action a couple of games into the next season. He came back in imperious form and began to add goals to his game with Sredets now  employing him as a left-sided forward in their new 4-3-3 formation.

Around the same time, a Golden Generation of players were beginning to come of age and none summed this up more than Stoichkov. Players like Yordan Letchkov, Illian Kiriakov, Krassimir Balakov, and the goal scoring machine of Emil Kostadinov were all starting to shine and European football was starting to realise that a new force was emerging. With Stoichkov as the focal point, Sredets swept all aside in Bulgaria on their way to yet their third title in a row. Our prodigy was finally beginning to fulfil his promise and scored an incredible 38 goals in 30 games as he won the European Golden Boot.

Although it really wasn’t until Sredets made a run in the European Cup Winners Cup that people outside Bulgaria finally realised just how ridiculously talented Stoichkov was. During the journey to the semi finals, Sredets knocked out Panathinikos and Roda JC, before coming face-to-face with Johann Cruyff’s “Dream Team” at Barcelona. La Blaugrana won the two legged affair to progress to the final but it was Stoichkov who stole the show. Cruyff put in a bid immediately and snapped the young star up for the following season. However, Stoichkov’s fragile temper was to get the better of him. In his debut season at the Camp Nou he disagreed with a refereeing decision and starting shouting at the official before stamping on his foot, leaving the ref injured! He was given a two-month suspension and Cruyff’s decision to bring the volatile Bulgarian to the club was questioned at all levels. Despite the suspension, Stoichkov still managed to score 20 goals from midfield that season and the inquisition relented. But not before Stoichkov questioned Barcelona’s director’s parentage…live on television!

The signing was to be the inspiration behind Barcelona’s best-ever period. With Stoichkov pulling the strings from the left side of midfield, Cruyff’s Barca went on to win the league for the next four seasons (91, 92, 93, 94), the European Cup (92), the European Super-Cup (92), the Copa Del Rey (90), the Super Copa de Espana (91, 92, 94). The name “Dream Team” was truly deserved with players like Ronald Koeman, Bakero, Salinas, Michael Laudrup, Nadal, and current manager Josep Guardiola, not to mention Gheorghe Hagi, Romario, and Stoichkov himself, as Barcelona played some of the best football ever seen in Europe. Hristo had come of age; he orchestrated every Barca attack with the skill of a composer. His rapier-like attacks, slicing though every opposition, his technical skill unsurpassed, his dribbling sheer perfection, his passing impeccable, and his shooting laser perfect. Stoichkov deservedly won the European Footballer of the Year award in 1994.

During his time at Barca, he regularly clashed with his idol, Cruyff where the relationship between the two could be described as fractious at best. After one massive argument with Cruyff and the press, Stoichkov told them “I am not talking to any of you bastards until November!” Cruyff’s response? Another argument!

It would be unfair to say that Stoichkov was a volcano constantly on the verge of eruption. In 1992, he paid for the 1992 European Cup Finals broadcasting rights for Bulgaria after the National broadcaster could not afford the fee and his amazing acts of benevolence have become the stuff of legend back home. But something else was happening in Bulgarian football. Stoichkov, its undoubted star, now had ample support. Most of the country’s best players had been exported to the top leagues in Europe and as the World Cup in America came around Bulgarian football was at an all-time high.

Stoichkov may have been part of the Dream Team at Barca, but he was also the centrepiece of Bulgaria’s Golden Generation.

Without a World Cup win in their country’s history, Stoichkov led a quietly confident Bulgaria team to USA ’94 but few gave them any chance of progressing after drawing Nigeria, Greece and Argentina in the group stage. Their lack of experience showed in the first game when they froze against Nigeria who swept them aside with a comprehensive 3-0 win. With Greece up next before Argentina, a win was the minimum that Bulgaria needed to progress. With Nigeria registering a big win against them and with Argentina destroying Greece 4-0, goal difference was always going to be a factor in deciding this group. Bulgaria took to the pitch against Greece like men possessed and hammered them 4-0, with Stoichkov bagging two. Argentina beat Nigeria 2-1 to set the group up on a knife edge going into the last game. Mathematicians all over the world still suffer headaches with this one.

As we entered the last group game, Argentina were top of the group with 6 points and a goal difference of +5, Nigeria had 3 points and +2, and Bulgaria had 3 points and +1. Depending on the result any team could go out as it would come down to a head to head battle. The cut and thrust of it meant that Bulgaria had to win by two clear goals. Their cause was helped by Diego Maradona’s disqualification from the tournament after cocaine was found in his urine sample, something he strenuously denies to this day. With Argentina reeling from the loss of their prime inspiration, Stoichkov missed out on the chance of a master vs. master battle that so many had looked forward to. But he was not going to let Maradona’s absence spoil his World Cup. The game was a tight affair, with Argentina spoiling throughout, and Bulgaria found it hard to find a rhythm. Despite Stoichkov being under close attention from Argentinian defenders he was still the best player on the pitch. 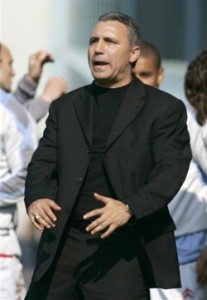 In the 61st minute, Stoichkov and Bulgaria got the moment they had been waiting for. Balakov intercepted a cross from Caniggia and headed the ball wide to Kostadinov whose perfect pass sent Stoichkov racing through three Argentina defenders. As the keeper came out, he was coolness personified as he passed the ball into the back of the net to give Bulgaria a fighting chance. Argentina packed out their defence and Bulgaria crashed upon their wall time and time again as they searched for that elusive goal. As the game headed into injury time Argentina were actually top of the group but all that changed in the 92nd minute as Sirakov pounced to break Argentinian hearts and send Bulgaria through. Argentina also went through as the best third-place team, but the damage had been done and they crashed out to a Hagi-inspired Romania in the next round.

Bulgaria’s opponents in the Last-16 were Mexico who had topped a group containing Ireland and Italy. Once again Stoichkov was on the mark, scoring his country’s only goal in the 1-1 draw. Bulgaria eventually progressing after they won the penalty shootout 3-1. Germany were next up and in a match regarded by many as being the best of the tournament, Bulgaria won 2-1. Lothar Matthaus had given Germany the lead right on the stroke of half time, but two goals in the space of three minutes from Stoichkov and Letchkov gave Bulgaria a memorable win.

After becoming the fans favourite because of their beautiful expansive football, Bulgaria found themselves paired in the semi finals with Italy. Of all the teams remaining, Bulgaria were the only total footballing side left in the tournament. Italy and Brazil had been grinding results out from the start and Sweden were a tough well organised team, so Bulgaria found themselves as the people’s favourites. As the pressure grew Italy produced their best performance of the competition. Roberto Baggio scored twice before Stoickov replied, but there was to be no way back and Bulgaria went out of the World Cup at the semi final stage. It was a glorious defeat as Stoichkov won the Golden Boot, and was heralded as one of the world’s greatest players.

Two years later, he left Barca for high-flying Parma in Italy. With Stoichkov gone Johann Cruyff’s team failed to live up to the heights they had set and he was sacked the following year. His time in Italy was an unhappy one, marked tightly by overzealous defenders, Stoichkov and his volatile temperament found it a difficult place to play. Defenders constantly wound him up, and their “agricultural” play frustrated him deeply as he only managed to score five goals in an injury-plagued 23 games.

In 1996 Bobby Robson, seeking a leader and an inspiration for his Barcelona team, brought an aging Stoichkov back to the Nou Camp. Although he could not inspire Barca to the league title, Barca did manage to win the UEFA Cup, the Copa Del Rey, and the European Super Cup in his two seasons there.

By the time the 1998 season rolled around, an injury hit 32-year-old Stoichkov was on the wane, and he went back to Bulgaria and CSKA Sofia to try to inspire the next generation. Frustrated with his lack of game time, he decided to earn his coaching badges, and travelled the world for the next five years, gaining experience at lower levels. The biggest impact he had during this time was when he smashed a student’s leg apart while playing for DC United in the MLS; he was sued for this horrendous challenge and eventually settled out of court.