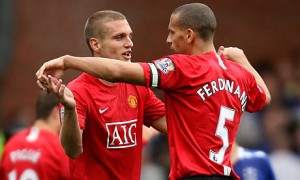 Nemanja Vidić was signed from Spartak Moscow for Manchester United in 2006 in the January transfer window. The fee was approximately £7 million and although did not break into the first team immediately, by the 06/07 season, he facilitated himself in the central defensive position alongside Rio Ferdinand, to form a formidable partnership until recent years.

Although, he has been the United captain since 2011, will he be missed? Or have Manchester United outgrown the towering defender?

Firstly, Vidic is 32 and even though he could play for a few more seasons, he is getting older and has been known to be rather injury prone; and twisting his knee in 2011 was the real set-back. Ever since, he has been in and out of the United starting XI and has been more temperamental. He hasn’t been the same player since his career-hampering injury, and although we have seen glimmers, he hasn’t emulated his previous performances.

However, Vidić is still a world-class player. What he lacks in sustainability, he certainly makes up for in other areas. He boasts:

Over the years for United, he has been outstanding and took home the Barclays’ Player of the Season accolade in the 08/09 season, after United claimed 14 consecutive clean sheets.

This may make one think Nemanja is indispensable for the Red Devils who are having a rather turbulent season. However, with the likes of Chris Smalling coming through the United ranks, I have no worry of him leaving. He has been unpredictable in the last couple of seasons and is not the same players as he was before his fatal knee injury. He has looked reckless and weak at the back. He commands the midfield and defense confidently, but players don’t always respond to it.

I believe Smalling can step into the void that Vidić will leave but then United need a top-draw center back to compliment Smalling. A players such as Eliaquim Mangala or Raphael Varane, who have pace and heading ability would be perfect for the Red Devils.

But more than this, with Ryan Giggs’ possible retirement, Ferdinand never being picked and Vidić leaving, United will lack a true leader. Not only will a defender be lost, but a United figurehead, leader and hero. Emotionally, it will be a big loss, but on the field, I believe if United get the right player in, it will be a seamless transition.

The ultimate question is though; where does he go?

Vidić has already ruled out a move to another English club, not only out of respect but due to him only wanting to play for Manchester United. Any club in Europe would be getting a player with a cool head, bags of experience and a true leader, it makes me think his best bit would be a club new to the Champions League or trying to breaking into it.

The likes of AS Monaco, AC Milan, FC Schalke 04 or Roma would be safe transfers. However, if he really wants a challenge, then I believe a club like Fiorentina, who have a squad with newly injected quality would be perfect. He could find himself in a fixed position for the next two seasons, and go out with the adoration of the Italian fans.

Whoever he goes to, they are gaining a top quality centre back. However, I wouldn’t call Nemanja Vidić a loss, more of an opportunity for United to unleash fresh blood into the team, and another center backs name to be written in the Manchester clubs history books.