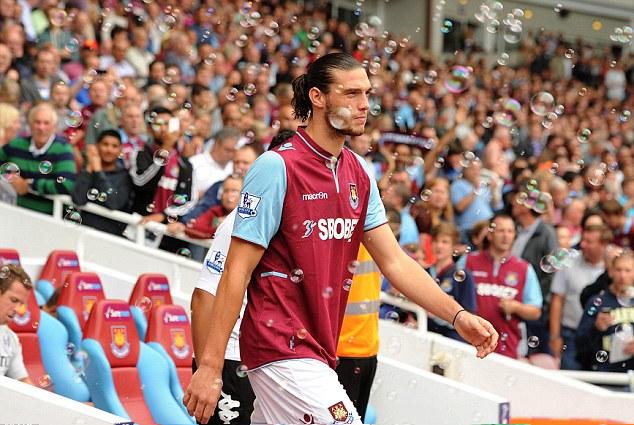 Whether it was Frank McAvennie, Ian Bishop, Julian Dicks, Martin Allen, Slaven Bilić, John Hartson, Paolo Di Canio or Carlos Tévez, the crescendo of the Upton Park roar was that bit louder with a cult hero in tow.

Sure, West Ham’s philosophy has always been centred on attractive football and continuing the fifty-year tradition of producing talented exploits from the Academy of Football, but there is no disputing the other key values the Hammers fans adore: heart, determination, teamwork and loyalty. Whether this is down to West Ham’s origins as the Thames Ironworks – a collection of amateur, iron steel workers who saw football as the perfect interlude from supporting their families – or the exposed East End’s famed, and near-unrivalled, resilience during the Blitz from 7 September, 1940 until 11 May, 1941, it was, perhaps, little surprise that this spirit was instilled in West Ham’s club philosophy by Ron Greenwood from 1961-74.

Mouldable youngsters – from Martin Peters, Bobby Moore, Geoff Hurst, Frank Lampard Sr. and Trevor Brooking to Alvin Martin, Alan Devonshire, Tony Cottee, Joe Cole, Mark Noble and James Tomkins – all embodied/embody this grit in their time at Upton Park, but, curiously, so, too, have West’s Ham’s most successful post-War imports, including the likes of Billy Bonds, Ray Stewart and Scott Parker. After all, Parker – who, intriguingly, was sold to West Ham by Sam Allardyce at Newcastle in the summer of 2007 – was simply magnificent in his dedication and performances for West Ham in 2009/2010 and in 2010/2011 in particular.

During this campaign, Parker gave an inspirational half-time team talk at the Hawthrons, which certainly ignited the Hammers’ cause in coming back from 3-0 down to draw 3-3 with West Brom on 12 February, 2011; scored a goal and assisted another in a virtuoso display during the 3-1 victory over Liverpool on 27 February, 2011, despite taking a high dose of painkillers and using heavy strapping for an inhibiting shoulder injury that completely limited Parker’s training during the previous week; and put in a stirring display in the 0-0 draw against Tottenham on 19 March, 2011, hours after Parker’s father, Mick, died from a four-year battle with cancer. Thus, perhaps, it was no coincidence that Allardyce’s arrival and Parker’s departure were near-simultaneous (Parker played just four matches for Allardyce in 2011/2012).

Sure, it could be said that Parker’s effectiveness without the ball is a hallmark of Allardyce’s favoured players, but the midfielder – even in departing for arch-rivals, Tottenham – also possesses the terrace popularity that Allardyce will, probably, never enjoy with the Hammers’ faithful. Also, with Parker’s replacement and Allardyce’s general, Kevin Nolan, not yet fully setting Upton Park alight, Allardyce still needs a figure to thoroughly stir the Upton Park faithful. Andy Carroll, whose aerial effectiveness and ground hold-up play suits Allardyce’s hybrid (aimed diagonals and occasional, and often underrated, intricacy play on the floor) playing style brilliantly, is the perfect retort to incessant criticism from traditional West Ham fans:

So, amid all the talk of Carroll’s £35 million price-tag, which was always excessive for a man who only had six months of Premier League starting experience, it is important to stress that Carroll is still, remarkably, only twenty-three years of age. From this, a loan move – even if it is, crudely, the best possible way for Liverpool to eventually claim £18 million – could well prove constructive and club-benefiting for Liverpool, unlike, say, the hopeful and peak-aged Alberto Aquilani (Juventus in 2010/2011 and Milan in 2011/2012), Robbie Keane (Celtic in second-half of 2009/2010) and Joe Cole (Lille in 2011/2012) deals. Also, the final months of 2011/2012 – with Carroll slimming down, embracing fatherhood, curbing his ‘Geordie Lad’ drinking reputation and ‘homesickness’, and netting three goals and one assist in the final seven games of the season (managed just eight goals and three assists in previous forty-nine matches for Liverpool) – showed that Carroll is far from out of his depth at the top level.

Still, without even addressing Carroll being the most expensive British player of all-time, the pressure placed on the Englishman was augmented by a serious lack of service and, from this, Carroll is a victim of his own success due to his often immense hold-up play. Thus, Liverpool and England (particularly in the Euro 2012 quarter-final against Italy on 24 June, 2012), when the often selfish Luis Suárez or Wayne Rooney did not provide a respective spark, were terribly guilty of hopelessly punting the ball at, not to, Carroll in search of some divine result other than a cushioned header. So, while Carroll certainly relishes the aerial battle, memorably overpowering ‘monsters’ like Richard Dunne, Christopher Samba and John Terry with Newcastle in the first-half of 2010/2011, he, inadvertently, remains a lazy, get-out option.

From this, unsurprisingly, Carroll’s anachronistic standing as a raw, English, hold-up forward, in the Nat Lofthouse mould, does not fit in with Brendan Rodgers’ already stilted (the 180-page manifesto, the crusade to have Liverpool as England’s tiki taka ‘trailblazers’ and the Bill Shankly comparisons) regime at Liverpool. Yes, there is no doubting Rodgers’ progressiveness, but he has handled Carroll – who the Anfield crowd valued highly, as was seen in their raucous reception before his eight minute cameo against Manchester City on 26 August – terribly. Sure, the Northern Irishman made a point in saying that Carroll “had all the attributes but not the mentality”, but in, somewhat selfishly, having Carroll as a pointless, and near-embarrassing, ten minute, Plan B option before full-time, Rodgers had not handled Carroll – who, it must be remembered, possesses decent ball control – sustainably. So, although Rodgers eventually realised that a potential career-reviving loan move for Carroll is key to Liverpool coming even close to eventually commanding half of their original investment, the Northern Irishman, admittedly, inherited the Carroll conundrum and the striker is partly to blame, too.

After all, this is a man who fell-out  – told the Scot to f*** off, did not shake his hand and stormed down the tunnel – with Kenny Dalglish for, effectively, doing him a favour after substituting the striker for Dirk Kuyt in a tortuous (such was Carroll’s desperation to impress, he even, clumsily, dived for a penalty on 9’ and told Alan Pardew, his former manager, to f*** off you c***t when the Newcastle manager lambasted Carroll for the dive) homecoming at St. James’ Park on 1 April, 2012. It was the perfect evidence of Carroll’s sensitivity as, having persevered at Newcastle under six managers, the striker does not take rejection lightly and his self-inflated (partly owed to his £80,000 weekly wage at Liverpool) belief – earlier in the summer – that because he is an international striker he automatically ‘deserves’ European football, shows just how close Carroll’s club career came to seriously stagnating.

So, in not ‘fatefully’ returning to Newcastle – admittedly, most, if not all, of Newcastle’s fans would feel that £18 million could be spent a lot better, given Papiss Cissé’s and Demba Ba’s exploits and Newcastle’s now unsuited, dynamic, fast-paced and intricate playing style since 2011/2012 – Upton Park could well prove the perfect sanctuary for Carroll. After all, even with the temptation to venture to the notorious Faces nightclub in Ilford or wander centrally towards Soho, West Ham – despite a potential relegation dogfight, which, ironically, seems to have already revived Carroll’s footballing passion rather than him going through the motions as did at times at Liverpool – will offer everything Carroll requires to restore his footballing reputation, confidence and ‘Angel of the North’ swagger and presence. 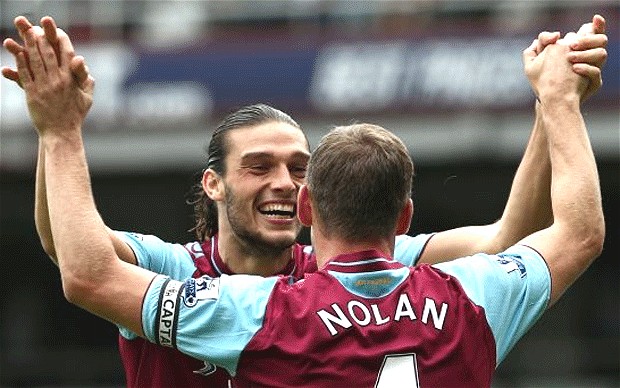 Remarkably, that is without even considering the two main positives of the move to Upton Park: fans’ undying support for their star player and Allardyce’s tactical set-up, with Nolan’s near-telepathic (even twenty-one months on, as was seen in the 3-0 victory over Fulham on 1 September where Fulham, foolishly and feebly, double-marked Carroll to allow Nolan to free roam) understanding with Carroll and Matt Jarvis providing a consistent inlet, with the winger hitting the most crosses in the Premier League last season, 218, and Carroll winning the most headers, 152.

Clearly, with this Moneyball-like, statistic research, Allardyce has already had an often underrated alluring effect on yet another signing:

It’s great to be here at West Ham and all signed up – I just can’t wait to get started now. I want to be playing games and obviously hoping to score some goals. I know the manager well and some of the lads, so it is nice for me to come to a place where I know people.

I’m hoping to add a lot of goals and create a few chances. I know Sam from Newcastle and he was a massive reason for me coming. When I worked with him at Newcastle it was great so it was a no-brainer really.

In witnessing Chelsea’s undying support for Fernando Torres and Roman Abramovich’s El Nino-influenced summer dealings (Eden Hazard, Marko Marin and Oscar), one cannot help but feel sympathy for Carroll’s predicament in being the immediate replacement for one of Liverpool’s greatest ever strikers and then, a season and a half later, not fitting in with Rodgers’ framework. However, in lowering his short-term sights and putting his European footballing dream on ice, Carroll will aim to maintain his England place (Roy Hodgson values the fertile ground outside the top six places) and earn another shot with a club competing in Europe again within a couple of seasons. Whether that is with Liverpool, West Ham (seems beyond implausible, but would adhere to Gold and Sullivan’s seven-year plan) or Newcastle, only time will tell.