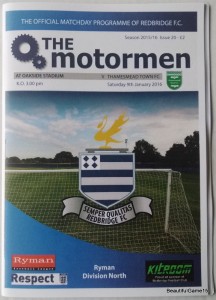 It’s chilly and still light as I enter my local Underground station and start an hour and a half of personal hell – rush hour. Living on the peripheries of North London means that the going into town is relatively calm, and there is still enough room to swing a cat and enjoy my free copy of the Evening Standard, reading all about how Harry Kane does not feel there are any ‘bad apples’ at Spurs anymore.

It’s only when I change trains at Bank am I overcome by the mindless one track drones, bombing around in brown shoes or tailored suits and scruffy trainers, armpit to face, so close I can tell what someone had for lunch.

Tonight is another post-hurricane match after Storm Imogen had being doing her thing and turning plenty of clubs’ pitches into an unplayable mess. However her wicked reach has not been able to affect the Oakside Stadium, the home of Redbridge FC, whose Twitter account defiantly proclaimed earlier in the day ‘GAME ON’.

A few stops from the imaginary secondary school Grange Hill, I seem to have been transported to a station from a bygone era. Barkingside’s ornate green iron work pillars, holding up a decoratively edged white roof, along with a men’s and women’s waiting rooms, I think it is fair to say you don’t get them like this up North.

Tom is a couple of trains behind and when he arrives he is fully snooded up. Such is the proximity of the ground to the station a solitary floodlight rises from behind the opposite platform. It is only a short walk along a whisper-quiet road with the occasional lamp post lighting the way, each adorned with a Clapton FC Ultras sticker.

Once we have navigated the potholed driveway of the stadium, past the children in Redbridge tracksuits carrying a Tesco bag for life full of footballs from the boot of a car and a group playing five a side on the nearby enclosed pitches, we are warmly greeted at the grounds blue and white gates by the Redbridge webmaster, Adam.

He is very quick to fill us in on what the evening has in store and sadly it’s a familiar story we have heard many times before. “We’re low supported, they’re low supported”, he tells us. It all comes down to “lots of competition”, he explains “draw a circle around us and you’ve got Dagenham and Redbridge and West Ham”. The fact West Ham are at home tonight, means the attendance can take a knock. Perhaps the biggest problem is the fact that, “Not many people know we are here”.

Tea is first on the agenda. The double doors of the clubhouse are open, ‘Thong Song’ by Sisqo is playing in an otherwise quiet bar, one man studies his programme and a woman tucks into her dinner; no tea here though, only the hard stuff. On the way out we notice the Redbridge FC doormat, which 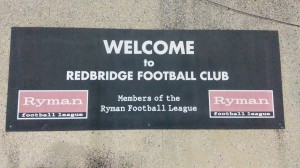 is a dark red, and has a badge on it that’s remarkably similar to that of Benfica.

‘Jeannette’s’ – a large open window at one end of a blue Portacabin just next to the clubhouse is the place for a cuppa, as well as anything you might want to eat “the lure of onions is too much” says Tom, but he fights his urges.

“The most makeshift stand we have seen, it’s literally held up by scaffolding” is Tom’s impression of the main stand, which covers a large portion along one side of the pitch, just in front are two squat flat roofed dugouts. Despite its minimalist design, the red flip up seats work and there is a roof over our heads, so tea in hand we aren’t complaining and take a seat. Once settled, Tom drops a painful bombshell.

“I’ve done the unthinkable, I’ve brought my own dinner” he tells me. Once I pick myself up off the floor, I claw the dagger from my back and hand it back to Tom to help him tuck in to his chicken couscous. I sit glaring as my companion lives up to every Dalston stereotype, watch out Tom you might get some in your massive trendy beard. He knows full well I’m a little disapproving, “this going in the blog?” he asks, “yep” I reply, “I knew I should’ve eaten it in the toilet”.

The rest of the ground is sparse, much like the surroundings. Not too far in the distance a large illuminated tower block is the only thing that sticks out in the night sky, and, along with the occasional rumble of a train behind us, it’s peaceful. Behind one goal is an uncovered terrace, the other a thin strip between the edge of the pitch and the green fence for spectators. Opposite is a corrugated roofed lean to, but at least you won’t get wet.

“Oh the old tea bag trick” says a delighted Tom, as he squeezes it out, and revels in the warmth it restores back in his fingers. Although he describes it as one of the “milkiest teas you will ever have” it’s doing the job and goes down well.

The tranquility of the empty ground is all of a sudden shattered, as the large black speaker  suspended above 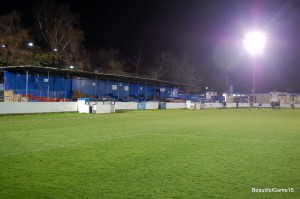 us comes to life, cracking out a mix of garage and RnB. “Know where all the money went” says Tom as we are engulfed with music. On a couple of occasions such is the volume we are forced into that type of conversation you have in a nightclub, a few notches down from screaming in each others faces. The introduction of a bit of entertainment sparks Tom’s great philosophical question of the evening, “I wonder what it would be like if football was played to music?”.

As the players emerge to warm up never has such a description of an activity been so relevant, the cold is really biting. Most walk out with their hands in their shorts, trying to preserve as much heat as possible. Many test the conditions underfoot – the pitch passed inspection this afternoon – but I’m sure it would’ve been a close call.

All of a sudden rain starts to fall like a special effect on a Hollywood film set. The players keep up their high spirits, mainly because with the combination of the rain and cold you would be crying otherwise. As we venture into the stop-start rain, Tom looks at me smugly “Think the snood is going to come in handy”.

Redbridge are doing some passing drills, one player demands more “talking” – he wants more animation from the players – “very quiet today lads” – compared to Thamesmead Town who are full of beans. Perhaps this is down to the fortunes of each team, Redbridge FC currently sit second from bottom and Thamesmead are seventh in the league. In reality you could not have two teams with more vastly contrasting seasons.

After a full lap of the pitch and after spotting one gent squeeze his way in through a disused turnstile on one corner of the ground – the VIP entrance perhaps? – we bump into Adam again, this time clutching a laptop, on his way to perform one of his many match day duties as stadium announcer. 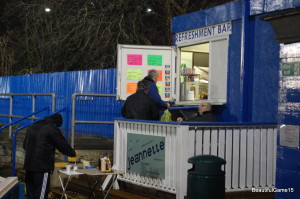 “Too long” he replies jokingly when I ask him how long he has been been involved with the club. In fact he has been at Oakside Stadium as long as RFC have, since 2001. He also lets me in on a bit of added drama that surrounds tonight match, the current Thamesmead manager used to be Redbridge’s – he took them all the way to the 2nd round proper of the FA Cup, the furthest ever and a moment in the club’s history that Adam says “we still talk about today”.

“Let’s go” shouts the referee, banging on the door of the home changing room, with equal force he gives the away changing room a bashing “Thamesmead let’s go!”. The Redbridge ‘keeper brings a touch of Turin to East London in his glorious pink shirt. Each player passes a sign on the door that leads to a blue caged holding area before they walk on to the pitch “This is Redbridge”.

“Come on Thamesmead!” shouts one of the few travelling fans, most of whom are wearing some green and white, the same as the team in their hooped shirts.

Adam offers a “warm welcome to the players and supporters” of Thamesmead, his voice clearly heard over the Ministry of Sound sound system