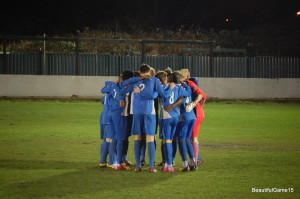 A few late arrivals are grabbing something from Jeannette’s “how are you darling?”, and may well have missed the first goal of the game, a header from a corner with only two minutes on the clock, TM go ahead.

There seems an air of inevitability amongst the few fans here, I get the feeling it sums up their season perfectly. The steward standing next to us lets out a simple “oh well”.

As far as the turnout is concerned, I’m sure we’ve seen worse. Most are sitting in the main stand, except for two TM fans who are standing behind the RFC goal.

RFC’s keeper is a busy man in a frantic first fifteen minutes, TM are attacking at will. When they roll the ball across his six yard box from the flanks, just waiting for a tap in, but no-one is there to take advantage, he screams, he is almost rabid “too fucking easy!”.

When TM get their second, with not even a quarter of an hour gone, he takes it up a notch, this time what he is saying is not even audible, imagine an extra from 28 Days Later in a bright orange jersey. The bench and players are all in agreement that there was a foul in the build up. Such is the ‘just get on with it’ attitude of the referee so far, I’m not sure he even has a whistle.

At least the two TM fans behind the goal are happy, they have the best seat in the house so far, and celebrate with each other.

The early frenzy has calmed, and the RFC keeper makes a good save from a corner to ensure TM  don’t get a third. The home team have a penalty appeal waved away, the RFC keeper who we can at least understand now, pleads with the man in charge “referee anything will do”.

RFC are now at least getting in the opponent’s half, and I think with their first effort on goal, score much against the run of play. Two RFC fans using the roof of the home dugout as a table to eat a burger off, at least have something to cheer, it’s been pretty barren up to now.

The TM fans just along from us are less than impressed with the defending “he’s not off side, you’re just standing around like statues!”

The couscous is back out again as Tom finishes off of his dinner, but it’s just not scratching the itch, “I would kill for a cheese burger”.

What was one way traffic, since the RFC goal has turned into an end to end encounter. The home keeper has a lucky escape when he flaps for a cross, that falls to the feet of a TM player who is instructed by a fan to “FINISH IT”. He shoots, the floundering keeper slips and watches the ball roll past him, with his heart in his mouth, but luckily sees it hit the foot of the post and roll into his arms. 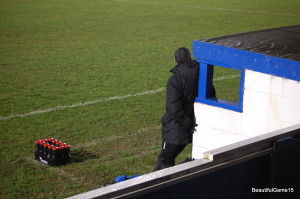 Behind the RFC goal is a small hill, with some wasteland beyond and not a lot else. On top two children, like the boomerang wielding ones from Mad Max sit on a pile of pallets, but these are not the spawn of a post apocalypse universe, they are the ball boys.

Taking turns to scurry beyond the reaches of the floodlights, into the darkness, miraculously finding the ball in the pitch black amongst the long grass.

A lightning burst of pace from an RFC forward, he breaks free of the TM defence, finishes calmly, the game is all square. The RFC bench plead with the players “don’t let it slip back”. The tide has really turned now, Tom is quite right when he says TM “are on the back foot now” one home player agrees with him “we are on top”.

Once again the referee and his assistants get an earful from TM “fucking linesman” but I don’t understand what their gripe is, he was just too fast for them, the defenders just watched him go by. One of their fans puts it perfectly “what are we doing, someone going to make tackle?”.

One RFC fan starts to sing, but much like their keeper, we can’t make head nor tail of what he is saying.

Such is the high level of whingeing, from players and staff of each team, the referee has to take a minute to talk to the TM bench. If there was a Champions League of moaning, these two would at the same standard as Barcelona or Bayern Munich.

Tom’s healthy living still continues to rankle in the back of his mind “I could do with a Kit Kat”.

The half finishes with a member of the RFC bench kicking a ball up the field for a corner, but instead crashing off the side of the face of his counterpart on the TM bench, RFC have probably their best move of the half you could even call it slick, and getting justifiable praise from the bench “good football, unlucky” and the referee continues to get shit from all quarters, this time from an RFC fan “what a clown”.

Determined to get some life back in our hands, Tom heads off for tea, and I get chatting to the two TM fans from behind the goal. “Go everywhere with the ‘mead” they tell me, “we’re about the only ones”. They had a back up though, if RFC’s game did not go ahead “if this had been called off, we would of gone to Cheshunt”.

With various badges, and one wearing a Dartford hat on, it’s clear it’s just about wherever they can “catch a game”. 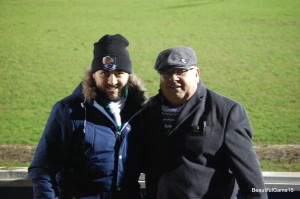 The RFC subs have lined up water bottles on the bench of the dugout, and from a few feet away are taking turns at a bit of target practice. Along with myself getting the odd stray ball, one player hops over the fence to get some too, and one players wayward shot crashes off a seat just in front of him, “easy lads”.

Moments before the players come out, one RFC fan wants to get some chants going, and discusses the options with other supporters, “he’s one of our own” he suggests would be a good choice for Charlie Portway the scorer of the first goal. When the players do appear he is off “here we go” taking up position behind the TM goal.

The solo singer is quick out of the traps, within moments of the restart, with one song after another “ohh Charlie, Charlie”, “come on Redbridge, come on Redbridge”, “he’s one of our own”.

“Let’s start this half, like we started the first” commands a clapping TM player, getting the troops geared up, and he almost gets his wish granted when they almost score their third. A scissor kick in the box, following a fine bit of chest control is blocked.

Standing behind the the home dugout, or I should probably say limping, is an injured first half RFC sub, who by the sounds of it has broken a toenail. A friend is less than sympathetic about his pain “you should pull it off with pliers”.

“Fucking get in” shouts a TM player when they go ahead, again RFC are undone by a corner, the initial header is blocked, but is tucked away from the resulting scramble. TM’s fourth is not far behind, a free header at the back post, to say set pieces and crosses are their Achilles Heel could be an understatement.

One fan’s advice is simple, and the players could do themselves a favour and take it on board “we have to challenge”, the benches comments are a little more damning “they can’t defend”. Considering the constant change in fortunes this game has already displayed one TM player is a little cautious “we haven’t won anything yet”.

The solo singer is solo no more, he has been joined by a fellow fan, the Sonny to his Cher the Lennon to his McCartney “come on Redbridge”.

The TM players caution about complacency is quickly justified when RFC get a third. One on one with the keeper, someone on the side lines offers his advice “lob him” as the pink clad keeper rushes out of goal. Ignoring this completely, he gives the keeper the eyes, sends him one way and rounds him with ease, rolling it in from a narrow angle. 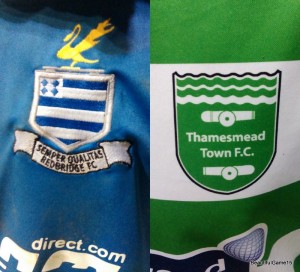 No celebration, just an instruction from the bench “get the ball” there are ten minutes left, and anything could happen, and it nearly does. A fourth for the home team seems a certainty only for a loss of footing from the man bearing down on goal “what a time to fall over” says one BR fan aghast.

Despite the late BR pressure and the clear TM time wasting “speed the game up ref” shouts a home fan, many of whom are sporting flat caps, and one puffs away on a vape cigar which has Tom intrigued, that fourth goal looks like it’s going to elude them.

Two last gasp chances present themselves, only for the TM keeper to pull off a couple of good saves, first from a header and secondly, outnumbered at the back two on one, he charges down the attacker.

The grounds stewards, in their yellow waist coats are huddled around the radio in Jeannette’s, by the sound of it listening to the final throws of the West Ham Vs Liverpool FA Cup replay.

“Well done boys” says a fan to a clearly dejected RFC, head’s are low as they come off. TM on the other hand are having a right good old sing song back in the changing room, must be tough to hear for RFC, salt in the wounds.

Adam is pragmatic post game “saw a good one, shame we were on the wrong side of it”

Back at the station, the music from the ground can still be heard, in fact crossing over the footbridge you get a grand view of the pitch, a tip for anyone too tight to shell out the £10 it costs to get in, which would be a bit harsh on RFC.

Although the club heavily rely on the function room and the five a side pitches for funds, gate receipts are pretty low, so depriving them of any would be a bit of a kick in the teeth. They are a club with a tumultuous recent past, and a proud history forged from the local car industry, they were known as Ford United until as recently as 2004.

They are just another team from a long list of non-league clubs, run by local committed volunteers, struggling from season to season and are well worth the admission fee.