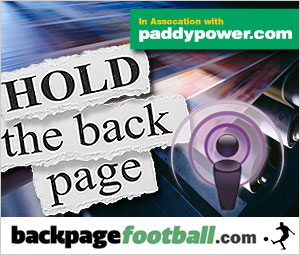 NO.12 – but no substitute for quality here. It’s a first choice selection, and first rate chat from the Hold the BackPage squad members…

There’s plenty for everyone, with international football, youth development, arguments over nationality and financ…I mean, some chat about Liverpool Football club.

The regulars, Ciarán Ó Raghallaigh and Neil Ahern talk through the disappointing return from Ireland’s two European Championship qualifiers against Russia and Slovakia – and just what options there are available to Giovanni Trapattoni – and whether he’ll use them.

Then we have an inside view of one of the potential recruits – QPR’s Hogan Ephraim. The Rangers attacker is being hailed for big things and we have ex-Ireland international Steve Gallen, head of Youth Development at QPR, to chat with us about the player – as well as other youngsters on the way to international football – as well as taking time to slag off his brother, Kevin Gallen.

We haven’t forgotten Liverpool play a bit of football, when they’re not in court, and Miguel Delaney of the Sunday Tribune is with us to chat about Sunday’s Merseyside Derby.

There’s the ever popular Tip/Off competition with Chris McWilliams from PaddyPower.com and we round things off with a look back on the most dramatic weekend of Airtricity League football in years as Shamrock Rovers and Bohemians battle for the LOI title.

Everton v Liverpool – Comment below with the winner, first goalscorer, the minute of the goal as well as the final score to be in with a chance to win this week’s competition.