June 2014. On a sun-hit Edinburgh afternoon, all too rare an occurrence in the Scottish meteorological calendar, Hibernian appointed their new manager after a woeful season.

The Easter Road men had just been consigned to relegation from the top-flight by a Hamilton side barely scraping an average home gate of 2000 spectators. But who could be the man to bring the sunshine back to Leith? Cue the arrival of Alan Stubbs, and his tactical swagger.

By all accounts this was a job unfit for even the most talented of managers. Hibs were a mess: board room and spectator discontent had been fuelled by years of underperformance. Relegation to the Championship saw the “Cabbage and Ribs” hit a new low.

Times were tough, and squad upheaval made them even tougher. Stubbs inherited a threadbare team of only eleven senior players. Everything was perfectly in place for yet another disaster. 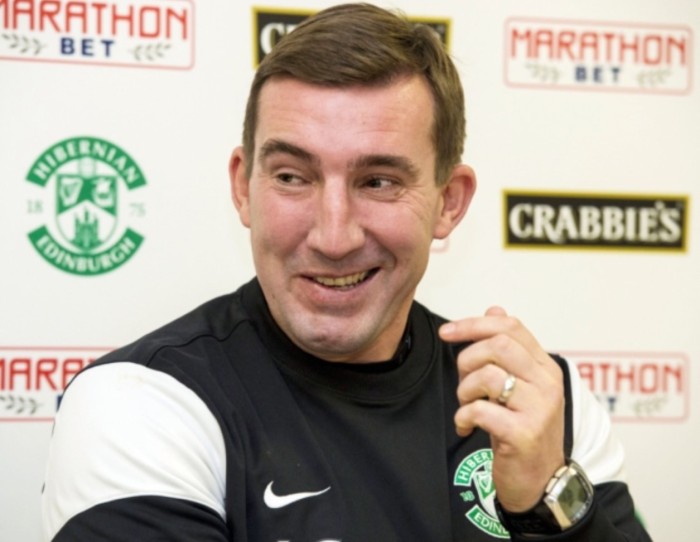 However, the Englishman has proven he is not just any old coach.

Humble and endearing, Stubbs has lived up to his impressive reputation. After an encouraging but stuttering start, things are looking up for the former Everton reserve team coach. His side are currently sitting second in the league and are unbeaten in eleven games in all competitions.

Comfortably sun-bathing in the play-off places seemed the stuff of dreams after the dismal fortunes of the 2013/14 season: that is exactly what “Stubbs’ Green and White Army” are doing at this moment in time. How times have changed for the capital side.

What has brought about this upturn in fortunes? Stubbs is the name and astute transfer dealings and intricate tactical planning is the name of the game. Maybe not the catchy link I envisaged before writing this. I digress. The point is, a rewiring of the Edinburgh club’s core beliefs and philosophies has taken place. It is what has been needed for so many long, hard and bitterly disappointing years.

David Gray, Liam Fontaine, Scott Allan. That is to name but a few of the Englishman’s shrewd signings in his short tenure to date. All have impressed. All have displayed fine technique and attitude. All were signed for less than a single penny.

And it is this selection of fine talents who have been so finely integrated into Stubbs’ tactical master plan. It is a plan which involves a very continental style of play indeed. With a narrow midfield diamond and full-backs seemingly living in the opposition half, the new man at the helm has adopted a style familiar to all of Europe’s elite, and his players are thriving for it.

The whole philosophy is based on utilising spaces around the pitch. Zonal marking is key. So too is a frontman willing to move and create angles for passes and chances for teammates alike. In Congolese maverick Dominique Malonga, Stubbs has found his perfect hit man.

Moving onto thirteen goals for the season with a double in a 3-0 win over Dumbarton last weekend, the skilful striker has added the firepower Hibs have been crying out for in recent times.

Despite the blossoming of a successful team, it has not all been plain sailing for the men from Edinburgh. Far from it.

Having drawn seven matches in the league against supposedly weaker sides, albeit two of those coming against Hearts, there certainly is marked room for improvement. Five losses on top of these does not provide easy reading for Stubbs; the real focus should be placed on the improvement rather than the (comparatively small) failures.

Nothing is simple in football these days. Whether navigating past a Barca or a Cowdenbeath, sophisticated tactical planning is required for a positive outcome.

Despite this, the huge challenge facing Alan Stubbs on accepting the vacant managerial post at Hibs has been taken on wholeheartedly and in a manner which has screamed simplicity and sheer enjoyment. Always a joke or a smile to be had for the man in charge, times seem rosy at Easter Road.

Come back to me in five years’ time, though. Then I can tell you the impact this one man really has had.