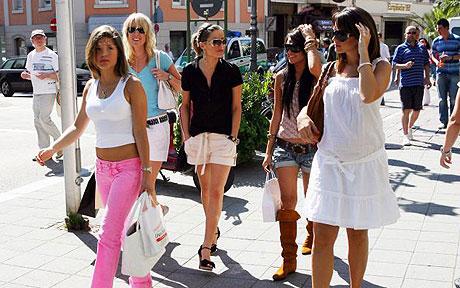 It didn’t take long for the wives and girlfriends to stamp their Jimmy Choos all over Fabio Capello’s no-WAG rule. Mrs Joe Cole, Carly, flew out to South Africa ahead of England’s do or die match against Slovenia on Wednesday along with Emile Heskey’s fiancée Chantelle Tagoe, Michael Carrick’s wife Lisa, and Matthew Upson’s girlfriend Ellie Darby. While Steven Gerrard’s missus Alex says she will be on the first plane over to South Africa if he needs her and Abbey Clancy, the girlfriend of striker Peter Crouch, jetting out in the next few days. Is the absence of the WAGs the reason England has been so lacklustre in Group C? Are they just simply missing the love of a good woman?

The flashy WAGs came under fire for the media frenzy they created in the last world cup especially when they went for a girls night out in the German town of Baden Baden.  Capello was having none of this in World Cup 2010 but after recent results maybe the WAGs weren’t to blame for England not winning the World Cup since 1966. Although there’s always an excuse when it comes to England underperforming in the World Cup. Perhaps this year, it’ll be the vuvuzelas..or just boredom. The England players claim they have had their fill of table tennis and are bored hanging around the hotel. They have urged Capello to allow them to see their wives and girlfriends, if reports are to be believed.

However, never underestimate a WAG; just because they were “banned” from cheering on their hubbies and boyfriends in the stands doesn’t mean they were not going to get their five minutes in the spotlight. A documentary that recently aired on BBC showed a group of WAGs, including Tagoe and Matthew Upson’s girlfriend Ellie Darby, and ex-WAGs, slumming it in the real South Africa. There we saw tears and a lot of “thanking God for what I’ve got back home” while they were caring for children infected by HIV. But this week, the England players’ wives and girlfriends came under fire, after it emerged that some will receive £9,000 worth of jewellery, clothes and holidays for attending a celebrity cocktail party in Pretoria on Friday. South African cosmetics company Optiphi said four England WAGs were expected to attend their promotional event, including Tagoe, Darby, and Michael Carrick’s wife Lisa. It’s easy to see why the WAGs are suddenly booking their flights to South Africa. Tagoe was also criticised for appearing in a promotional photo with South African children dripped in designer gear from head to toe.  One wonders if the girls who starred in the BBC documentary will return to the streets of South Africa and dismiss the luxuries of Sun City now that the cameras aren’t rolling.

But, queen of the WAGs Victoria Beckham is reported to be snubbing the rest of the wives and girlfriends in Sun City and is instead renting an apartment in Cape Town’s Camps Bay. Posh is distancing herself from the WAG parade this time round saying she doesn’t consider herself to be a WAG in the traditional sense (anymore). Or is it that she just does not need the publicity?

With England’s 1-0 victory on Wednesday and an overall improvement in play (although they were playing Slovenia), perhaps an influx of WAGs is just the tonic they needed.  Sure enough the paparazzi will be out in force stalking the WAGs who do make an appearance during the World Cup, undoubtedly trawling the designer stores of South Africa.

After all, they deserve it.