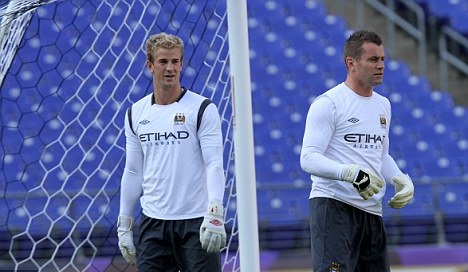 Effectively, it finished Shay Given’s career at the highest level.

Joe Hart, the flasher, more agile, media-backed 23-year-old replaced the Irishman at the beginning of the 2010-11 campaign.

It was a decision ‘forced’ on Roberto Mancini, with Hart having been on loan at Birmingham City when the Italian took over at the Etihad in 2009.

Media momentum had built behind Hart, then newly-capped with England, and even though Mancini had previously praised Given during a solid campaign in 2009-10, the decision seemed inevitable.

Confidence dropped and mistakes dogged the rest of Given’s career; the dream of winning titles, and playing Champions League football for the first time since 2003, was banished.

Given would play just four more games for Manchester City in 2010-11.

So, while Aston Villa kept the Irishman in the Premier League spotlight, within just one season, Brad Guzan usurped him as Villa’s number one.

Even in wearing the Irish number one jersey – which Given represented so admirably for 16 years – Given could not halt the slide in this period.

Sure, admittedly, it could be argued that Given’s greatest years – between 2002 and 2006 – were long behind him, but his decline was rapid and unforeseen.

After all, few would have doubted – even with the Hart setback – that Given would not have followed the likes of David James, Mark Schwarzer, Brad Friedel, and Jussi Jaaskelainen in playing at the highest level into their late ‘30s.

Yet, it did not work out – Given seemed unable to readjust to mid-table life and shakier foundations.

Joe Hart, ahead of the 2014 World Cup, faces an even more worrying future – amid Manuel Pellegrini ‘awarding’ him a rest.

Heralded as the world’s greatest goalkeeper after his stunning display against Borussia Dortmund in the Champions League in 2012, the Englishman is in danger of enduring an even sharper decline than his predecessor, Given.

Internationally, too, with Fraser Forster impressing in Europe, the pressure really is on Hart – unlike with Given’s ‘honorary’ position as Ireland’s goalkeeper between 1996 and 2012.

Could the fading glint in Hart’s eye – just like with Paul Robinson, Scott Carson and Robert Green previously – prove terminal?

This was the once cocky goalkeeper who taunted Andrea Pirlo by unfurling his tongue in the quarter-finals of Euro 2012.

At just 26, are Hart’s best days behind him – has the undoubted complacency of 2011-13 finally kicked in?

After all, Mancini even dropped his ‘cup ‘keeper’, Costel Pantilimon, to allow Hart to play in the 2013 FA Cup final – a game that City, incidentally, ended up losing.

Now Pantillimon – himself, an international with Romania, lest we forget – is in the driving seat after a clean sheet against Norwich.

Then, there is the fact that Manuel Pellegrini may yet fancy a move for Asmir Begović or Willy Caballero in January – with both goalkeepers not cup-tied for the Champions League.

Hart, somehow, must bounce back – and quickly.

Yet, given how Pellegrini backed him through mistakes against Cardiff, Aston Villa, and Bayern Munich, it may be too late.