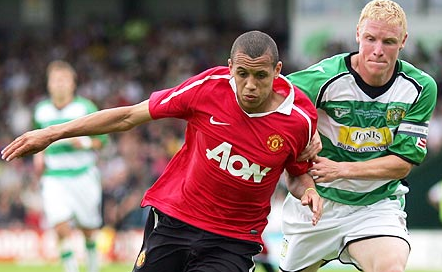 February 2nd is Ravel Morrison’s birthday and this year, it could mark the turning point in what has been a very checkered career so far. Tales of petty theft from team-mates at Manchester United’s Carrington training ground, through public social network bust-ups with Sir Alex Ferguson and ending up with a conviction for Witness Intimidation.

Clearly Ravel Morrison is troubled in his private life. As a result, Manchester United and Sir Alex have decided that they are no longer social workers and have offloaded him to West Ham for a bargain price.

Without knowing the history of Mr Morrison the deal looks to be amazing on paper. Indeed, if we were to look solely at Ravel’s ability on the pitch, it’s still very possibly one of the best bits of business done on Deadline Day.

Signed to the Manchester United academy at age 17, he is one of the brightest prospects from their youth system. His first-team appearances, though minimal in number, are outstanding in their quality. I saw him playing last year at Yeovil Town in a pre-season friendly and he was certainly a “jack-the-lad” character during the warm-ups, even playing with a dodgy Huish Park sprinkler to soak team-mates and the former youth manager Ole Gunnar Solskjaer. Nothing but harmless fun there, and when the whistle blew it was strictly business for the young midfielder.

His talent is obvious, and the comparisons to a young Paul Scholes are certainly justified. His playmaking ability is up there with the best in the Premier League and his attacking nous is where Solskjaer’s influence is most apparent.

However, like Jekyll and Hyde there is a darker side to this prodigious talent. Growing up in the Wythenshawe area of Manchester, Ravel Morrison has so far stayed close to his roots and inevitably his childhood friends. This may well have been his downfall, and its no stretch of the imagination to suggest that some of his friends and acquaintances have seized upon his talent and access to the seemingly glamourous lifestyle of professional football.

Morrison has been accused of stealing watches from the first-team dressing room, and it is definitely feasible that these watches may now be clamped around the wrists of some of Wythenshawe’s teenage residents.

Ravel Morrison’s arrival at the Boleyn Ground has perhaps overshadowed that of one of the Championship’s best strikers in Nicky Maynard. The intense scrutiny on Twitter and in numerous newspaper articles has possibly left Mr Maynard wondering if he was the most important person at West Ham.

Morrison will reportedly be staying at a four-star hotel in Central London initially, a bold move by Sam Allardyce and the two Davids; Gold and Sullivan. Perhaps this is a statement of the “respect” that Morrison clearly demands and feels he warrants, however if reports of trouble emerge then one can certainly see the player being put with a host family, or even with the manager himself.

Ravel himself has stated on Twitter, “…appreciate the people who have wished me luck with the move to west ham just need to get my head down and play now and show everyone what I can do”. If this is an honest statement, and not just transfer day fodder, then the future looks more bright for Ravel Morrison and West Ham.

West Ham themselves have a history of taking in waifs and troubled individuals, we only have to look back to Ian Bishop, Paolo Di Canio and Tomas Repka. However, Morrison is not just a tearaway on the pitch, he has “form” off it too, something very different to those former players.

He clearly needs a strong guiding hand from the club, the manager and to be removed from those influences that have caused him so much trouble in his past. The big question is, if a strong hand from Sir Alex Ferguson wasn’t enough, will a strong hand from Sam Allardyce be sufficient? I have no doubt that the club are well aware of the history of Morrison and I’m sure they are primed to do whatever necessary.

I hope too, that the fans have at least done their Youtube homework and seen some of the outstanding skills he’s shown in Youth appearances.  If they have, then they will certainly be excited about Ravel Morrison as a player and can’t wait for him to make his debut.

However, the biggest issue in the Man U/Morrison/West Ham tryst is of Morrison himself. This is a young man of considerable talent and obviously influenced by his friends and acquaintances in Manchester, however Manchester to East London is not quite Manchester to Australia in distance terms so there is always the worry of his influences making their way down the M6.

If Morrison can tame his behaviour and make a clean break from whatever or whoever was his problem in Manchester then I see him as being one of the best players for West Ham that they have seen in a decade. It is not often that Sir Alex Ferguson makes mistakes, and that is certainly the first hurdle that everyone in this saga will have to overcome, but this may well be the time that Ferguson has made a crucial error. Morrison’s contract is based around performance, so it is in his interest to perform well.

If he does, and West Ham are promoted in May, then next years return to Old Trafford for Ravel Morrison may be his moment to finally prove his doubters, and his former manager wrong. How many former Manchester United players can say they’ve done that?

James is a Sports Photographer who spends his life sitting in the cold and rain at the side of Football pitches. He is immensely jealous of journalists who sit in the warmth and dry with hot drinks. He wants to be one of them so is aiming to show that he can write as well as take pretty pictures.