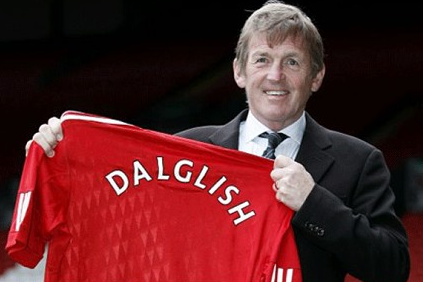 Barely a year has gone by since Kenny Dalglish returned to manage Liverpool Football Club. There were many armchair pundits (this one included) who opined on how much success would Dalglish bring to Anfield. I don’t think anyone though predicted that the man who previously represented the club and the city with such dignity would be partly responsible for a tarnishing of the Liverpool FC brand.

Of course, Luis Suarez is the main villain of the piece. The only two players to refuse to shake hands since the Premier League introduced this feature of the Respect campaign are a man who didn’t shake the hand of the person who slept with his wife and a man who refused to shake the hand of a player he was found guilty of racially abusing. Scoff all you like at Sepp Blatter’s suggestion that a handshake can solve the problems of racism, but if there was anyone who should have been allowed to feel uncomfortable about the gesture it was the United captain not Suarez.

It is fair to assume this is not the agreed media strategy – I’m sure somewhere in the corridors of Anfield a Press & PR Officer is pulling their hair out at the manager and star striker’s insistence on fighting a battle that’s already lost.

Leadership is badly lacking from Liverpool and Dalglish, his defiant attitudes following the original incident in October, the comprehensive report that found Suarez guilty and his subsequent public comments, including in his latest programme notes have kept fuelling an undeserved feeling on injustice on the red half of Merseyside. It has also given license to his player to feel that there will be no significant consequences of continuing to keep this grudge smouldering, despite Liverpool stating publicly that there would be a handshake prior to Saturday’s game.

Dalglish has accomplished are rare feat, in less than 13 months in charge he has united the vast majority of football fans squarely behind Sir Alex Ferguson. Fergie was spot on when he called Suarez a ‘disgrace’ and he was also spot on when he criticised Evra for the way he celebrated at the end of the game. Fergie probably cost Man Utd three points and maybe the title when he dropped Wayne Rooney against Blackburn for a much more minor indiscretion – what action will Liverpool take against Suarez? Sadly, I suspect the answer will be nothing.

They say never go back and sport is littered with examples of ill-advised comebacks. Bjorn Borg’s attempt to win tennis grand slams with a wooden racquet in the 1990’s; Mark Spitz’s desire to go to the Barcelona Olympics twenty years after he dominated Munich; and Michael Schumacher is still searching for a podium on his Formula 1 return. Football management is not bereft of examples for this cliche; think Graham Taylor’s second turn at Aston Villa, John Toshack’s final spell at Real Sociedad and Howard Kendall’s second and third goes at Goodison Park.

King Kenny is in my mind in danger of replicating the inglorious end to Sugar Ray Leonard’s otherwise imperious career. Undoubtedly Dalglish and Leonard were both superstars of their respective sports in their prime. Sugar Ray might have hung up his boxing gloves too soon when he retired for the first time in 1982 with 32 wins and only one avenged defeat, but he came back for one fight in 1984 and then for three classic encounters with Marvin Hagler, ‘Hitman’ Hearns and a third Roberto Duran bout in the late 80s, and he was still good enough to avoid defeat. But then he tried to come back in 1991 and lost and badly again in 1997, aged 41.

Everyone has their time and time catches up with even the greatest of sporting figures. If Liverpool can win the League Cup and get their first silverware in 6 years it would allow everyone to move on happy with the past 18 months and then hopefully Sir Kenny can enjoy his final retirement.

Update: This article was written on the weekend before the (welcome) intervention of NESV and the apologies from Suarez and Dalglish. I’m glad they apologised albeit not necessarily to Evra. The apologies while welcome do not materially alter the questions that I think this episode raised about judgement and if anything the acceptance of the need to apologise underlines the flawed judgement that both Dalglish and particularly Suarez exerted at first.

3 thoughts on “Happily Evra After”