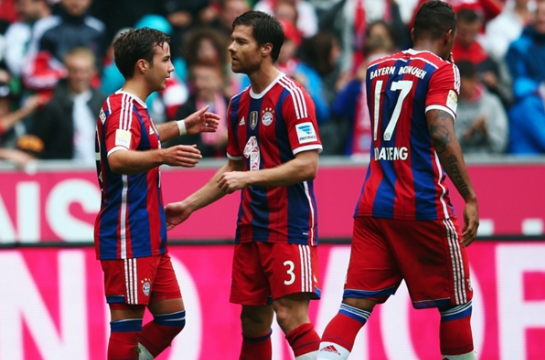 Pep Guardiola hasn’t faced a challenge quite like the one staring him now since becoming a manager. Following the unprecedented treble of Jupp Heynckes’ Bayern Munich was never going to be easy – even if you are the arguably the most talented tactician walking the planet – and now the man who masterminded Barcelona’s most fruitful years must dig deep in order to wow Bayern’s expectant following and bring the excitement back to the Allianz Arena.

Of course, troubled times can leave scars, and the wounds are still raw from the last time Bayern played in the Champions League, where they were humiliatingly dismantled and tortured by eventual champions Real Madrid. Guardiola must lead his team out on Wednesday night in the Allianz Arena knowing that nothing more than a convincing victory will do, despite the opposition being Premier League Champions Manchester City. Banishing the memories of Madrid’s superiority is a main priority and Guardiola’s first major assignment of the season.

One of the main reasons for Bayern’s hierarchy securing the services of Guardiola was the sense that he was the only manager who could keep the brilliance alive in the wake of Heynckes’ departure. They felt that only he could improve on the legacy and create his own dynasty to sustain the club’s period of success. However, so far it has been something of an anticlimax. Claiming the Bundesliga title in March at a canter was the earliest any team had ever won the league but the proceeding months left a bitter taste in the mouths of those who had tasted such sweet success for so long.

Domestic dominance proved to be a movable object but becoming the first team to successfully retain the Champions League in the modern era proved a step too far. And they weren’t even close. Their decimation at the hands of a ruthless Madrid was the darkest day in Guardiola’s management career and now he is out to prove it was merely an extraordinary blip rather than the beginning of a deeper crisis.

However, it is clear however on the evidence of Bayern’s season so far that it may not be the smoothest of recuperations. Dortmund caused more headaches by clinching the Supercup over their rivals 2-0 before Munich scraped past Wolfsburg 2-1 on the opening day of the league season. Since then Bayern have failed to really kick things into gear – failing to beat Schalke and putting in a sub-standard performance at the weekend over Stuttgart. League form is one thing but the fans will be expecting a swift and serene passage through to the knock-out phase of the Champions League to avenge the pain of five months ago and reassert their supremacy on the continent.

Interestingly, they have been drawn in a near identical group to 12 months ago. Manchester City will again provide the sternest of opponents, with CSKA Moscow also making a reappearance but Roma’s resurrection under Rudi Garcia suggest that the Italian’s will be a significantly tougher task than the Viktoria Plzen Bayern swatted aside last year. City occupy the closest thing Bayern will get to a rematch with Real Madrid at this early stage so attention will be drawn sharply on how they perform against a top-level side. The emphasis on winning in style increases the pressure on Guardiola’s side, who were accused of relaxing after sauntering to the Bundesliga title.

The three teams primed to face Bayern in Group E make up a reasonably difficult proposition on paper but internal problems are also denting the chances of success of Guardiola’s operation. Javi Martinez was central to the Catalan manager’s defensive plans before rupturing his cruciate ligaments in the defeat to Dortmund and the problems at the back have been exacerbated by Holger Badstuber’s torn hamstring during the weekend’s victory over Stuttgart.

On top of that, new signing Mehdi Benatia has yet to feature due to his own hamstring problems meaning that playing the 3-4-3 he envisioned may be beyond reach for Pep. Bastian Schweinsteiger and Thiago Alcantara are also on the injury list, both nursing knee problems which prompted the sudden acquisition of Xabi Alonso from Real Madrid. Alonso holds the key to releasing creativity through the middle. His performance was lauded against Stuttgart and it looks like he will be of vital importance to Bayern, much like he was to Madrid. Alonso will be looked upon to replace the fulcrum that was Toni Kroos and provide a much needed spark to his new club’s play. The 32-year-old no longer has international football to contend with so his energies can be purely focused on furthering Guardiola’s vision in Munich.

That vision, it seems, comes with stringent rules attached to it. A much-documented regime of strict discipline has been administered and put to the players for the new season, with stipulations including fines for overweight players, turning up late to training and ignoring dress codes. In addition to this, Guardiola publicly demonstrated that he will work his team as hard as he can in order to get the best out of them when he manhandled Thomas Müller during an open training session ahead of the new season. It is little steps like these that may prove beneficial when a test of the squad’s mental toughness comes their way. However, it is a double-edged sword. If Bayern crash and burn this season, Guardiola will be made to look like a crackpot dictator on the training ground who was asking too much of his players. If they succeed, he will be hailed as the genius with a scrupulous eye for detail that gave everything in a bid to win.

Since winning the championship in March, there is no doubt that Bayern have lacked a cutting edge and have sometimes appeared stale and bereft of ideas. After the hammering to Madrid, many started to turn on Guardiola’s much-lauded possession football. Madrid were quick and direct, operating with blistering speed through counter-attacks and many felt that was the direction Bayern should be heading in if they were to remain at the top and they certainly have the squad to do it. Guardiola’s tactics looked dated and overpowered against Madrid but the manager has not sacrificed his vision for the club due to one defeat. He believes in a style of football that he will continue to implement and develop to the best of his abilities, but it may prove to be a fatal wound in determining his long-term career at the German club.

The jury appeared to be out for Guardiola after the Madrid debacle when club legend Fran Beckenbauer exclaimed “possession is meaningless if you give chances away.” That was after the 1-0 first-leg defeat. When they were hammered at home in the return match, it would have been forgiveable to predict that Guardiola would be shown the door, given the cut-throat nature of modern football management. But the board stood by him. They reiterated their support and confidence, with Karl-Heinz Rummenigge stating that his faith had never wavered in Guardiola.

Now the man who brought fourteen trophies to the Camp Nou in four gloriously fecund years must ratify the support shown to him by knocking Madrid of their European throne and remind everyone why he is widely considered as the best in the business.