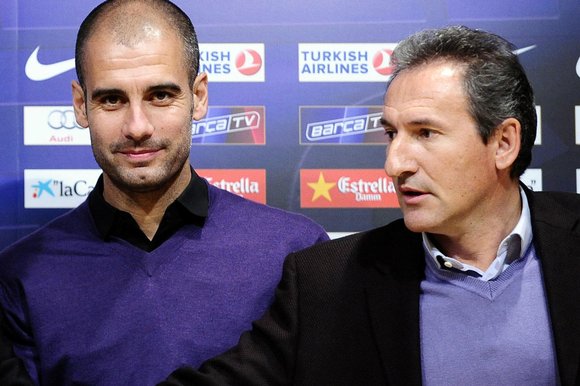 On 9 July, 2012, Roberto Mancini signed a new five-year deal – amid lucrative interest from the Russian national team and AS Monaco – just as John Terry’s racial abuse case began at Westminster Magistrates. On 17 August, on the day Mancini witnessed Manchester United officially prise Robin van Persie from his grasp, Ferran Soriano was appointed as the notorious Garry Cook’s replacement as Man City’s new chief executive. And, finally, on 28 October, City named Txiki Begiristain as their new director of football on a day where English football was littered with controversy over refereeing decisions, diving, crowd unrest, steward safety and potential racism.

Pathetic Fallacy, perhaps, and amid City’s failure to consistently match anything close to last season’s slick standards, the significance of the timing of the jigsaw Sheikh Mansour and Khaldoon Al Mubarek have pieced together is being realised. After all, despite the relationship between Mancini and Bryan Marwood, who is now City’s Academy director, having broke down some eighteen months ago over transfer funds, Mansour and Al Mubarek were extremely calculated and patient in their approach.

After all, ironically, in the outspoken Cook’s resignation on 9 September, 2011, Mancini lost his greatest boardroom ally and the man who so unethically invited Mancini to witness Mark Hughes’ curtain call against Sunderland on 12 December, 2009. Thus, it was no coincidence – particularly when Mancini was granted the last-minute panic signings of Richard Wright, Matija Nastasić, Maicon, Jack Rodwell, Javi Garcia, Scott Sinclair – that the Barcelona reshuffle has come during Mancini’s rockiest, most insecure patch since City were eight points behind Manchester United after the 1-0 defeat at Arsenal on 8 April, 2012.

Quantity, not quality, gripped Mancini’s requests and the failure to land Daniele De Rossi and van Persie on Marwood’s side – with the Englishman instead citing City’s eventual aim of meeting Financial Fairplay – left City excessively spending £52 million plus inflated wages: a sum not too far off what they could have originally paid to claim two world-class signings like de Rossi and van Persie.

Also, despite being unbeaten in the league, City’s patience seems to be wearing thin with Mancini – reflected in dressing-room dissent and supporters’ remarkable impatience (boos at half-time against Swansea on 27 October). As a result, the Italian’s attempts to solidify a dynasty in back-to-back titles and his crusade to develop numerous tactical, in-flux variants have already been undermined by his abject failure in Europe in back-to-back campaigns.

A long-running theme of Mancini’s managerial career, he has found the unpredictability of the Champions League difficult to juggle and it is telling that the Italian has rotated and tweaked in European games more-so than domestic fixtures. The trouble is, though, in taking on the Chelsea model in every respect (the £250 million youth Academy investment, the continental structure, the commercial partnerships and the lavish transfer budget), the same problems – particularly with City players gaining natural arrogance from winning a title – will surface when things do not go right. 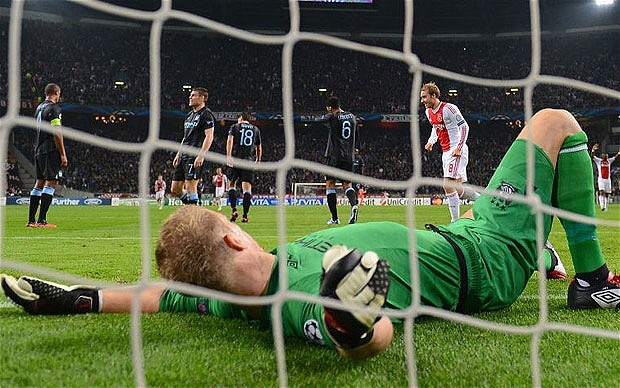 Undeniably, City have lost their rhythm and influential, rather than garrulous, dressing-room figures like Joe Hart, Micah Richards and Joleon Lescott have not shied away from their frank dissatisfaction with City’s flagging defensive standards. Along with the newly-arrived, inarticulate Angelo Gregucci’s failure to drill City’s defence effectively, this accentuates the fact that Mancini should have learnt the cut-throat values of European football from his time at Internazionale and, of course, from City’s terrible European campaign last year.

However, his eccentric tactical indecision, stubbornness and failure to center winning European games on City keeping possession has meant that, yet again, the Italian will cite a ‘group of death’ despite the fact that City should not be performing so inferiorly to how they did against Borussia Dortmund on 3 October and Ajax on 24 October respectively.

The question now is – with City unlikely to progress into the second-round – whether Mansour will dare to sever the remaining four-years of Mancini’s £7 million annual contract if City fail to win the 2012/2013 league title. Given his unceremonious disposing of Hughes in December, 2009, little suggests that taking a 0.0016% hit in his still-prospering individual £17 billion fortune will deeply trouble Mansour.

However, while Mancini’s logical, eventual replacement had seemed José Mourinho – given the Portuguese’s plans to return to England and his success in building on Mancini’s foundations with Inter from 2008/2009 –  the Special One detests the hyper-active director of football structure that Begiristain is likely to embody. From Avram Grant to Jorge Valdano, Mourinho cannot stand needless distractions, diversions and overhead meddling and having already been left burnt by Begiristain and Soriano previously – when the then Barcelona officials feared Mourinho would tatter the club’s proud image and philosophy when he was interviewed for the vacant manager’s job in 2008, as Graham Hunter outlines in Barca – Mourinho is unlikely to be approached or, regardless, be interested in leaving Madrid quite yet.

Unsurprisingly, that leaves Guardiola as an enticing prospect, with City, consciously since 2009, aiming to re-create the perfect environment to progress from the lavish Chelsea model into something more sustainable: the Barcelona blueprint. With newly-established, state of the art youth facilities and an already decent history of honing ball-playing youth talents since their original Academy opened in 1998 – with the likes of Shaun Wright-Phillips, Glenn Whelan, Joey Barton, Daniel Sturridge, Stephen Ireland and Vladimir Weiss all graduating – City are looking at cherry-picking the best Spanish teenage talents for their future first-team.

With Guardiola, Begiristain and Soriano all in tow – and Esteve Calzada, Barcelona’s former managing director an imminent arrival – it would seem a progressive move, but, unsurprisingly, taking a winning structure from one environment and planting it into a more competitive foreign league is unlikely to be a seamless process. So, even if Guardiola is likely to relish a similar expenditure opportunity to the one he had at Barcelona, the Catalan was, without exaggeration, still deeply-aged by the stress of maintaining Barcelona’s success in tandem with their Mes Que Un Club philosophy.

Frank Arnesen (from Tottenham to Chelsea and Hamburg), Damien Commoli (from Tottenham to Saint-Etienne and Liverpool) and Gianluca Nani (from Brescia to West Ham) all sound serious warnings, too, about City’s new glamorous structure – even if they do not eventually turn to Guardiola – and while Mancini appears weary, focusing on, and winning, a single league competition may yet save him again. Just.