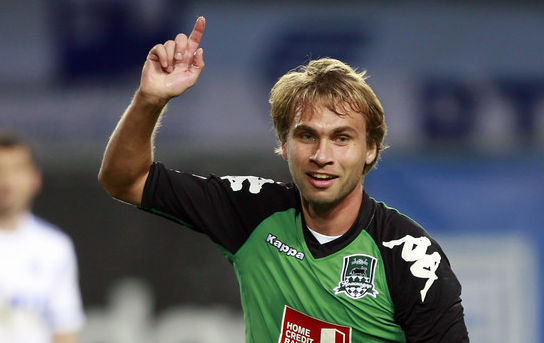 A couple of weeks back I asked the question whether or not local players could move abroad and prosper. Certainly many points in the criteria go severely against Russian players, not just visa requirements. A lack of development from youth football up, poor self-confidence, lack of physicality and most importantly a desire to improve as a player. When you can live like a King playing for a Second Division side in Siberia, why go to a tougher league in a small European country where you have to scrap for every ball and have to push yourself to the limit.

However there are exceptions to every rule and there are some players (after conversations with agents and club officials here and personal observations) who could not just make it abroad but are on the radar of foreign clubs. Here are five of the best bets and most likely to succeed, if they make the step.

Zenit’s Aleksandr Bukharov is entering the last year of a contract that, if he is doing things right, will be used to rediscover his old form and get a move abroad. A player who deserves more than 2 caps for the national team could head back to Rubin and hopefully not (as rumoured) to Tom Tomsk. Outside of Russia he would be an ideal addition to some of the mid-table German sides as with his size and skills, he would be excellent leading the line.

Watching him four years ago I’d have bet money that Viktor Vasin would be a Premier League star by now, yet the 24 year old’s career has stalled behind more experienced players at CSKA. Big, strong and steady he won a cap for the national team in 2010 and yet he will probably endure another season in the wings playing cup games and backing up senior players. Like Bukharov he has a year left at CSKA and as yet there have been few stirs around him, though a possible move to Spain has been rumoured with Osasuna interested in taking him on a loan to buy deal, though if Vasin is to play again for Russia, he has to get game time, and quickly.

Having missed out the first 10 matches of last season, Evgeni Shipitsin turned out in 18 of the last 28 and bagged five goals from midfield. A well travelled player from the Urals hothouse of Perm he was a canny catch for Sergei Galitsky’s FC Krasnodar. With two more years on his contract he can leave the club aged 30 with the satisfaction of a job well done, or he can follow up on the interest of Granada in Spain or of two Serie A clubs who have all taken a look at this skilful and influential player. A move to a bigger club in Russia cannot be ruled out, though few would appreciate and utilise his talents enough.

Dmitriy Kombarov will be out of contract in a year and as things stand will not be winning much soon at Spartak. There were rumours that he’d leave for one of the bigger Russian clubs, like Anzhi, CSKA or Zenit, though that looks very unlikely. Maturing nicely under Fabio Capello he has come on the radar of Premier clubs in England and at 26 could, if he works hard, make the transition into a very good player in England. Physically tough Wigan and Swansea took a look at him last season, with some ambition he could make an impact a little closer to London if his rep’s are to be believed.

The fifth player deserving a real mention and one who has every chance of getting to a higher level is Rizvan Utsiev. A tidy, tough midfielder he has been long enough at Terek Grozny to justify a move abroad. His one deficit is bagging goals, though everything else he does is professional and consistent. Should he catch the reckoned move to Spain (Bilbao and Villareal), Germany (Eintracht Frankfurt, Augsburg and Hoffenheim) or clubs from Holland, France or Portugal, he will break free of the bias against Terek players joining the national team. Highly rated by club head honcho Ramzan Kadyrov, it will be difficult to get a move short of three million euros, though anyone who brings him in will have gotten a very capable player who can run the midfield.

The telling point will come in November as to whether or not the above players have the will, courage and self-belief to further their careers. In the case of Kombarov his family will decide, though if just one of them goes, it could be the perfect springboard for other talents after the disappointment of Arshavin and his spoiled mob.