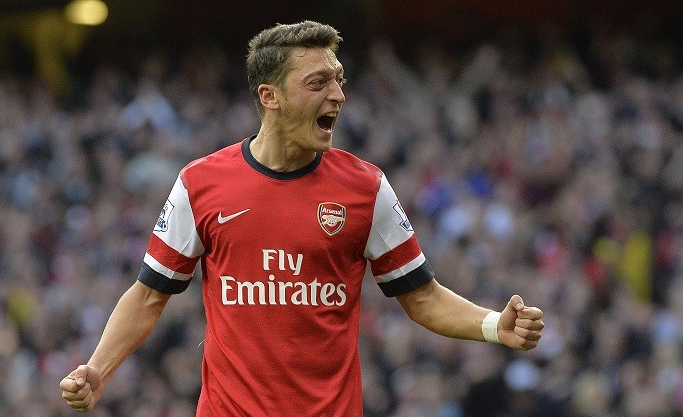 Writing a critique of Mesut Ozil’s first six months at Arsenal seems like an exercise in futility. The masses, it seems, have already made up their minds, one way or the other.

Unfortunately this seems to be the norm for most ardent followers of the Premier League; the tribal lines between fans are drawn that much sharper and it lends itself to just two possible conclusions over Ozil.

One, he is God’s gift to mankind and two, he is the most overrated player since Simon Rolfes topped the Kicker rankings as best German midfielder during one fine Ruckrunde not long ago.

As always, the truth lies somewhere very much in the middle, and having been in the enviable position of watching almost every game Ozil has played in the last four years, I decided to close my eyes and take the plunge – empty swimming pool and all.

So here is the truth, or at least my version of it.

Ozil is an exceptional footballer, the kind of player that does not come around too often. He is a player whose ephemeral qualities, whose vision, whose passing, whose intelligence and whose blatant unselfishness comes across as a breath of fresh air in a sport dominated by alpha males. In short, a kind of player any team should aim to have.

The best description of Ozil comes from a man who knows him and football fairly well. “Ozil is unique,” said Jose Mourinho once. “There is no copy of him,” continued the Special One. “Not even a bad copy.”

And that indeed is the truth.

It is fairly difficult to pigeonhole Ozil into any category of footballer playing at present because he is a pure playmaker, the kind of player who basically went out of fashion nearly a decade ago in a hail of headbutts and red cards. Ozil is not a speed dribbler with phenomenal balance like Eden Hazard, he possesses none of Ronaldo’s sheer brutality nor any of Lionel Messi’s single-minded directness. He is not even like Juan Mata.

In truth, the only reason a player like Ozil survives in the hectic nature of the modern game is his vastly underrated foot speed. In fact, for me, the most apt description of Ozil has always been this – he is like a Juan Riquelme on skates. A player content to get by exploiting his superior understanding of space and relying on his speed to get him into positions his brain says he should occupy. Ozil embodies simplistic brilliance.

That said, it brings us to the more pertinent question. How good has Mesut Ozil really been for Arsenal? And for me the answer to that is simple — not very good at all. But there is a little caveat here. It’s not as if Ozil’s form has tailed off remarkably of late. In truth, Ozil was nowhere near as good as people were making him out to be in the first few months and in truth he is nowhere near as bad as people are making him out to be at currently.

Part of this has definitely been his need to adjust to the greater physicality of the Premier League, but part of it has also been (whisper it) the way Arsenal play their football. It seemed a foregone conclusion that Ozil would take to Arsenal’s style like a duck to water but that has not been the case at all. In fact, at Arsenal Ozil faces a challenge similar to which he faced with Germany in the Euros in 2012 – play with a player that his style is hardly compatible with. In the Euros this was Mario Gomez. At Arsenal this is Oliver Giroud.

This is not an attempt to take a sly dig at either of Gomez or Giroud. Both are accomplished footballers, but they are exactly the kind of players that Ozil struggles to play with because of his own unique style. Ozil is at his best playing with forwards who like to play either on the shoulder of last defender and run the channels, or intelligent forwards whose technique means they can drop down and link with him in midfield.

At Real Madrid, Ozil enjoyed great success playing with both Gonzalo Higuain who embodies the former and Karim Benzema who embodies the latter. Even for Germany, Ozil’s greatest success comes by playing with a forward like Miroslav Klose, a player not averse to dropping deep to link plays. Additionally, for both Real Madrid and Germany, Ozil always had a player willing to exploit the forward’s running back to fill that slot.At Real, this was most often Ronaldo and for Germany this is most often Thomas Muller.

Even further back at Bremen when Thomas Schaaf still played a diamond in midfield, Ozil was linking with Claudio Pizarro – a forward as intelligent as they come both with his back to goal and in his linkup play.

At Arsenal though, Giroud offers exactly the kind of option that Ozil struggles to play with. The Frenchman is good with his back to goal, meaning the player behind him often has the opportunity to exploit the space behind the striker to either break beyond the defence or use the striker as a rebound option to strike at goal. Unfortunately, both of these are options Ozil is not very comfortable with, but say a player like Toni Kroos or Frank Lampard would probably thrive in. But with Arsenal lacking too many forward options, and most managers knowing Arsenal’s style, teams have found a simple way to defend against them.

Giroud is not blessed with pace so center-backs are comfortable pushing up the pitch to squeeze the space that the midfield has to operate in. They are comfortable knowing that even if they do step up, there is no player like Theo Walcott to run beyond them and whose pace and directness can catch them off guard. This often means Ozil find himself coming deeper for possession and seeing his passes have much less of an impact. This also means Arsenal have been far less fluid this season then they have been in previous years, especially in their attacking play.

There are problems too with the back of Arsenal’s midfield which often means that circulation of the ball from back to front is often not quick enough. Not without reason has Mikel Arteta never received a Spain cap.

All this should not be seen as a means to defend Ozil’s contribution. Indeed it is by nature an effort to explain his impact to rational supporters who don’t somehow crow about how he supposedly goes missing in big games or how he apparently lacks commitment. You could try explaining to this large group his record against Barcelona in the last few years or tell them how he generally covers more ground than Oliver Giroud every game, but for some no explanation will suffice.

Others though will realize that Ozil is a truly exceptional talent whose natural ability and skill has the potential to light up the Premier League. The onus is on Arsenal and Arsene Wenger to find the right combination to do this. And if they do, that elusive Premier League crown may not be that far in the distance.