A few weeks ago, my dad ascended to my parents’ storage room in the attic, as he does every year in early December. Half an hour later, a perfectly shaped Christmas tree had arisen in their living room. It wasn’t the best ever looking Christmas tree and everyone giving it more than just a quick glance could easily see it was fake.

For my parents though, it’s more than good enough. They don’t see seasonal decoration as a necessity and for them it’s definitely not worth having to drag a hefty and expensive tree all the way to their house on a yearly basis, just to end up with needles all over the living room floor. They switched to plastic about ten years ago and haven’t regretted it for a moment.

About a year ago, Dutch Eredivisie side ADO Den Haag did the same. They replaced their very expensive, high maintenance natural green with plastic, following about the same practical reasoning as my parents. This season, the Dutch top flight of football features six home grounds with artificial turf, this number being even twice as high one division lower.

I myself, playing a few handfuls of divisions lower, play on artificial turf on an almost weekly basis, dreading the away games where I have to play on what is supposed to be real grass, ones that can be used for indoor dog grass. In recent years, a few clubs who play their home games on artificial turf are explicitly entering the race for European qualification, fuelling the discussion on the effects of playing surfaces.

The fact that FIFA has announced to have one of the next World Cups for men being played in a desert and to have the women switch to artificial turf altogether for their next World Cup didn’t quite temper this. I believe the switch to reliable, artificial turf is inevitable, especially for lower league clubs and countries with a difficult climate.
Sourced: www.artificialgrassliquidators.com/artificial-grass-cost/

How poor is too poor?

I can remember the Saturday mornings about twenty years ago, where after a night of bad weather, I was sent back home disappointed because the pitch was in too bad a shape to play on. During the winter months this could add up to four or five weeks of postponed matches.

Nowadays, the number of disappointing messages might add up to two a year, with a lot of bad luck that is. The grass pitches on which I have to play as an amateur though, usually have to endure about five matches on a weekly basis on top of a number of trainings, two months of sub-zero temperatures and maintenance by a well-meaning volunteer. I don’t think I have to describe the state these pitches might be in come the end of the season. 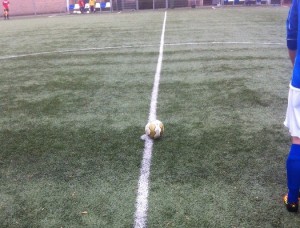 In Dutch football, poor pitches unfortunately were rife, throughout the divisions. With yearly budgets of just a couple of million Euros, most Dutch professional clubs simply can’t afford to spend a lot of money solely on their playing surface.

With a one-time investment, you’re guaranteed to have a perfect pitch for seasons to come. This also enhances the flexibility of the stadium usage for clubs, something with a direct influence on revenue.

The fact that they switched to artificial turf enabled ADO Den Haag to host the World Cup Field Hockey last summer. With the added option of renting out their stadiums for concerts and other events, clubs might not only save money on their switch to plastic, it could even make money for them. Money well-spent in other areas of a football club.

For the bigger clubs though, money might not be the problem or the main point of consideration. They just want a perfect green pitch. Or do they? Last April, FC Barcelona complained to UEFA over the length of the grass at Atlético’s Vicente Calderón, which would excessively hinder their playing style.

A full switch to plastic would get rid of both these problems, making it very difficult to manipulate your pitch based on the next opponent, as well as nullifying the advantage of teams with different playing surfaces.

And then there’s always the possibility of what insurance companies would call an act of God. Even the best pitches can get waterlogged. Just a couple of weeks ago, the PSV Eindhoven’s Europa League away game at Estoril was postponed to the next day at half time, after heavy rainfall.

As a result, PSV’s match against Feyenoord which was scheduled for the following Sunday had to be rescheduled. And where fellow title chasers Ajax last two points that weekend after their European commitments, remarkably on ADO’s artificial turf, PSV won their postponed match against Feyenoord on a Wednesday night two weeks later.

This was just a Europa League group game of course, who cares? But what if this had been a Champions League final? Multi-million sponsor deals for a Saturday night of football, for what is usually one of the most important and best-viewed matches of the season, would be heavily jeopardised.

Would a referee still reject a pitch with such enormous interests unrelated to the game itself? Or would we be left with a match of water polo, deeming the sponsor deals with Gazprom and Ford above the entertainment for fans across the globe?

The main arguments against artificial grass seem to be solely emotional. Football just is supposed to be played on real grass and your shorts and shirts should be stained and green after a good match. Essentially the same arguments that are and will be used in any debate about any technological improvement or change within the beautiful game.

The world of football continues to be a highly conservative environment and it seems the only thing that can cause a significant turn in those conservative believes is a major incident. To break the deadlock, this discussion needs a Frank Lampard-moment, an occasion where the vast majority of fans will agree that the romantic current state of affairs can be too much of a coin flip when sportive and commercial interests keep expanding rapidly.

The only remaining question: who will be the perpetrator behind that incident? The weather gods or FIFA?