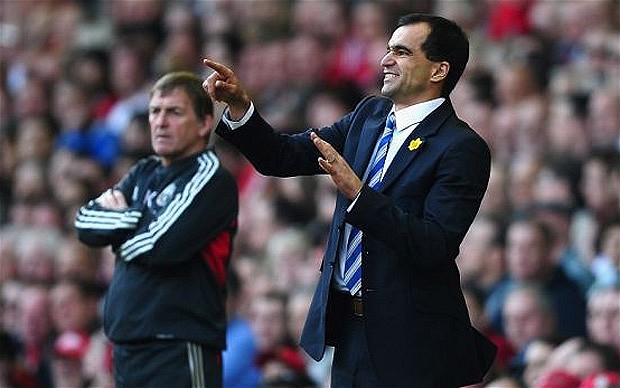 Having turned down the advances of Liverpool and Aston Villa in previous seasons Roberto Martinez finally took the plunge to take up the reigns at Everton after David Moyes departure. Some may argue his task of continuing the work of Moyes is as unenviable as the task the Scot has of emulating Alex Ferguson at Manchester United. But is Martinez the right choice and is he suitably qualified for a top five job?

In 1995 Martinez arrived in England on the crest of a Spanish wave. Along with fellow countrymen Isidro Diaz and Jesus Seba the threesome signed for Wigan Athletic at the beginning of the Dave Whelan revolution. Collectively known as the ‘Three Amigos’ the trio added some flamboyance to unfashionable Wigan. This was Wigan in Division Three don’t forget not the one who were recently rubbing shoulders with Chelsea and Manchester City. In his first season Martinez finished top scorer and won player of the year before securing promotion the following year. Two appearances in the PFA team of the season and a Football League Trophy winner’s medal rounded off a successful association with the Latics. His modest playing career saw him move on to play for the likes of Motherwell, Walsall, Swansea City and Chester City. Although an extremely competent midfielder nothing suggested the emergence of the sought after manager he was to become.

Martinez first managerial appointment was back at Swansea City replacing Kenny Jackett who had ironically released him on a free transfer less than 12 months earlier. As a player Martinez had captained the side and played in the team that secured Swansea’s league status on the final day of the season. Now with the new surroundings of the state of the art Liberty Stadium replacing the run down Vetch Field he was familiar with Martinez learnt the art of management quickly and after narrowly missing out on the Play Offs in the year of his appointment he led the Swans to the League One Title breaking records along the way. Among his personal honours was the manager of the year award and not even a penalty shootout defeat in the Football Trophy final could spoil a remarkable full debut season in management. Swansea had gone from losing their football league status and possible extinction to the Championship in just over five years. Martinez had laid the foundations for the legacy which has been carried on by Brendan Rogers and Michael Laudrup in recent seasons.

Following a sole season in the Championship where the Swan’s missed out on the play offs by a solitary point Martinez took up the reigns at the now Premiership Wigan Athletic where he had enjoyed so much success as a player. As with his previous managerial post it was a much different environment to what he was used to with the debilitated Springfield Park being left for the new contemporary DW Stadium. What would soon become an iconic relationship with his chairman Dave Whelan was to begin, but not before controversy as Swansea fans felt he had assured them his future was at the Liberty Stadium. With the lure of Premier League management too much to turn down Martinez felt he had served his apprenticeship and with a generous degree of success, so left Swansea with no regrets.

As with his playing career it was at Wigan that Martinez really came into his own. Although he enjoyed limited success he built a reputation as astute tactician with an eye for the right player. Along with his likeable character and aforementioned relationship, which seemed to go beyond boss and employee with his chairman, the Wigan faithful took to him as one of their own. The faith they instilled in him despite seasons narrowly avoiding the drop was refreshing to see at this level. Becoming famous for their end of season Houdini escape acts the fans rarely panicked or lost faith in their leader. Their season began in March after all! Martinez famously stated that “As a football club we win the title every time we stay in the league”. Not only did he set the supporters expectations with that statement but also set a target which was achievable for him and his staff. To compare it to winning a title was a masterstroke in getting the Wigan supporters onside and believing in what they were trying to achieve.

One of the most significant wins under his stewardship was against champions Manchester United at the DW in 2012. Sean Maloney’s solitary strike deciding the game which ultimately prevented United from stopping their rivals City winning their first Premier League crown and at the same time all but sealing Wigan’s safety. Unfortunately for Martinez after three seasons of dramatically avoiding relegation their luck ran out in 2013 when they were finally relegated following a disappointing 4-1 defeat to Arsenal at the Emirates Stadium. Played only days after an energy sapping FA Cup Final at Wembley against the millionaire’s of Manchester City, you could see the Wigan players were running on empty. Rather ironic that their 1-0 triumph which saw them crowned FA Cup winners following an amazing journey to the final was soured by finally succumbing to the drop out of the big league.

Aston Villa and Liverpool came knocking for Martinez services during his Wigan tenure. Dave Whelan allowing permission for them to speak to his charismatic leader with the air of a man who knew his most prized asset was going nowhere. Such was the mutual respect between the pair Martinez stayed loyal to Wigan, even signing a new contract after talks with Villa were unable to prize him away. Whelan stated he ‘would never sack’ Martinez who in turned revealed he turned down Liverpool cause his chairman was ‘unique’. It seemed there was no-one who could steal him away.

When he eventually left for Goodison Park it was like watching the breakup of two national sweethearts and there was still not a shred of animosity as Whelan claimed Everton were ‘too small’ for Martinez and he was ‘capable of a bigger job’. Big enough or not it seems the next logical step in Martinez management education. Although leaving Wigan with a heavy heart he had delivered their first ever trophy and such was his nature left with his reputation unharmed despite finally suffering relegation.

It’s fair to say Martinez arrival at Everton has been met with mixed emotions from the bluenose faithful. Was his CV impressive enough to takeover at a club who had just enjoyed a 5th place finish the previous season? Many believed a man who spent most of his career in the lower leagues or lower reaches of the Premier League was not qualified to take over from David Moyes despite the FA Cup win he had achieved. No management experience in Europe was another criticism levelled at him especially as the club are about to embark on their first Europa League campaign for three years. To counter that though an eye for the right player in the right situation is one of his strengths along with his attractive playing style. Playing football the correct way is what Martinez is about and it’s this that which goes a long way towards winning over supporters and critics alike. If that also breeds success then there he was his winning formula.

Being used to operating on a tight budget when it comes to bringing in players, things will be familiar to Martinez in that department at Everton. Of course a higher calibre of player will be within his restrictions, but Everton financially at least are well behind the likes of Arsenal and Spurs who will be vying alongside them for that 4th spot. It’s here his knack for bringing in players from the lower end of the market will serve him well.

Martinez first dealing in the transfer market was to sign three ex-Wigan players. Goalkeeper Joel Robles (£3m), defender Antolin Alcaraz (free) and forward Arouna Kone (£6m) have all followed their former boss to Merseyside. Whether this is just the start of essembling a Wigan version 2 or picking the crop of his previous clubs players remains to be seen. Everton fans are no doubt sceptical at this stage as no matter the quality the players brought in so far they will have the stigma of being part of a relegated side attached to them until they produce the goods.

Analysing those who have come in Joel could yet prove to be a shrewd signing. Last season he kept Ali Al-Habsi from the number one shirt including the famous FA Cup final victory. No mean feat as Al-Habsi was one of the form keepers in the Premier League while at Wigan. He could provide some much needed competition for Tim Howard between the sticks. Alcaraz arrives with European and international experience. The Paraguayan could form a useful partnership at the back with current Everton captain Phil Jagielka. Kone’s move could raise a few more eyebrows due to the fee paid, but 11 goals in a struggling side prove he knows where the net is. Often criticised for lack of a consistent striker he could provide some much needed fire power. One thing Martinez will need to change is the previous mentality of survival being an achievement with Champions League qualification now the goal.

Possibly the biggest challenge Martinez will face is keeping the existing stars who did so well under David Moyes at the club. Naturally Manchester United have already been linked with full back Leighton Baines as Moyes follows Martinez lead in going back to his old club to try and tempt away the pick of the crop. With Everton so far resisting the approach and United yet to return with a bigger offer the likes of Marouane Fellaini and Phil Jagielka are sure to be linked with a move somewhere before the end of the transfer window. These players will need to stay at the club if there is any chance of them going one better than last season.

One thing that is for sure is that whatever transfer activity takes place over the coming weeks observing the fortunes of Everton’s existing and former manager this term will be interesting to say the least. Only then will we know if Martinez was the right man for the job.

Leyton Orient fan and general football enthusiast. Always have an opinion although not always right!