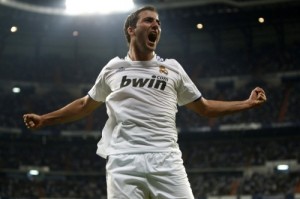 When Gonzalo Gerardo Higuaín last took to the pitch for Real Madrid they had qualified from their UEFA Champions League Group at a canter, were sitting pretty at the top of the league with 32 points from a possible 36 and going into El Clásico with high hopes of exacting a measure of revenge upon Barcelona, having not beaten them in the league in the last four attempts. Higuaín had been in rude form up until then, with 10 goals and 3 assists in 18 appearances.

A look at the table now however paints an altogether grimmer image for any Madridista out there. 23 points from a possible 30 since Higuaín played his last game, including a 5-0 routing by Barcelona and a 1-0 loss to lowly Osasuna sees Madrid seven points off the pace set by the league leaders from the Camp Nou.

Taking upwards of 75% of available points without your main striker and top goalscorer of the previous season may be enough at any other football club, however in Real Madrid, even the slightest slip up or perceived mistake is seized upon by fanatical fans, a cut throat regional newspaper and what surely must be the most impatient Board in world football.

Manager José Mourinho’s obvious reluctance to play Karim Benzema in Higuaín’s place has not made things any easier for the club and has led to many Los Blancos fans counting down the days until the Argentinians return from injury. The arrival of Togo and Manchester City frontman Emmanuel Adebayor on loan for the rest of the season should help ease the burden of expectancy placed on the shoulders of Cristiano Ronaldo, Ángel Di María and Mezut Ozil to not only produce, but to finish off moves too.

When he pulled up with a back injury in the 77th minute of Real Madrids league game against Athletic Bilbao on November 20th of last year it was predicted that Higuaín would miss Madrid’s midweek Champions League tie with Ajax Amsterdam and would be questionable for the clash with Barcelona the following weekend. He did indeed make the bench for the 5-0 drubbing at the hands of the Catalans but was not fit enough to take any part in the game. When it became apparent that the injury was showing no signs of going away the Madrid medical staff examined it closer and it was discovered than Higuaín had a herniated (slipped) disc in his lower back.

Soon it became clear that the injury was not getting any better, despite Madrid’s team doctor, Enric Cáceres, insisting that the Argentinian hitman would not require surgery to resolve the issue. This theory was completely blown out of the water when Higuaín returned home towards the end of December and was examined by the national team doctor who diagnosed that Higuaín would need surgery immediately. Coach José Mourinho was understandably frustrated at the misdiagnosis by Cáceres and released a scathing attack on the Madrid medical staff in the press.

On January 11th 2011 Higuaín was operated on in Chicago with no complications. Upon discharge it was predicted that it would be an estimated four months before he would be fit to return to playing again, which would essentially rule him out for the remainder of the season.

Mourinho’s frustration was and still is understandable. The Special One is known to build his team in a tailored way to suit his best players. Higuaín, who occupies the lone forward position in Mourinho’s favoured starting eleven, is a vital part of how Madrid play. Losing him to injury is bad enough, but losing him to injury for longer than was necessary because of a botched diagnosis was always going to rankle with José.

Playing the lone forward role in Mourinho’s preferred 4-2-3-1 formation means there is a lot of responsibility thrust upon the young South Americans shoulders. It demands good attacking play and clinical finishing, but also a willingness to never stop running up front, constantly hustling defenders and not giving them a time and space to relax and pick a pass. Higuaín has all the attributes to perform this role perfectly. A powerfully built six foot frame means it is very hard for defenders to push him off the ball combined with a decent turn of pace makes him the perfect player to plough a lone furrow up front.

When Higuaín plays well, Madrid play well. He gives them a good attacking outlet up front that can hold play up and bring the plethora of talented attacking midfielders Madrid have at their disposal into the game. He is not without his detractors though; one area of his game which is criticised widely is his finishing. Many believe that he is not clinical enough to play for Real Madrid, that he panics in the penalty area when he should be composed, one infamous example being a ‘sitter’ he missed against Lyon in the KO16 round of last season’s Champions League. If this were true though, would he really have been able to keep players such as Diego Milito, who scored both goals in Inter Milans victory over Bayern Munich in the UEFA Champions League Final, Carlos Tevez and Sergio ‘Kun’ Agüero on the bench during the 2010 World Cup?

While it may be the case that he could improve on his finishing, 74 goals in 159 appearances for Los Blancos is an impressive record for someone that the Marca newspaper has crucified in the past for not scoring enough goals. It’s important to remember that he is still only 23 and if he continues to develop he will surely be recognised as one of the top strikers in the world over the next few years.

3 thoughts on “Gonzalo Higuaín – The most important part of the Madrid puzzle?”