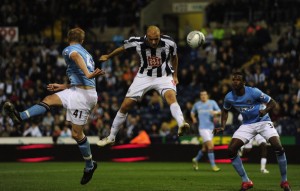 It was another exciting night in the Carling Cup, though not if you are fan of Chelsea, Liverpool or Manchester City as fans of the trio were left scratching their heads at their respective results.

Usually when Chelsea race into a 3-1 lead it’s a pretty safe bet that they will comfortably see out the game for a handy win. Not tonight however as a spirited comeback from Newcastle United culminated in a late winner from Shola Ameobi.

It was by no means a hugely weakened line up for the Blues at Stamford Bridge with John Terry making his return to the starting eleven. Nicolas Anelka, Yossi Benayoun, Paolo Ferreira, Daniel Sturridge, Ramires and Yuri Zhirkov also started against a Newcastle side that had rested a large amount of their regular line up. Chelsea will point to the fact that injuries forced them to play the majority of the second half with just ten men but the result is still a shock of high proportions.

Also exiting the competition early are those big spenders from Eastlands, Manchester City, who were downed 2-1 by West Bromwich Albion.

Now while many fans will try and and defend this loss by saying that fourth spot in the league is the priority, there is still the small matter of facing another trohpyless year. The famous banner at Old Trafford acts as a constant reminder of those 34 winless years and it is a massive monkey on the back of the club. 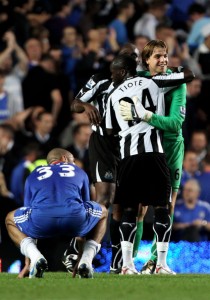 Roberto Mancini claimed tonight that he had no choice to field a backline comprised of two teenagers and two other defenders who have barely reached double figures in first team games between them. That’s all well and good until you look at the substitutes bench and see Pablo Zabaleta’s name. The Argentine hasn’t featured too regularly this season and would surely have benefitted from another start while also adding some much needed experience to the defence.

Mancini’s decision to deploy three out and out strikers for the first time was also puzzling. Why deviate so much from the negative tactics he seems so fond of in the league? Patrick Vieira must have felt quite isolated without two other holding midfielders alongside him.

The bottom line is that, with so many other top clubs going out, City had a real chance to at least emulate last season’s semi final spot and possibly go one step further. Instead the half hearted approach to an away tie with a club in the same division meant Mancini got exactly what he deserved.

It’s the 1000 or so away fans who made the midweek journey to the Hawthorns that I feel most sorry for, especially when the boss only recently claimed that the cup is very important to him. Funny way of showing it.

The problems at Anfield continue to mount meanwhile with Liverpool’s defeat to Northampton Town on penalties. Roy Hodgson also went down the route of fielding inexperienced youngsters which is a somewhat questionable decision given the club’s dour start to the season. While not the most prestigious of ties, a win is a win and would have at least appeased the boo boys for a while.

It all looked to be going so well when Milan Jovanovic gave them the lead inside ten minutes but the visitors, who languish near the bottom of League Two, responded superbly and forced extra time thanks to Billy McKay. They then took the lead on 96 minutes through Michael Jacobs but a David N’gog finish sent the game to penalties. N’gog quickly went from hero to villain, missing his spot kick in the shootout, and when substitute Nathan Eccleston smacked the crossbar with his effort Northahmpton could celebrate a famous victory.

With Chelsea, City and Liverpool bowing out tonight and Tottenham also falling by the wayside this week, it leaves Manchester United and Arsenal as the clear favourites to pick up some silverware come March.

One thought on “Going, Going, Gone”