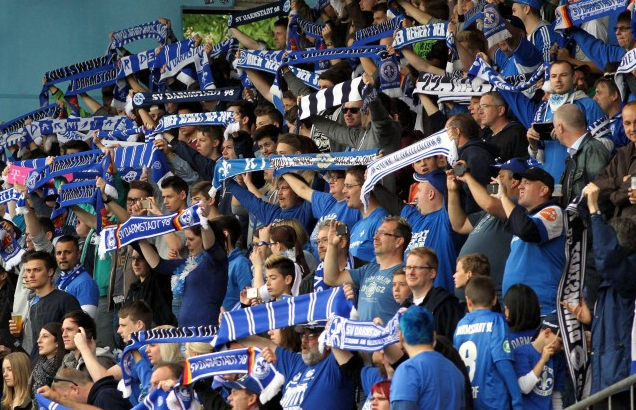 There is something that feels so totally unpretentious about SV Darmstadt 98 that it’s really hard not to like them.

The club itself shouldn’t be in the second division this season, and not because of anything that happened on the field, most there will readily admit that.

At the conclusion of the 2012-2013 3. Liga season, Darmstadt were relegated to the fourth-tier regional leagues, before financial trouble at arch-rivals Kickers Offenbach meant OFC would be losing their 3. Liga license. Darmstadt would take Offenbach’s place in the third division as the team with the most points previously slated to go down.

In what was maybe the best transfer in club history, SVD 98 signed SV Wehen Wiesbaden striker Dominik Stroh-Engel that summer. In 34 appearances for Wehen he managed a tally of eight goals, so it must have been hard to imagine him shooting Darmstadt into the second league, but that is very close to what happened. In 34 appearances for “die Lillien”last season, he scored 27 times.

From being relegated and then spared from that fate by Offenbach’s problems, nobody was picking Darmstadt to contend for promotion, but after a hot start to the season, they kept up their form.

Talking to a few SVD fans, it seems like it never got more believable as the season went on, and at the end of it their point tally of 72 was good enough to earn a spot in the Relegation playoffs as they’re known in Germany, even though there is the distinct chance that nobody gets relegated at all (like Hamburg this season against Greuther Fürth).

Second division side Arminia Bielefeld limped into the Stadion Am Böllenfalltor to meet SVD for the first leg of the playoff.

The Stadion Am Böllenfalltor is a disjointed oval of a place with three sides of terraces connected by a main stand that is the only portion of the stadium with seats. It really feels like stepping into another time when you wonder down the steps to an open space to stand.

It’s a bit like walking into an old relative’s home that still has shag carpeting and features far too much green on the walls and furniture because they have been physically too weak to redecorate since about 1976. Maybe 10 years ago you would dread going there, but now every other place like it is gone. It’s the only one that remains, and you realize you would hate for it to go away.

Most sports fans have been to stadiums like this, and usually the reactions they elicit contain the noun “dump,” but for some reason I cannot bring myself to use that word on the Bölle. It has so much character in its dilapidation, in the grass growing through the cracks of the terraces, in the fanshop that’s a probably a discarded rail car; it is, simply put, very hard not to love the place.

During any match, you’ll see children scaling the fences at the bottom of the terraces to have a better look at the action and men old enough to remember watching the glory days of playing in the first Bundesliga from perhaps the very spot where they’re standing at that moment.

Darmstadt’s playoff with Bielefeld began in very disappointing fashion. Three Bielefeld goals to only one for Darmstadt made the two clubs switching divisions very, very unlikely.

After the match, SVD’s trainer Dirk Schuster plainly stated what anyone who watched was thinking:

We were too naïve in the first half in the goals we conceded. You can tell who are the second division team and who play in the third division.

In Bielefeld, Darmstadt knew they would have to play a great match, but they certainly didn’t know they would get a miracle.

They were going to need three goals no matter what Bielefeld did to resolve their away goals situation, and got started on that quickly enough with familiar scorer Stroh-Engel after 23 minutes on a volley from distance right in front of the away support.

After the halftime break, the Lillies attacked regardless of the consequences and grabbed another in the 51st minute with a Hanno Behrens back-heel flick that crossed the line for a brief period before being cleared, but was correctly awarded as a goal.

They immediately faced some of those pesky consequences of committing numbers forward though, as Bielefeld pulled one back to put the home team in the driver’s seat once more.

Still needing one goal to force extra time, Darmstadt’s situation wasn’t terribly different from before conceding, and they would get that goal.

It was one of those moments that make you realize perhaps fate is with this team, that maybe there was something else working in their favor. Or, maybe that this match was being played on an Xbox or Play Station and we were too dumb to notice the change in graphics.

For the second time in the match, an SVD 98 player connected on a volley with stunning results. This time it was Jerome Gondorf lacing a shot from 20 yards to the bottom corner in the 79th. This volley fell perfectly for Gondorf after a failed clearance followed by two players colliding, using the force of the collision to apparently propel the ball in the Darmstadt scorer’s direction.

Almost unthinkably staring at extra time, Schuster revved up his team for one final push as if the football gods owed them something they haven’t already received.

They actually could have wont the tie in regular time if not for a few goal-line clearances and a suspect handball that went uncalled, so they felt hard done when Bielefeld scored in the 110th minute on a poorly hit shot off a seeing-eye cross.

Two minutes were added to the 120 and Darmstadt had to try anything and everything to get another goal that would put them up 2-4 (5-5) and promoted on away goals.

Darmstadt lumped the ball forward, and another scramble and failed clearance at the top of the box left colliding players on the ground when somehow the ball ended up at the left leg of Elton da Costa.

Like a traction engine, da Costa’s left foot swung through the ball. Watching it live, everything kind of went silent for the period the ball was in flight. That flight included a beneficial deflection, and da Costa’s stunning hit ended up in the 2. Bundesliga.

“There is a Football God!” Said a very emotional Dirk Schuster after the match, and he was not referring to Bastian Schweinsteiger in his remarks.

But to be fair, it seemed like there was more than one on that day.