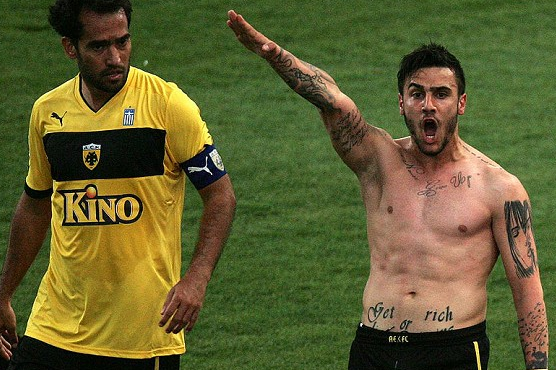 He denied it and said he didn’t realise what a Nazi salute was, but is Giorgos Katidis’ supposed ignorance emblematic of the problems which exist in Greek society with regards to racism?

The AEK Athens midfielder performed the salute after scoring for his club against fellow Greek Super League side Veria at the weekend.

Captured on camera, the images of the 20-year-old with his left arm raised were spread across the internet within seconds.

Particularly poignant was the look on Katidis’ team-mate Roger Guerreiro’s face. Guerrerio is a black Brazilian who has represented Poland at international level thanks to the three years he spent with Legia Warsaw.

Equally aghast were Katidis’ Greek team-mates, although AEK’s German manager Ewald Lienen offered a more peculiar explanation. He supported his player, insisting he is apolitical and probably saw the salute “on the Internet or somewhere else, without knowing what it meant”. A strange comment from a man who was involved with West Germany’s peace movement during the 1980s. Lienen even took part in the Peace List, for which he was a candidate for the European elections in 1984.

Suspended by AEK, Katidis was also banned for life from the Greek national team; he had capped his country at under-19 level.

“I am not a fascist,” he said. “I hate fascism and I wouldn’t have done it if I knew it meant something like this. I know the consequences.”

He is not the first – and probably won’t be the last – footballer to be associated with racism. Paolo Di Canio and AC Milan goalkeeper Christian Abbiati have both spoken with pride about their fascist ideologies.

The Katidis controversy came on the same weekend that Greece marked the 70th anniversary of the deportation of its Jewish population.

Thousands of Greeks took to the streets of Thessaloniki, where the majority of Greek Jews lived, in remembrance of more than 50,000 Jews who lost their lives in Nazi concentration camps during the German Second World War occupation. Only around 1,000 Jews remain in the country.

Particularly worrying for them, as well as for every minority and every rational-thinking person in Greece, is the rise of a neo-fascist party in the shape of the Golden Dawn.

The austerity measures enacted in response to the Greek economic crisis have propelled the rise of right-wing politics.

The crisis has decimated its football clubs, especially AEK Athens and Panathinaikos.

AEK were on the verge of a financial disaster – relegation to the fourth division was threatened by the country’s FA – until a consortium of businessmen persuaded millionaire Greek-American Nikos Notias to buy the club.

Giannis Vardinogiannis relinquished control of Panathinaikos last summer to the Panathenian Alliance, who now run the club, with supporter Giannis Alafouzos as president.

Even if he had known little about the Second World War, Katidis must have been aware of Golden Dawn’s appropriation of Nazi imagery, such as the swastika.

Its followers regularly performing the Nazi salute for the world to see. Its links with football hooliganism go back nearly 14 years.

During a game between Greece and Albania, Albanian fans burned a Greek flag – which led to a series of repercussions by Greek nationalists against foreigners in the country.

Pantelis Kazakos, a nationalist and Golden Dawn member, shot and killed two people and wounded seven others in an attack in Athens. Other members formed the hooligan firm Galazia Stratia (Blue Army). The firm carried out more attacks on immigrants, a notable case being after Albania beat Greece 2-1 in 2004. Violence erupted against Albanian immigrants in various parts of Greece and an Albanian was murdered in Zakynthos.

In last year’s national elections, Golden Dawn received seven per cent of the popular vote. It was enough for the party to enter parliament for the first time. In the build-up to the elections, Golden Dawn founder Nikolaos Michaloliakos performed the Nazi salute a number of times. It provoked outrage in Greece and around the world.

Unless Katidis was living in a hole, he would have read about it or seen it on television. It has been reported that he has retreated to Italy in a bid to escape the media in Greece. Perhaps he can sit back and think about the anger he has caused.

He should learn about what happened during the Second World War; Katidis should read about the Nazi occupation of his country. Then maybe he will admit what he did was terrible and help with the fight against racism in both football and in Greek society.

Unlike the bigoted Golden Dawn members, whose racism will probably never go away, Katidis still has time to change.

One thought on “Giorgos Katidis – Ignorance is not an excuse”