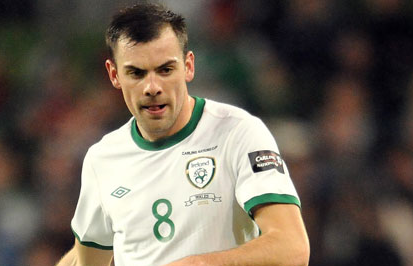 When Everton were beaten 2-1 at the hands of Chelsea on Sunday afternoon, the majority of fans and pundits seemed to focus on the absence of the big-haired Marouane Fellani, and how Everton may have fared better if he had been present.

This, of course, may well be true, but I feel that another midfield maestro was conspicuous in his absence – Darron Gibson.

Gibson may not grab the headlines like his Belgian team-mate, but is just as integral a cog to the Everton machine. He may not provide as many spectacular moments as Fellaini does, or have as much of an obvious impact, but the Toffees sorely miss him when he’s not around.

Just look at the stats – since the Derryman joined the club from Manchester United back in January 2012, Everton have not recorded a single league loss with him on the pitch. The only league loss Everton have suffered that he has featured in was the 2-0 reverse to West Brom – but Gibson had been withdrawn after just 19 minutes due to injury, at which point the game was scoreless.

But what does he bring to the team, exactly? That’s precisely the question many Evertonians were asking upon hearing the news that he had signed for the club. They thought that he was just another ‘United reject’, a one-trick pony whose only ability was to score the occasional screamer from long-range.

How wrong they turned out to be. As soon as he arrived at Goodison, he began to assert himself on the pitch, turning out steady performance after steady performance in the holding pivote role – his debut month finished with a debut goal for his new club, a trademark pile-driver to ensure all three points against Manchester City.

This season, it has been more of the same from the Republic of Ireland international. He is very highly rated amongst the Everton faithful – he possesses a passing ability that has not been seen on the blue half of Merseyside since Mikel Arteta departed to Arsenal, has a wonderful football brain, and is very responsible defensively. He is the perfect antithesis to all the mercurial attacking flair the Blues have exhibited this campaign – he guards the back four when his team-mates maraud forward just as easily as he can initiate an attack through the means of a

His style of passing is devastatingly effective. Unlike Joe Allen, or other midfield players who are obsessed with statistics and retain possession like a crab, ‘Gibbo’ is intent on results. His pass-completion rate for the 2012/13 season so far is 81%, but what is failed to be transmitted in that statistic is the lofty ambition in his passing.

Sure, he occasionally taps around at the back in order to slow the tempo of the game, but chiefly his passes are more adventurous, whether it be a killer through ball that splits the defence to be latched on by Kevin Mirallas, or an inch-perfect long ball that his taken down by Marouane Fellaini.

Everton are, quite simply, a better side when his name is on the team sheet, which made the news that he will be out for over a month due to a recurrence of a thigh injury all the more worrying. He has only made nine league appearances this season due to a series of niggling injuries, and I’m sure David Moyes and everyone connected with Everton Football Club are desperate to ensure he doesn’t garner the nickname ‘sick note’.

Alan is a football writer from Cork, Ireland. He writes for ExtraTime.ie, Cork City FC, and the Evening Echo, amongst others.