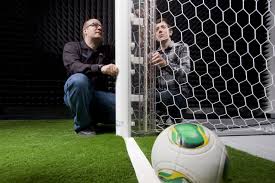 The German Football League (DFL) has ruled out the introduction of goal-line technology in the wake of Bayer Leverkusen’s so called “ghost goal” over the weekend.

The governing body have made the decision due to “standard of the available systems.”

Leverkusen went on to win 2-1 thanks to Stefan Kiessling’s 70th-minute header against Hoffenheim which went into the back of the net via the side netting after the ball had gone wide.

FIFA stressed to the German news wires that the referee’s decision is final, all but ruling out a replay unless it can be proven that there was a breach of the rules.

The matter has led to renewed discussion over the introduction of goal-line technology, with the German media proposing the use of either Hawk-Eye — now used in England’s Premier League as well as sports such as tennis and cricket — or GoalControl, which FIFA tested successfully during the Confederations Cup and will use during next summer’s World Cup.

“We are not against technological progress, but we are talking about a highly complex system here, which might still be failure-prone,” he said. “The 3cm margin of error allowed by FIFA is not acceptable for us.”

Kiessling, meanwhile, told Leverkusen’s official website that  the criticism he has faced has been “pretty hard”.

The striker appeared to realise he had missed but, according to reports, failed to tell the referee when questioned on the matter. He has faced abuse on the internet and his behaviour has been the subject of scrutiny in the media. While some will question Kiessling’s actions from a moral point of view, the fact of the matter is that it’s the referees job to implement the laws of the game and not the responsibility of players.

Hoffenheim, meanwhile, have said that they will auction the ‘ghost goal’ netting for charity. “The netting has cause a lot of controversy and anger. Doing something for a good cause is a good way of compensating for the damage,” Hoffenheim general manager Peter Rettig — no relation to the DFL’s Rettig — told Bild.

Some have suggested that a replay is the fairest method of solving this conundrum. It was the assistant referee’s responsibility to check that the netting was intact before the game. He failed to do so, meaning that the game should not have taken place in the first place and hence is the argument used in favour of a replay.

Curiously, the Hoffenheim players had offered only minimal protest in the immediate aftermath of the goal – were they already thinking about a replay? – but Kiessling’s behaviour was later called into question in very strong terms. “His whole body language suggests that he clearly saw that it went wide,” said the former Hoffenheim coach Ralf Rangnick. “I think he missed a great chance to do something for fair play.” Kiessling had been asked about his version of events by the referee and replied that he “wasn’t sure”. This story looks like it still has some way to run before it reaches its conclusion.