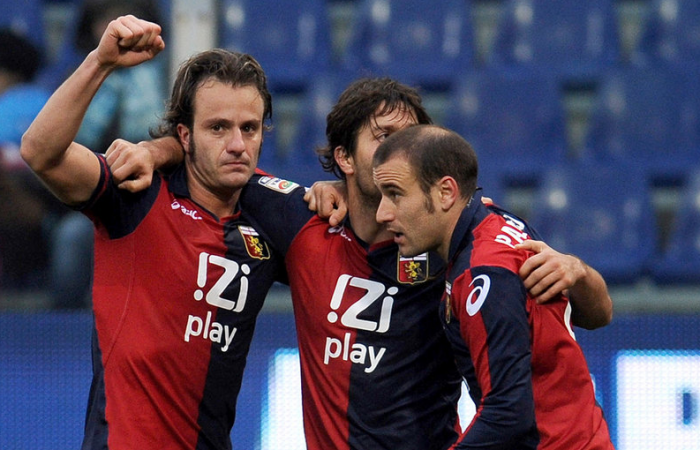 At the end of last season, after their fierce cross-town rivals Sampdoria were relegated, some 30,000 Genoa fans paraded a coffin around the streets of the city to mourn – or rather relish – the ‘death’ of their Derby della Lanterna opponents. It’s therefore quite coincidental that a season on, it’s il Grifone who are looking over the precipice at the relegation underworld.

Since Sampdoria went from Champions League football to Serie B in quite incredible fashion, a new phrase has been coined amongst Italian football fans. Throughout this season there’ve been a number of big clubs who have looked at risk of ‘doing a Samp’.

Palermo, after the summer departures of their stars Salvatore Sirigu, Mattia Cassani and, of course, Javier Pastore, looked like they would be in some serious bother, not least when crazy president Maurizio Zamparini sacked promising young coach Devis Mangia and replaced him with old timer – and a rather unsuccessful one at that – Bortolo Mutti. However, much to the surprise of Serie A fans, Mutti has been able to turn the fortunes of the Rosanero around, squeezing every last drop of performance from a distinctly average side, culminating in a 5-1 drubbing of Lazio last weekend.

Fiorentina are another big club who’ve struggled this season. Following the sacking of Sinisa Mihajlovic, the Viola fortunes were supposed to have turned around. But, the well-respected Delio Rossi has found it as difficult a club to coach as his counterpart, currently languishing in lower mid table – albeit with a few games in hand on clubs above them.

Genoa are currently sat in 10th place, exactly mid table. Hardly a crisis, I hear you say. However, coach Pasquale Marino is going through a rather tough spell at the moment, with the club having failed to win in four matches and winning just three times since the turn of the year.

Looking at their squad you will see some very capable players. French veteran Sebastien Frey (despite putting on a few pounds) has shown himself to be one of the very best goalkeepers in Serie A over the years. Miguel Veloso is an enormously capable midfielder, with the Portuguese international attracting interest from Manchester City, Arsenal and Tottenham down the years.

Up front, things look even better. Argentina’s attacking midfielder Rodrigo Palacio is capable of moments of magic, and newly-acquired striker Alberto Gilardino boasts a Serie A Player of the Year award to his name thanks to an enormously successful spell at Parma, where he bagged 50 goals in 96 games. Gila struggled in his final season at Fiorentina, although the fresh start at Genoa may be enough to get the World Cup winner firing on all cylinders again.

However, looking at their last game; a 2-2 draw at home to fellow mid-tablers Parma, and things begin to look concerning. The side seemed to lack any real shape or cohesion, with miscontrolled balls and misplaced passes occurring left, right  and centre.

In fact, in the first half, their only player worthy of any praise was the aforementioned Veloso, who was as energetic as ever in chasing opponents around the park, and winning the ball back.

Genoa have statistically the worst defence in Serie A, and on Saturday, it showed. By the end of the first half, the Rossoblu were two goals down, and Pasquale Marino was surely ready to pack his bags. However, thanks to a tactical switch (from 4-3-1-2 to 4-4-2), things began to turn. Through a brace from Rodrigo Palacio – the first being a penalty – they managed to pull it back in impressive fashion.

Despite their undoubted hard work in turning the game, as well as the absence of Gilardino through injury, they were certainly fortunate. Parma, who had been excellent in the first half (and have indeed been excellent since Roberto Donadoni took charge) went looking for more goals when they didn’t need to, something which, in hindsight, has cost them two points.

I highly doubt that Genoa will repeat the feat of their neighbours and will drop to the flaming inferno of Serie B, but Pasquale Marino may still need some divine intervention if he’s to keep his job. It was a disorganised first half from a side who looked in disarray, and – unlike in the last few seasons where they’ve been chasing European football, one of Italy’s grandest clubs (and Italy’s oldest club) may well have to settle for some lower mid-table mediocrity this time around.