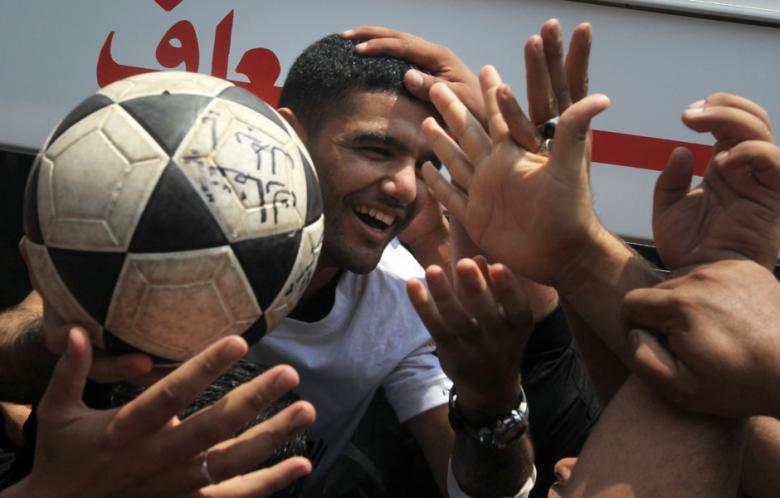 Israel is the proud host of the European U21 Championships in 2013 and among the teams qualified for the tournament you find Norway. After qualification, we have had several debates about how Norway should react towards Israel’s treatment of Palestinian footballers. I got hold of Gerd von der Lippe, a Norwegian Professor in sports sociology, to talk about the ongoing debates.

Von der Lippe immediately starts to talk about Mahmoud Sarsak (25). The Palestinian footballer who was detained by Israeli authorities for three years, without a charge or trial. Have you heard the story behind Mahmoud Sarsak? she asks. I answer: Yes, with the hunger strike. With Eric Cantona. Michel Platini and Sepp Blatter. “No, before all that,” she says.

In July 2011 I planned to take part in the Ship to Gaza convoy. We were stopped, because we lost the Turkish ship Mavi Marmara. And I was one of them who weren’t allowed to continue. Two of us wanted to get into Gaza in a legal way, and continued our journey. I decided to start a sports project. Football is the only sport that is big in Gaza, so it had to involve football. The project is called Football, masculinity and war. When we got into Gaza, I interviewed several male players and leaders.

Before we travelled home, I asked one of my Palestinian helpers if there was something I could do for him. First he was unsure, but when I told him I knew Per Ravn Omdal (former chair member in UEFA), he decided to tell me about Mahmoud Sarsak. Sarsak was travelling from Gaza to the West Bank in 2009 with two other footballers. Sarsak was the best of them. He was going to train both with a team at the West Bank and with the national team. He had all the right permissions to travel, so everything was supposed to be in order. When they got to the border, the soldiers picked out Sarsak and threatened the other two that they would get arrested too if they ever tried to enter the West Bank again.

The 70 year old professor, political activist and former Norwegian champion in 100, 200 and 400 metres, talks fast and vividly. You can tell by her voice that this is important to her. When von der Lippe was told about Mahmoud Sarsak, nobody outside of Palestine knew his story. For two years he had been in jail without a charge or trial. Von der Lippe started to work on his case, she wrote several articles in Norwegian newspapers, and started to contact the right people, from Johan Olav Koss (four time Olympic champion in speed skating) in the organisation Right to Play, to Per Ravn OmdaL and Palestinakomiteen (The Palestine Committee of Norway). In the end, all of this made FIFA and UEFA aware of Sarsaks situation.

This is how the snowball started to roll, and it is something Norway can be proud of. I went back to Gaza in November 2011, met Sarsak’s family in Rafah and talked with him on the phone from the prison. It was very moving. He was so grateful for my work trying to help. In jail, he was sent all the articles written about him. When he was set free in July 2012 he told me on the phone: This kept me alive.

The Israeli authorities accused Sarsak of being a member of Islamic Jihad, but there existed no evidence for these accusations. Still, the Israeli authorities prolonged the detainment several times. In March 2012, Sarsak started a hunger strike that would last 96 days, which brought his case publicity and in the end freedom. Notable former players such as Eric Cantona and Frederic Kanoute got involved, as well as the top leaders in world football, Sepp Blatter and Michel Platini.

On 12th June 2012 Blatter and FIFA contacted the Israel Football Association (IFA) with their concerns about the treatment of Palestinian footballers. This shows that FIFA/UEFA doesn’t ignore the difficult situation in Palestine/Israel. Sarsak was released from jail on 10th July 2012. In his youth Sarsak took, paradoxically, part in an Israeli and Palestinian “peace team” that travelled together to play in the world biggest youth tournament, Norway Cup in Oslo.

There are several good reasons to criticise Israel for their handling of Palestinian footballers and Palestinian football in general. Players have been detained for long periods. Teams have been blocked from travelling to matches. Palestinian coaches are denied too travel to coaching seminars held by FIFA. And stadiums and training grounds have been destroyed by the wars. Last out was the Palestine stadium in Gaza which was partly damaged by Israeli air force on 19th November 2012.

Giving the European U21 championship 2012 to Israel was a controversial move by UEFA. Now football leaders in participating nations are faced with a dilemma. Should they allow their teams to participate, or should they press UEFA to change host nation? Prominent leaders in Norwegian football are among those who are facing these questions. Debates will probably occur in variable degree also in the other participating nations: England, Germany, Italy, Netherlands, Russia and Spain. Some Norwegian leaders might even have secretly half-hoped that their side didn’t beat France to get qualified for the championship. It would have saved them from making some tough decisions, but Norway won 5-4 on aggregate, and qualified to an U21 championship for the first time since 1998.

It didn’t take long before support groups for Palestine started to put pressure on the Norwegian FA. The federation president, Yngve Halléen, agreed to meet up with Palestinakomiteen 8th November 2012. Halléen received an open letter from the committee that included several concerns about the situation for football players in Palestine, and asked the federation to press UEFA to move the championship to another country. The federation has still to make an official stance, but Halléen had some interesting comments. For instance he said:

I fear that Israel could use the championship for propaganda purposes, but we can use it to highlight the other side of the conflict.

He also assured the committee that the subject would be raised within the squad. This shows that Halléen is aware of the political dimension in this case, and indicates that Norway will take some kind of symbolic action. It should also be mentioned, that Norway’s national team coach, Egil Olsen, has previously criticized the occupation of Palestinian land, and has backed an academic and cultural boycott of Israel. The main argument behind the boycott is that the world leaders and world organizations are doing too little to put pressure on Israel, and that it is up to ordinary people to take the challenge.

Von der Lippe wrote an article called “I accuse” in Dagsavisen September 2012. In the article she accuses the IFA of not living up to FIFA and UEFAs regulations. For instance, the IFA have a problem following article number 9 in the UEFA statutes, which says: A member association may in particular be suspended if state authorities interfere in its affairs in such a significant way that: it may no longer be considered as fully responsible for the organization of football-related matters in its territory. Palestinian footballers travelling between Gaza and the West Bank needs to cross Israel, but on their way, they are stopped and arrested. This is problematic. Von der Lippe also means that IFA breaks FIFA statutes by blocking Palestinian football to grow. She thinks Israel fear the national symbolic value that great Palestinian athletes represent.

What do you think of UEFA giving the championships to Israel?

At first there was talk about boycotting the championships. Then it was suggested to reallocate it. But I think it is too late. It will not happen. The championship will be held in Israel. I think all this is part of reshaping “Brand Israel”. Instead of being associated with war and occupation, they want to be associated with football, culture, science. I am sure the tournament will be a fantastic success. The Israelis are always good at what they want to be good at. Be that warfare or big arrangements. They work really hard, so I do not doubt that it will be a success. But I sincerely hope that no rockets will be sent from Gaza. That would hurt the Palestinians immensely.

What can we expect from the players? In 1995 Lars Bohinen (former Nottingham Forrest, Blackburn and Derby) boycotted a private international between Norway and France, because of France testing their nuclear weapons in the South Pacific. Can we expect something similar from these young footballers?

We have to remember what time we are living in. The youths of today are a-political. It is not the same as when I was young, in the 70s. Almost everybody was interested in politics. And you didn’t have a chance on the best looking boys, if you didn’t knew some politics. Today the youth are raised not to be interested in politics. It’s no longer cool to be engaged in political questions. We have to think of this when considering what to expect from the players. Therefore we cannot expect any of them to boycott the championships. But we can expect that they listen and that they ask questions. I wish the Norwegian side all the best in the tournament, and hope they go as far as possible. I also hope that they look beyond the game of football and into the game of politics.

The upcoming championship in Israel does not only represent a dilemma for football leaders in Europe. It is also a dilemma for football supporters who consider travelling to Israel. If their nations decide to participate in the championships, should the supporters follow, or should they stay at home and save their money for the World Cup in Brazil 2014 instead? I am one of those who are considering a trip to Israel next summer, both to see some great football and to get an insight in the troubled region. I have never been to the Middle East before, and don’t know what to expect.

I believe it is a bigger chance of the championship being used as national propaganda, if the Norwegian and English and Dutch supporters stay at home. In these sides you most definitively will find players with Arabic background, who will have a positive impact on the tournament. If the teams do their homework properly and learn about the causes of the conflict, they could play an important role in promoting Palestinian football. One idea is to arrange training matches between Norwegian and Palestinian youth teams. Or arrange for U21 players to visit Gaza or the West Bank.

I very much doubt that UEFA will change host country, now that the decision is made, unless the security situation should change. Therefore it is important to start thinking about how this tournament could be helpful also for Palestinian footballers. Travelling to Israel might very well be an important step.

6 thoughts on “Gaza blues? – Norwegian views on the European U21 Championships”