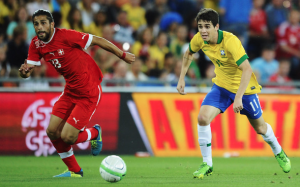 There have been several transfer deals done and dusted prior to the World Cup, but the real business starts once the trophy has been lifted and players return to their respective clubs. In the meantime the ‘transfer rumour mill’ never stops turning, and many names have already been mentioned as targets for Europe’s top clubs.

In terms of transfer speculation, the positions of both left-back and right-back are two of the most interesting.

With the departure of long-time servant Bacary Sagna Arsenal have an immediate need for a right back – their pursuit of Serge Aurier has so far proved fruitless. Manchester United’s Rafael has never fully convinced and so the new manager may want to strengthen. And with Ivanovic being called into the centre from time to time Chelsea look to increase their strength in-depth.

There also seems to be a demand for left-backs and with the emergence of Luke Shaw at Southampton, Alberto Moreno of Sevilla and Alex Sandro of Porto, mixed with the aging of players like Ashley Cole and Patrice Evra, it makes for interesting times when scouting that particular position.

Cesar Azpilicueta has carved himself out a position as Cole’s replacement in Chelsea’s lineup but he typically plays right-back for his country and is more natural on that side. Patrice Evra can’t go on forever and many had suggested that Evra would leave Old Trafford during the summer. Although the signing of a one-year extension gives manager Louis van Gaal some leeway in this position for the time being.

With regards to the World Cup, one of the more interesting teams in the full-back department is Switzerland. They have Ricardo Rodriguez at left-back – who plies his trade in Germany for VfL Wolfsburg – and at right-back Stephan Lichtsteiner – who protects Paul Pogba as a marauding right wing-back for Juventus in Serie A.

Rodriguez is only 21 and was one of Wolfsburg’s most consistent performers in this year’s Bundesliga campaign. He scored five goals, created five assists and instincitvely pops up in attacking positions with limited amount of effort. He is a set-piece specialist and could prove to be a major coup this summer, should someone take the chance.

At 30 years old, Lichtsteiner is at the other side of his career and may welcome a move to the Premier League. He is most comfortable as a wing-back but can play as a right midfielder in a defensive system. He is a perfect fit for a Jose Mourinho counter-attacking team. He scored twice and chipped in with eight assists this Serie A campaign, proving a constant thorn in opposition’s sides throughout the year.

While Lichtsteiner is a long shot of a transfer target, it will be interesting to see how his Serie A form transfers across to the World stage. In today’s era of footballers when everything down to the number of kilometres travelled in a match, spectators like to watch games with a purpose. Watching Rodriguez and Lichtsteiner operate on there respective sides could prove to be enjoyable viewing for those interested in such matters.

The first game Switzerland play is against Ecuador, where Rodriguez will come up against a Premier League calibre winger in the shape of Antonio Valencia. In their second group match the Swiss full-back duo face France’s Antoine Griezmann and, if fit, Frank Ribery, a pair of battles that may define not only the game but both countries respective World Cup campaigns.

With the right performances for the Schweizer Nati this summer both players could see themselves piquing the interest of the Premier League’s elite, with Lichtsteiner is the kind of full-back that would fit like a jigsaw piece into a Jose Mourinho team, while Rodriguez has the kind of technique and attacking verve that might attract bids from Brendan Rodgers or Louis van Gaal.