It’s funny to think about it, but it wasn’t that long ago that Saint Etienne were a club in disarray with little direction to speak of. They were relegated to the second division in France in 2001 as a result of handing out fake passports to two of their players. ASSE also flirted with relegation two seasons in a row in 2008-09 and 2009-10, finishing 17th both times.

Now Saint Etienne have done much better in recent years, finishing in the top five in Ligue 1 the last two seasons and are on track to do so again this season. ASSE also won the Coupe de la Ligue trophy in 2012-13.

Even during the tough times, Saint Etienne have been the starting points for a number of great talents: Pierre-Emerick Aubameyang, Dimitri Payet, Kurt Zouma, Bafetimbi Gomis, Blaise Matuidi and more. Who can forget the 2007-08 side that led Saint Etienne back into European football by finishing fifth with a young Gomis scoring 16 goals.

The best way to describe Saint Etienne’s current season is solid. Not spectacular, but solid. They haven’t had the flair of Marseille or the youthful exuberance of Lyon or even the expensive yet combustible talents of PSG. They’ve just gone along their business, not truly contending for the Ligue 1 title but hanging around the European spots.

Since week 15, ASSE haven’t been lower than fifth in the table. Plus with PSG’s win over Bastia in the Coupe de La Ligue, fifth place in Ligue 1 this season qualifies you for the Europa League qualifying round.

The first words that come to mind with Saint Etienne are defensively sound. Simply put, it a chore to play attacking football against ASSE. Saint Etienne are tied with Lille (who are very much of the same mold) in fewest shots conceded per game.

According to my pseudo expected goal model, ASSE have the fourth best defence with a ExPG mark of 29.9 goals. They’re also third last in shot pace (a rough proxy for how fast a team plays) at 21.6.

In comparison to Marseille who under Marcelo Bielsa have been a hyperactive pressing monster hell bent on destroying anyone and everyone (including themselves), Saint Etienne are much more conservative defensively. They set up the defensive lines and dare you to break them down 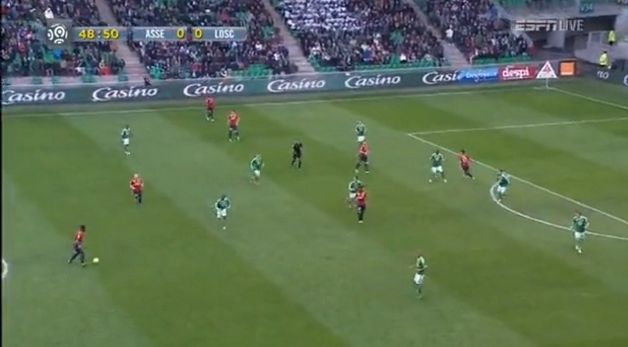 Having players such as Max Gradel and Romain Hamouma, who have very high work rates as wingers makes this setup work well because it allows the #9 forward to just roam around in the oppositions half and pounce on potential miscues from the opposition.

Of course on occasion ASSE will abandon their conservative nature when the opportunity arises. Against Marseille, they played more aggressively to counteract the fast pace passing that feeds their attack. It wasn’t hectic pressing that you see from, well Marseille themselves. But it was a change of pace from one of the best defensive sides in Ligue 1.

Being a good defensive team in Ligue 1 and in football period can take a team pretty far (just look at Monaco in the Champions League) and Saint Etienne are great in that end of the pitch. What keeps Saint Etienne from truly contending with the likes of PSG/Marseille/Lyon in Ligue 1 is just the lack of attacking talent available to use. Saint Etienne only rank tenth in shots per game, tenth in shots on target per game and seventh in expected goals for at 36.2 goals.

At times, watching ASSE play attacking football can feel like watching paint dry. It consists of a lot of short passing in the midfield, the sporadic moments of their fullbacks going up the pitch and little punch going forward. It’s not shocking in some sense.

Though the two work hard and fit in the system when it comes to being target man/outlets, especially when the wingers cross the ball, the duo have been bystanders when it comes to initiating play. After hitting double digits in goals the last two seasons, Erdinc’s production has dropped this season to only seven goals with his shot rate at a paltry 2.3 shots per 90 mins, the lowest rate of his career. This after registering a career high 3.8 shots per 90 rate last season with both Saint Etienne and Rennes.

The knock-on effect from Erdinc’s production declining significantly has been other players having to pick up the slack. One wouldn’t have to look hard then to see the play of Max Gradel this season. He’s the top scorer for ASSE with 10 goals, and has fired off an incredible 4.1 shots per 90 this season which ranks second in Ligue 1 behind Zlatan Ibrahimovic for players that have played at least 500 league minutes.

You can’t go many minutes when watching Saint Etienne without noticing him be involved in the attacking play. Whether it’s him shooting, or taking people on with his dribbling prowess, he’s everywhere. He’s the fulcrum of ASSE’s offense. This is both good and bad, depending on your perspective.

There’s obvious benefits to having a winger be such a threat. He can stretch the defence of the opposition by taking on their fullbacks, which makes the CB’s having to stretch themselves to compensate leaving a hole available for the other attacking players to feast on. And Gradel most of the time functions as a hybrid left sided winger/forward which puts both the right sided fullback and CB in a pickle to deal with.

Of course there’s almost a statue of limitations to how much you have to rely your entire offense around a non striker, especially one that isn’t in the high percentile of wingers in football. As good as Gradel is and on his day he can be very very good, there’s almost a glass ceiling to how well an attack can function when he’s by far the main fulcrum.

Having the ball a lot means you’ll more than likely lose the ball, and Gradel’s 3.4 dispossessed per 90 rate speaks to that. Also for all that Gradel is as a player, he’s been an inaccurate shooter for some time now. Only 34.1% of his shots have hit the target this season, after registering 33.3% last season.

The reality is Saint Etienne need Gradel to shoot and shoot a lot, and though it leans towards the inefficient side of the ledger, there’s no real other options to choose from. No other attacking players in Saint Etienne who play regular minutes shoot a healthy amount.

The end result is games like the one Saint Etienne had yesterday versus an average Nantes side when they only had six shot attempts in a 1-0 win. It’s been the reccurring theme for Saint Etienne this season, and it’s exasperated even more when they play formations that feature both a #10 and a #9 in the line up.

Saint Etienne don’t have a traditional #10 on their squad and they’ve tried a number of people at that position but to no end. Their best formation is a hybrid 4-3-3 that eliminates the need for a #10 and can have midfielders like Fabian Lemoine play balls either over the top or onto Hamouma and Gradel to initiate the offense.

It rarely happens but when done right, Saint Etienne’s attack can really look fluid and fun to watch. Their game against Lens back in February was by far the most free flowing that Saint Etienne exhibited. Of course it helps that they played Lens who allow teams to attack them repeatedly, but it offered a fleeting glimpse into what Saint Etienne could do more consistently going forward.

Perhaps the most frustrating part about this for Les Verts fans is that despite the anemic attack, Saint Etienne are only two points out of the final Champions League spot. For a club that hasn’t been in the CL since 1982, it would be so disheartening if all that separated them from third place was that last remaining jolt on offense.

They’re fifth in both predicted points and team rating according to my model, fifth in shot on target ratio and fifth in expected goal ratio. And that’s all despite the issues up front. They might have the best defence in Ligue 1 period and they’ve just gotten minimal support up in the goal department.

Can Saint Etienne make an improbable CL berth? It’s looking more and more unlikely with each passing week. Unless Christophe Galtier can somehow find some batch of goal scoring from his squad, it’ll be the 33rd season in a row that Saint Etienne failed to qualify for the Champions League.

One thought on “Frustrations with Saint Etienne”