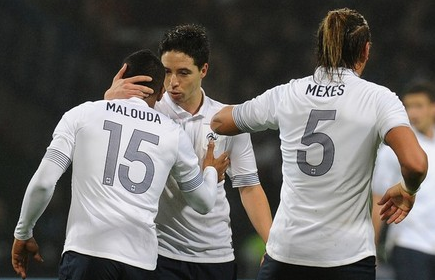 France’s 2-1 victory against a strong Germany in Bremen raised many eyebrows across Europe in midweek, as the Les Blues look to build up momentum for the European Championships.

The 1998 World Cup winners are proving little by little that they are recovering from the scandal of the 2010 World cup campaign, where they went on strike in protest at Nicolas Anelka’s expulsion under the reign of Raymond Domenech.

Those bridges are slowly being made ahead of their Euro 2012 opener against England on 11th June.

As their Euro 2012 opening opponents continued under the disappointing Fabio Capello, across the channel the French instigated a different approach. The team had to rebuild in order to establish themselves under inexperienced coach Laurent Blanc after the country’s outrage led to all 23 World Cup squad members to be banned for various matches.

World Cup captain Patrice Evra was banned for five matches and influential winger Frank Ribery was handed a three match suspension by the French Federation, forcing the manager’s hand with the untried.

He has slowly adopted his own approach by embracing his midweek opponents approach of slowly adapting promising youngsters, giving them needed experience to compete with experienced national players.

The leader of France’s 1998 and 2000 World and European trophies as a player, Blanc requires the best out of his players, and sees no shame in rebuilding by copying other countries football approach.

Speaking to the French media before the Germany encounter, the manager said:  “They’re one of the cornerstones of European – and world – football,” he underlined. “It’s not industrial espionage. We have the right to come and see what they’re doing better than us. Germany are a great team. I’m expecting mine to finally show some improvements in their game.”

The roots of that fresh start have been promising after performances in the qualifiers and the emergence of players like Yann M’Vila, Jeremy Menez and Yohan Cabaye replacing the old guard of Thierry Henry and Jeremy Toulalan.

That youth mixed with a recipe of passion and hunger has led the French team to an unbeaten run of 18 matches which included the impressive friendly victory over England at Wembley in November 2010.

A long time Arsenal and Barcelona target, M’Vila played with composure expected of Patrick Vieira in his prime and alongside Cabaye they showed promising glimpses of what England will be facing in Donestk in June.  The two dominating midfielders allowed more space for the freeing Samir Nasri into the central role just behind the striker. The Manchester City striker was increasingly prominent as the game went on, dictating the run of play and was the centre of any attacks.

In attack lies a number of options for Blanc as Montpelier striker Oliver Giroud, scorer in Germany, has been impressive in Ligue 1 and will provide as a good back up while Karim Benzema and Loic Remy remain first choices for the tournament in Poland and Ukraine.

At the back shows experience and a reliable duo of Phillipe Mexes and Adil Rami who were instrumental in the qualifying campaign, alongside first choice right back Bakary Sagna and captain Patrice Evra.

Throughout the team, the French squad look to have a good mixture of defensive qualities and also the attacking threat which could hurt any national side when they all hit form.

That shows with impressive win against Brazil and away victories in England and now the 2008 European Championship runners up.

All though out done by Spain in an international friendly, France will be hoping that they will be more than a threat to Spain’s European crown when it comes to the beginning of June.