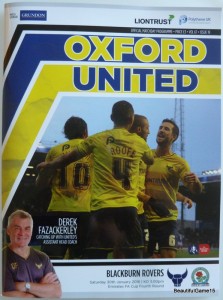 A packed train with a driver who is so laid back that when he delivers the news that the train has a fault and we will have to swap at Reading, instead of turning into a band of wild commuters ripping up seats and storming his cabin people smile, laugh and think yeah that’s okay.

He sounds like he has a beard and keeps bees, think he fancies going for a pint? His friendly demeanour is so powerful, it stops me being sick over myself as the man next to us tucks into his ‘Egg McNasty’ or ‘Bacon McDirtyShit’, or some such stinking crap.

Rolling through the Oxfordshire countryside, a blue sky overhead, we continue our FA Cup expedition. Before changing trains we are treated to an insight into the world of the upper classes.

Perched on our seats next to the Louis Vuitton luggage of two young women, we are treated to tales of how one of them was accosted whilst shopping by someone who “looked homeless” his comments on how tall she was “could you be any taller”, did not go down well as he blocked the crisps she wanted, and one about a recent camping trip with “Millie and Jack”.

Not that our topic of conversations are going to change the universe, “do you like walnuts?” I ask Tom. “No, too big” he replies.

An easy skip across the platform, and the new train continues us along, “hey its me again” says everyone new best friend over the speakers, “hopefully this one works”. Having not had the chance to tell my proud parents “I’m off to Oxford”, cannabis and Championship Manager put a stop on that.

My only previous trips to one of England’s great learning centre’s, were to visit a friend who actually had the application and intelligence to go, or taking in a museum or three and seeing Einstein’s blackboard and a cabinet of shrunken heads.

“I should’ve brought my sunglasses” says Tom as the bright dazzling sun, catches the metal work of a sea of shimmering bikes outside Oxford station.

Two day’s short of completing his dry January and Tom has capitulated and he is eager for a pint, as am I. Google’s suggestions were less than inspiring when we asked for places to drink near The Kassam Stadium, a Holiday Inn Express and a Gala Bingo came top of the pile.

We opted instead for a bit of a wander into central Oxford, choosing the first place we found, a nautical themed riverside joint nestled on the edge of a bridge. The ‘Quarter Deck’ outside seating area overlooking the water in the shadow of a willow tree, is a very nice place to top up my January tan. “I can think of worse places to have my first pint of the year” says Tom.

We get chatting to a Blackburn Rovers FC (BR) fan, his shirt hidden under his jacket. His prediction for the match is pessimistic to say the least “think we will lose” he says definitively, his opinion of the squad’s depth and qualities is damning “we have nothing, no pace”. Not noticing a strong North West accent I ask where he is from, “Salisbury” he tells us. 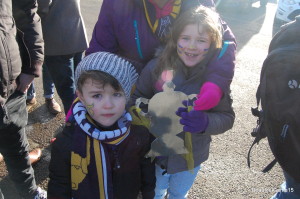 My next question is greeted with the kind of eye roll a celebrity gives interviewers, when they are asked the same question for the 100 time, when I ask how come he is a BR fan, “everyone always asks me that” but he is polite enough to tell me “picked a kit off a market when I was five” .

With time ticking, and always keen to get to a ground in plenty of time we head off, first considering a cab with Tom thinking it will only cost a “couple of shillings”, he doesn’t get out of London much.

However, instead we take the advice of the BR fans friend, a local, who tells us we can catch a bus to the ground around the corner, and it will take only “15-20 minutes” so under his direction, we head off.

There is plenty of Oxford United FC (OXU) yellow and blue in the city centre amongst the Saturday shoppers. I stop at every lamp post, traffic light and piece of street furniture to indulge my football sticker obsession, which is suitably satisfied, by lots of Russian ones.

Having not eaten yet, we consider the delights of a Chinese restaurant called the ‘Opium Den’ but think better of it.

All of a sudden a slightly panting and sweaty person approaches us, it’s the BR fan from the pub “the directions we gave you were wrong” he tells us, and has been nice enough to find us and let us know, restoring a small bit of faith in humanity. “Follow me” he says like a football Tenzing Norgay.

We do follow for a short while, only for me to spot a particularly fine example of a Borussia Dortmund sticker, and in the few short moments it takes me to take a picture, we lose sight of our guide and are now lost in Indian country.

Half remembering something he had said about an “ Oxford castle” we follow the signs, eventually stumbling across what we think is the correct bus stop, which is thankfully confirmed by a scarf wearing OXU fan, with an hour to kick off we feel we are making good time.

The bus is full with either bag ladened people who have satisfied their thirst for retail therapy and are on the way home, or fans of both teams making their way to the ground. Getting snarled up in Saturday afternoon traffic, our bus ride has turned into a bit of a crawl.

The driver is pulling up at bus stops with long queues, only letting a few new passengers on, and leaving huge swaths of people behind waiting for the next one. What seemed like an adequate amount of time to get to the match, is rapidly ticking away. Three BR fans have adopted a local, asking her every so often like children on a long car journey “are we nearly there?”. 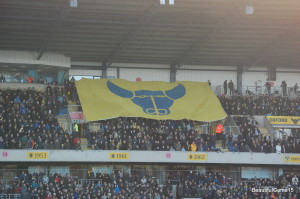 Tom and I look at the time and look at each other, not feeling like we are getting any closer, we start to consider the unthinkable, missing kick off!!

Our anxiety is relieved a little when a cheer goes up, someone has spotted the ground in the distance, but when the bus drops us slap bang in the middle of a housing estate, we still feel a million miles away, at least the badgered local gets some peace as most of the bus piles out with us.

We hang back, follow the crowd at a brisk pace with only fifteen minutes to kick off. We can only hope that ‘Merlin Road’ will bring us some magic and get us to the ground on time.

The smell of roasted chestnuts and the thin grey struts of a stand poking above the rooftops, relieves our anxiety further as we are now at least getting closer. Between the semi-detached houses through a small gap in a fence, the claustrophobia of suburbia opens up into some green wasteland, beyond which for the first time we can see two large stands of The Kassam Stadium.

Over a small bridge people take the opportunity to finish up their beers, under the watchful eye of the local police, and a man sells everyone’s favourite half and half’s “last chance to get your match day scarves”.

“A queue to get in” says an amazed fan, as we join the considerable snaking line from the turnstile. Some in the queue happily refer to themselves as “plastic fans”, not regulars I would guess, just here for a bit of FA Cup glory.

Such is the design of the ground, big gaps on each corner between the stands means the noise from inside floods out, a song I would have always associated with Chelsea, The Liquidator by Harry J All Stars, but have now heard at numerous grounds, plays as we wait to go in. Kick off is imminent, only a wooden fence separates us.

Despite the wait, people are understandably in a great mood, the family behind us all have their faces painted, and we clock up our first tin foil FA Cup of the day, “gonna take it to Wembley” they tell us.

From handing over my ticket, squeezing through the turnstile, getting through the scrum to get a programme, being pleasantly surprised they have a 50/50 draw, and getting a ticket from the young lady behind the counter, who is clearly rushed off her feet, to sitting down, is a blur of noise and colour. 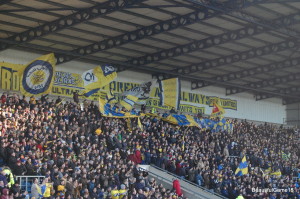 The Kassam is unique in that it only has three stands, behind the goal to our right is a huge gap with the aforementioned Gala Bingo visible in the distance.

The stand to our left however, is what you might call the ‘Ultras section’, OXU’s very own ‘Yellow Wall’ is decorated with huge banners “against modern football”, “Forza United” the biggest of all states “time for heroes” and makes up for the slight quirk of the missing stand.

As we take our seats a display of flags and Tifo on par with anything you would see on the continent is in full swing, and is by far the most we have ever seen. Flags of all different sizes and colours sway back and forth whilst a huge Tifo stretches out across the middle of the stand “all we need is Oxford”.

Some people use their hands and some their programmes to shield their eyes from the blinding sun peaking over the stand opposite. In the top tier a large yellow and blue banner of the club’s crest is unfurled above the heads of the fans.

Part Two of the trip to the Kassam Stadium will be on Back Page Football tomorrow.