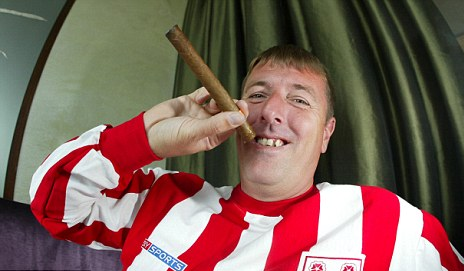 ‘He puts in the miles’, ‘he works his socks off’, ‘he covers every blade of grass on the field’ – these are the types of clichés that you definitely won’t hear commentators attach to the players listed below.

Blessed with equal parts other-worldly talent and incomprehensible laziness, they lope around the pitch (sometimes not even getting that far) seemingly unfazed by the sheer hair-pulling frustration they’re causing supporters.

In no particular order…

Guernsey’s biggest (er…) export besides SpecSavers, Le Tiss set the benchmark in terms of Premier League laziness. Big Fat Matt’s body was a sort of miraculous processing plant that took donor kebabs in at the top end and produced wonder goals at the bottom. In his autobiography, the brilliantly named ‘Taking Le Tiss’, he admitted to cheating on daily fitness runs with his team. All he did, and this is very clever, you’ll kick yourself, was be the greatest player to ever play for the club and thus nobody can really make an issue of it. Genius. If he was lazy off the pitch, on it he was a veritable hedonist. Rather than lying on a bed being fed grapes, he stood roughly mid-way inside the opposition’s half occasionally receiving the ball, knocking it 3yds ahead of him and having pot shots at goalkeepers (usually Tim Flowers). He also likes the odd mazy dribble and free kick.

He wasn’t half bad was he? What really lumps ‘Le God’ in with the laziest of them is the ‘what-could-have-been’ factor. Clearly one of the most talented English players off all time, he never challenged himself by stepping up, with all due respect to Southampton, to a bigger club. Enjoying his comfy life at The Dell, he collected a lowly 8 caps for England. Jermaine Jenas has 21…

It’s probable that nobody fits this list more accurately than Dimitar Berbatov. An enigma of a player, the beautiful Bulgarian took the Premier League like me to watching an episode of Countdown with Rachel Ri-. Sorry. He joined Tottenham in 2006 and took very little time to set the Premier League on fire. His displays of elegance and poise, as well as an arrogant swagger, immediately caused comparisons with Cantona to be drawn. He engineered a well-deserved £30.75 million move to Manchester United where his luxury tempo has seen him more often than not relegated to bench-warming duties. However, nobody can deny the outrageous talent of the Bulgarian. One of the most immaculate first touches in the world allows him enough time on the ball to play in slow motion. His laziness is sometimes interpreted as ‘being composed’, but we know the truth; he’d just really rather be somewhere else.

He once stated in an interview that his real loves, rather than football, are painting and playing basketball. Painting – right up his alley, but it’s hard to imagine him playing basketball. Presumably he’d just stand at half court smoking a cigarette and spinning the ball on his finger.

The fact that Michael Owen’s pride and joy racehorse ‘Black Panther’ has more wins this season than Owen has starts for United is a pretty damning indication of his lack of motivation. He burst on to the scene at Liverpool at just 17 and quickly established himself as one of the paciest and deadliest finishers in the country. Far from the languid displays of the others on the list, Michael Owen was ran himself ragged on the field. Then he decided he fancied a ‘challenge’, or as the rest of us would call it, ‘a chance to sunbathe and play golf in sunny Spain’. He wasn’t too bothered about having to sit on the bench for Real Madrid until his, until then nailed down, England place was called into question. Then we saw the hungry Owen of old score about 50 goals in 10 games (well, 13 in 36). A return to England, now with Newcastle, saw him adopt an even lazier approach by refusing to net with his feet. It was all headers now – requires much less running.

And finally he got to the place he’d yearned for all his career – the bench at Old Trafford – where he can at last exchange his football boots for a fancy top hat.

The only man in the world who can produce ridiculous ads for Crisps on an almost weekly basis and still be considered cool, Lineker holds an astonishing record for playing 567 games over 16 years and never receiving a yellow or red card. That’s pretty impressive, but then again, he only challenged for the ball 5 times. He prides himself on that perfect record, but it’s also demonstrative of his unwillingness to work when his team didn’t have the ball.

What he lacked in defensive motivation, he made up for in absolute perennial goal poaching. 330 goals certainly is a phenomenal haul, even if he did score the last 9 during a 2-year twilight holiday at Nagoya Grampus Eight in the J-League.

“When the segulls follow the trawler, it’s because they think sardines will be thrown into the sea. Thank you very much.” – Eric Cantona

Um… you’re welcome? Let’s face it, the Frenchman was to football what Rachel Riley is to Channel 4’s Countdown – a beautiful genius and every man’s guilty pleasure. King Eric’s chip against Newcastle and subsequent collar-up proud-chested pomp is still one of the most iconic images in Premier League history. Philosophical Cantona was a majestic footballer who gracefully and effortlessly glided across football pitches. Well, he glided forwards anyway.

It may be controversial to include Cantona in this last because he was very capable of putting in a work-man-like performance every now and again, but given his laissez-faire body language and his decision to retire prematurely, Eric the Red makes it in. C’est la vie mon frère. Pomplemous.

‘The Lazy Magician’ grew up a pauper on the streets of Buenos Aires before making it big. Riquelme’s extraordinary talent made him so popular with Argentinian club Boca Juniors, that when he left to join Barcelona, grown men were crying at the airport… probably. He played only a handful of league games at the Nou Camp before finding his feet at Villarreal. It was there that his career blossomed and he was recognised as one of the most influential ‘old-style’ playmakers of all time. When I say ‘old-style’, I mean the classic sublime cultivated number 10. He sat in the hole and pulled the strings and did so with ridiculous flair.

Unfortunately, he was almost as lethargic as he was brilliant. The Argie schemer was often guilty of giving the ball away recklessly and not tracking back. His poor fitness coupled with homesickness and general laziness meant he spent his last few years at Villarreal whinging about going home. He did go back to Boca, reportedly playing for free for several months, where he’s currently still pulling the strings and nutmegging David Trezequet (yep, he plays in Argentina too!).

Oh, and he also won an Olympic gold medal in his spare time.

One of the most expensive transfers in world football, €69 million, took Zlatan to Barcelona and made him arguably the priciest flop of all time. Unplayable when he feels like, the Swede boasts explosive pace, delicate feet and a foot like a traction engine. Unfortunately, the patches of form can often come few and far between. He’s been described as selfish and disruptive by managers as well as being mercenary-like in his transfer dealings.

Taking Cryuff’s advice, Zlatan Ibrahimovic was on the first Eurobus back to Italy.

There’s a very crucial difference to be made between lazy players and those who are simply just very slow. Van der Vaart is the both. A fearsome strike, beautiful ball control and precision passing are the attributes of world class footballer, but VDV has always been held back by his poor fitness and nonchalant striding around the pitch. Ability wise, he could have easily held his own at Real Madrid but his status as a luxury player restricted his game time and damaged his prosperous career.

He moved to Tottenham for pittance and set about a resurgence that saw him narrowly miss out on PFA Player of the Year. Rafa’s talent again undoubted but his work-rate severely questioned, he faded in the second half of his first season in the Premier League and regularly struggles to complete 90 minute matches, but he is adored by fans of the clubs he plays for.

In his defence, you have to be very talented to get away with saying things like “If I have to chase after an attacking full-back every time, I can’t play my own game to the best of my ability”.

Gasp. The Argentine striker would quite easily make his way into the exact opposite of this list, but his recent antics have meant all his bulldog-like hard work has been for nothing. Throwing your toys out of the pram and refusing to play out of sheer petulance is inexcusable, and he’s not only one on this list either; Messrs’ Berbatov and Ibrahimovic, take a bow. Tevez has now gone half a season for Manchester City without playing a game while pocketing a fireman’s annual salary every day. He’s trying to organize a move closer to his family in Argentina (which would be admirable if Milan was closer to Argentina than Manchester…) but at the same time refusing to budge on his extortionate wage demands or agree to a mutual contract termination.

Basically, he wants to have his cake and eat it, except in this case, the cake is made of £16 million.

A deadly finisher in his day, Ruud had an uncanny knack for appearing just in time to tap in from close range. Few men lived in the 6-yard-box like Rutgerus Johannes Martinus van Nistelrooy and he wholeheartedly loved scoring goals – 150 in 219 appearances for United alone. A holiday in sunny Spain, where he continued to score all around him, changed little about his style of play. His lack of work rate and abandonment of defensive duties was really only notable during his, albeit rare, barren spells, but Ruud was never one for a strong challenge or 50-50 tackle. His 1-in-2 scoring rate for his native Netherlands, though, puts him up there with the very best strikers to play the game. When he could be bothered that is.

If you’d been living under a rock for the past 7 years and emerged to see Adebayor playing for Spurs, you’d immediately judge him as being a hard-working centre-forward who holds the ball up well but doesn’t score enough. You’d be shocked to find out that not so long ago, Ade was lazing about upfront for Arsenal and Manchester City without a care in the world but also hammering in the goals from all angles. His transition from layabout to work-horse is baffling but totally in character with his general modus operandi; work hard for a few months, earn a cushy long contract, sit back and relax.

The Togolese forward is already starting to show signs of getting comfortable at Tottenham, having established himself as the main man. Only time will tell if Redknapp can light a rocket under his behind again. Or he could go back to Man City, where Mario Balotelli will gladly supply the rocket.

I'm a Journalism student living in Ireland and full-time football fanatic. I write and I talk all sports - from Ladies Gaelic Football to Cricket. Disagree? Get in touch @whyAlwaysMike