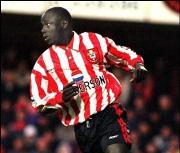 BackPageFootball takes a trip down memory lane to remember the greatest tall tale ever told in the Premier League.

You’ve all heard of George Weah right? Former AC Milan striker. Won the FIFA World Footballer of the Year and European Football of the Year awards. Yep, that’s the guy.

It’s 1996 and Southampton are in the middle of their annual bid to stave off relegation for another season when manager Graeme Souness receives a phone call from a man claiming to be the aforementioned Weah saying he has a cousin that would be a perfect fit for The Dell.

Apparently the cousin in question, Ali Dia, had played for Paris St. Germain and had 13 caps for his country so the decision to snap him was a no brainer.

However, unbeknownst to Souness, ‘Weah’s relative’ had only recently failed a number of trials with lower league clubs before giving the big time a crack.

Saints legend Matt Le Tissier recalled the signing in an article published on The Guardian website in 2008.

“I only really trained with him once, on the Friday before the fateful day,” said Le Tiss.

“He joined in the five-a-side on the Friday morning, and was introduced to us as a triallist. I remember at the time thinking: ‘He’s not very good. He’s probably not going to make it’.”

But Dia did make it. Against Leeds United he was named on the subs bench and when Le Tissier limped off injured after 32 minutes, he was thrown in at the deep end. What followed was possibly the most the most appalling 53 minutes of individual football seen in the Premier League.

Having obviously realised what a massive cock up he had made, Souness tried to save some face by hauling Dia off but the damage was done as Leeds ran out 2-0 winners.

“The mood was pretty sombre in the dressing-room afterwards, so we didn’t really discuss him then,” said Le Tissier.

“I think on Monday morning it was probably more of a topic. By then he was gone, never to be seen again. Apparently he came in for treatment on the Sunday morning, according to the physio. He was told to report again on Monday, and he just did a runner. I don’t think he paid for his hotel bill or anything.”

After leaving Southampton, Dia resurfaced briefly at Gateshead where he was again not very good before quitting the game altogether to study business at Northumberland University in Newcastle.